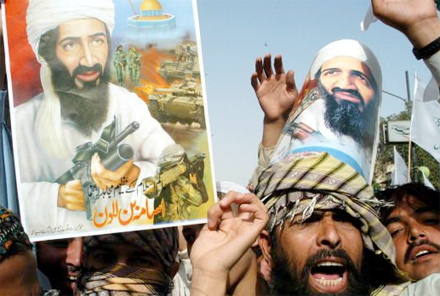 The killing of Bin Laden sparked a wave of conflicting feelings and political and journalistic analysis. Undoubtedly,  the death of such murderous creature, especially when he holds the top position within a reactionary and terrorist political-ideological network does not raise anybody’s compassion or sadness but his own supporters. Surely, the world is a safer and more humane place without the likes of Bin Laden, Khamenei, and all the leaders of the Islamic regime of Iran, the leaders of political Islamic movement and the leaders of state terrorism. This is an undeniable reality. However, the feelings about his death are not limited to happiness or excitement. The feelings that the ideologues of reaction create deserve review and concern. Reports indicate a rise in nationalistic sentiments in the USA. In his speech announcing the killing of Bin Laden, Obama played the nationalist card: “Today we were reminded that as a nation there is nothing we cannot do” As expected, this nationalistic message was the prelude to a wave of US jingoism and nationalism.

On the other side, by proclaiming “national sovereignty”, the reactionary opposition in Pakistan tries to spark a nationalist-antiWest atmosphere in Pakistan and hence invest in gaining power. In Afghanistan, the forces that were put in power by state terrorism, following the September 11 tragedy, (that have embezzled funds for themselves and their families), pretended to be the victims and announced that NATO forces did not listen to them and bombarded the country in pursuit of Bin Laden, when all along Bin Laden was in Pakistan. The Islamic regime of Iran too made a mockery of the US might. These are all the forces that belong to the rank of creatures whom the world could do without and the world would be a safer and more humane place. However since we live in an upside down world, each one of them is capitalizing on the death of Bin Laden. The point is that none of them represent the pain and suffering of the people who are doomed to live under Islamic terrorism. They do not represent millions of people who have lost their lives during the war of terrorists, or the people who have lost everything and witnessed their loved ones drown in blood. These forces have intensified the war of terrorists, have turned a whole region into ruins and the society into a cemetery, and pushed the youngsters into the arms of Islamic terrorism. If there were justice in the world, all these creatures should have been tried for crimes against humanity.

There are fundamental questions beyond these reactionary measures for profiting from Bin Laden’s death, beyond the US nationalistic sentiments and beyond death of Bin Laden. Will the war of terrorists intensify after Bin Laden’s death? Will US/Pakistan relations become sour? Will the NATO forces leave Afghanistan? These questions are being reviewed in journalistic roundtables. However there are two more questions that nobody is bothered to ask: Does the timing of this operation not have any connection with the situation in the region and the ever changing political upheavals following it? Should the negotiations between Fatah and Hamas and their speedy agreement on cooperation and unity in Cairo not be linked with the US operation, and the new extensive US strategy in the Middle East? These questions must be addressed.

The world after Bin Laden

The war against terror, which is the code name for the devastating wars instigated by the West led by the US government in the last decade in the Middle East, (what we rightfully called the war of the terrorists), were waged following the terrorist attacks on the Twin Towers in New York and other air attacks elsewhere in America by al-Qaeda. The New World Order policy of Bush and Thatcher which was implemented after the fall of Soviet Union and under the pretext of Iraq’s invasion of Kuwait, was given a new lease-of-life by waging war, i.e the “war against terror”. The US administration under Bush Junior, found a very useful excuse and opportunity to demonstrate its might and establishment of its New World Order agenda. The war of terrorists dominated the world after September 11. Millions were killed, injured and made homeless. The share of people of Afghanistan was numerous bombardments, empowerment of Loya jirga consisting of tribal and religious fossils. In addition, state terrorism appointed a no-name lackey as the president of Afghanistan, giving him access to millions of of dollars of aid, bribes and the like. The people of Afghanistan have become poorer, more devastated and suffering while the new self appointed rulers have become richer and more united in their attempts to rob people and devoid them of rights.

Iraq has been turned into a huge cemetery. More than 1 million people have been directly or indirectly killed as the result of the war during the past 8 years. Masses have been made homeless. People have been displaced and given Shia and Sunni identity. Religious and tribal sectarianism was intensified under the name of democracy. The state of political Islam and Islamic terrorism in Iraq was strengthened. The war of terrorists was brought in the heart of Pakistan. Thousands in Pakistan have lost their lives during the past two years as the result of terrorist operations. A million people in Pakistan became dispersed with nowhere to go following the attacks by Taliban. The war was extended to Lebanon. The situation of Palestinians worsened. During the past decade, the whole of the region has been directly or indirectly affected by the war. The threat of terrorism is a constant threat over the people. This is the result of a decade of war of terrorists for the people of the region. In the West too, many civil and individual rights have been abolished under the guise of combatting terrorism. In US, prisoners are tortured and such actions are even defended. Citizen’s lives are under direct control of the state. The world, as we correctly predicted, turned into a darker and bleaker place. The two poles of terrorism plunged the society into more reactionary state.

Now, after the death of Bin laden, the leader of al-Qaeda, the mastermind and the responsible figure for killing of thousands of people in terrorist operations, some are optimistic that the war of terrorists will end. Their argument is that by hunting down the perpetrator of the war, the war ends. Some are worried that the war of terrorists will intensify. Their argument is that al-Qaeda and Islamists will take revenge and the world will witness an escalation of terrorist operations. The fact is that, with Bin Laden’s death, merely a new chapter of the book of terrorist war is turned. This war will continue with other excuses and pretenses. Bin Laden’s death will not affect the intensification or weakening of this war. Bin Laden was merely the excuse to start the war. He was not even mentioned a lot recently. To end the war of terrorists, the root of terrorism and its material basis must be annihilated. It is precisely here that it seems that the timing of the operation to kill Bin Laden, following the mass protests against despotic and dictatorial regimes for freedom and justice, is part of a new strategy adopted by the vis a vis the region.

The timing of this operation is questionable. It is said that Bin Laden lived in Pakistan for more than 5 years. He lived in a 1 million dollar villa only 4 kilometers from Pakistan’s military academy which is under tight security and surveillance, and 60 kilometers from the capital Islamabad. These facts make the picture more complicated. The Us administration’s conflicting reports started only a few hours after Obama’s announcement. The facts were changed every hour. It took the Pakistani government almost a week to show any reaction. At the same time, during the past two three weeks, after disclosure of dealings behind closed door between Fatah and the Israeli government, it was announced that with the intervention of the Egyptian government, i.e army, Fatah and Hamas have signed a deal for a unity government in Cairo. Apparently nobody has given a second thought to the Israeli government’s objections. The American government has not made any official remarks. However, looking a bit deeper and putting two and two together one cannot but conclude that this deal has total backing of the US. The Egyptian army is appointed by the US. Fatah is ruined without financial aid from the US. How come, following the overthrow of Mubarak, this becomes the first mandate of the newly formed government of Egypt? It seems that these two recent events which happened with two three weeks of each other have direct link to the unrests in the region and the protests by the down trodden people of the Middle East and North Africa. It appears that the us administration, the leader of the pole of state terrorism, has realized the potential explosive situation and is trying to adopt and use a new strategy to maintain its power, influence, the basis of capitalist system and prevent the revolutionary forces or the extremist Islamists from taking power.

It seems that the turning of the page of war of terrorists is an important element in this new strategy.

The September 11 tragedy was a good excuse and opportunity for the US to attack the region and establish its New World Order agenda and hegemony as the super power. Hunting Bin Laden in the caves of Afghanistan was an excuse and justification for the attack in the region. The expansion of the wars in Iraq, Lebanon and Pakistan, under the name of war against terror, were the bloody manifestations of this reactionary strategy. This war will not end by the death of Bin Laden, who was raised and found such position under the wings of US. An end to Islamic terrorism is completely dependent on resolution of two main issues in the region. To marginalize political Islam and Islamic terrorism, more than anything else, the question of Palestine must be resolved fairly. Formation of an independent Palestinian state with all rights is the main basis for such process. The Palestinian question has been an infected soar in the region. The Islamists thrive on it. They use the misery of millions of people for the pursuit of their own reactionary aims and policies. The second issue in the marginalization of Islamists and combating political Islam is the revolutionary overthrow of the Islamic regime of Iran as one of the main leaders, the most important source of funds, military and ideological support of this movement. When these two issues are resolved, Islamists will be marginalized.

The recent events in the Middle East and North Africa, the pouring of toiling and suppressed people into the streets for freedom, equality and prosperity in the region quickly led the political-strategic equations of the reactionary forces into a disarray. It was like a social earthquake. The world was speechless towards these developments and mass uprisings which spread from one country to another. It has raised the support and salutation of millions of oppressed and freedom loving people. In fear of losing its power, the world’s reactionary forces come up with new tactics every day to quell the situation. They try their best to end such developments with the least damage or change. The protesting people of the region will have the most influence in the political change and developments.

AUTHOR
Azar Majedi is the founder of the Organization for Women’s Liberation-Iran and at present is acting as its chair. Visit azarmajedi.com.