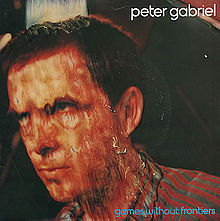 Games without frontiers is from third Gabriel’s eponymous album. It addresses futility of war and nationalism, and throughout the song there are references to historical characters from Hitler, to Chiang Ching.

The first video is from performance in Athens back in 87; the film is
called P.O.V and was made by Martin Scorsese-Just look at the images of
children…