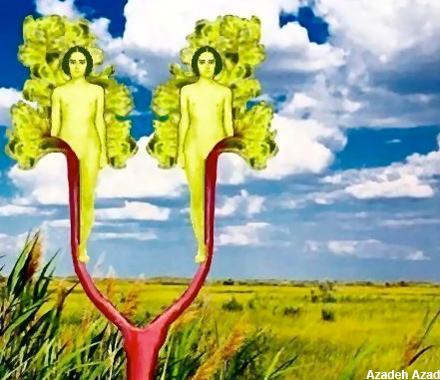 Splendid is Goddess
Esphand, Supreme Goddess of Earth
whose fertile thought of conceiving woman
and man sparkled on a late April day, lingered
latent in her wet scented womb,
for forty years.

In the wake of forty years,
she willed a rhubarb plant to sprout
slowly from her golden egg, her seed of life,
in the sacred soil of her womb, a rhubarb
plant with one single stem
and fifteen leaves.

As Mother-Earth Esphand
chanted her strand of hymns
she made the scarlet stem split
Into two branches superbly knit
by love, Mashi and Mashiana,
two gleaming green silhouettes
same size, same self, serene jets
of life, with no navel and no trail
one could not tell apart the female
from the male.

Mashi and Mashiana,
grew up to the ancient sea of grass
to the smell of poplar trees and silver sage,
to the far-off birds that called to them,
took a path through forest steppes,
to the slink of river light, a night
of the full silver moon, shifted from
plant figures into half-humans / half-plants,
breathed in the soft, silken air, their flair
for food and wear, dressed in leaves and reeds,
munched on fruit and seeds, roamed
the shores of the Caspian Sea,
the forest wilds, the rolling green
hills of tea, hand in hand, for thirty
days and thirty nights.

Mustering and hunting food
in places most remote, planting tree
seeds in every abode, they reached the
foothills of the Zagros, met a white-haired
nanny-goat, sucked its milk, a creamy sea
from a mammal who fed on plants
for thirty days of hunger-free. Thus they
mixed and matched a boundless white to
their cherries and berries, and the taste of
milk clotted in their mouths.

On this trail-blazing journey,
was a sheep on their line of sight,
white muzzled with black wool
they killed it with their hunting tool
their first prey that partook of grass.

At that pass, under the Dog Star
surfaced the Sacred Cow, avatar of
Mother-Goddess, to guide them light
a good fire with ziziphus branches
en masse. They roasted the sheep,
threw a handful of meat into neat fire
and said, «This is for the fire we admire,»
threw a slice to the high sky and said,
«Goddesses’ share from the Earth’s mire»
Then they quenched their hunger
under the wonder of the Sacred Cow
and felt complete.

As they ate meat,
Mashi and Mashiana became wholly
human, sexed and perplexed in the chilled
autumn wind, and the Sacred Cow whispered
in their ear: You are parents of human race,
live by loving thoughts, soothing words,
and caring deeds.

Human making happened on the
Festival of Autumn, Day of Mehregan,
time for goddesses and gods
to harvest their deeds and dance
on Mount Damavand where they
live to this day.

Mashiana birthed
seven daughters, seven sons,
unearthed a burning fire in her mind
for a more refined life as the couple
coated itself in sheep skins in winter cold
and built pro tem shack and shelter
shunning nature’s welter
of whims.

In time, plant-minded
Mashi and Mashiana settled
on a farming field to grow food,
spun fiber and goats’ hair into yarn
made summer cloth and clothes,
made sure their descendants kept
the sacredness of plant alive,
as the foremost form of
the first humans.

Their grown children,
seven pairs of them, bereft of
headway, left for seven lands
of the world with open hands.
Mashi and Mashiana carried on
their well-environed lives as
denouement.

Until on a common evening,
a thousand flying horses
darkened the mauve horizon
and landed in their dream.