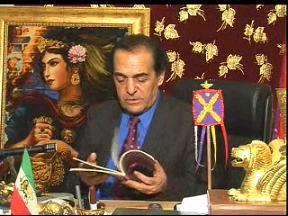 Several years ago I visited Iran to see my
family. It was muharramh and winter
so I wasn’t spoilt for choice about how to spend my leisure time in the in the
Islamic Republic. The only thing to do was to watch satellite TV on the sofa
following a string of mehmun bazis
with a pot bellyful of ashe reshte.  A family member who I shall only refer to as
uncle hated most of the Iranian stations broadcasted from the USA not because
he shared any love for the regime but because he had more of a ‘what do they
(Los Angelese residents) know about what happens here’. Poor Zia Atabay was the
TV presenter who was usually the target of his bile.

However, there was one, just one channel which
managed to earn my uncle’s seal of approval. ‘Now this man talks sense’ said my
uncle with such exacting standards. On the TV screen appeared a dapper looking
man with get black hair gelled back like Bella Lugosi in an unremarkable
looking background which was probably his own living room doubling as a TV
studio. You would be forgiven to mistaken him for a nineteenth century vaudevillian.

With a shoe string budget from a small
office in north London Frood Fouladvand, or ostad
as he was affectionately know,  would put
to shame the Irangeles TV stations
and break the greatest taboo in the Iranian community by openly denouncing and
criticizing the tenets of Islam. He lived and breathed Iran. There was no
messing with him and his intention to physically and culturally liberate Iran.
His TV station was filled with Iranian iconography and the pre-Islamic derafshe kavaiani flag was proudly displayed for all to see. Fouladvand
would serenade his viewers with tales of Iranian folk heroes such as Babak
Khoramdin, Abo Moslemin Khorasani, Kaveh the Blacksmith from the Shahnameh
legend .There were no peroxide blonde Iranian housewives with Barbie like
noses and fake boob jobs talking about expensive skin moisturisers and
exfoliators; there were no shrinks giving advice to dysfunctional families
suffering from substance abuse; there was no lawyer in a pin striped suit
giving advice on getting a green card; there was no scantily clad Iranian girl
dancing to some rubbishy techno tune. According to Fouladvand, these folks had
become complacent with their status in exile and Iran was merely an afterthought.
Fouladvand’s pioneering and controversial approach was simple: he sat with a
copy of the Koran (or Tazinameh ad he
called it)  and in fluent Arabic he would read it from cover to cover
translating  into Farsi the
idiosyncrasies, contradictions and passages inciting violence towards
non-believers. He would also turn to the Hadiths and various historical books
to support his claim that Islam wrought havoc on Iran. His intended audience
was the generation of Iranians who were blindly reverent and unquestioningly
faithful to Islam in spite of Khomeini’s excesses. According to Fouladvand
not only was Khomeini conducting himself as a Muslim but a very good
Muslim.  Watching Fouladvand was a treat.
His demeanour would change from Hitler style harangue to stand- up comedy
depending on his mood. His timing was perfect. His wit and even his insults
were ingenious. I still laugh when I remember Fouladvand  making
callers to his channel forfeit a dollar
every time they accidentally mentioned ‘salam’ or inshallah’.
Fouladvand’s brilliant onscreen charisma towered above the likes of Moshiri,
Atabay and Shahram Hmoayoun.

Despite  Fouladvand’s contempt for
Islam he never tried to apostolise Iranians to another religion. He criticised
the Parsis in India and the world Zoroastrian community for what he perceived
their abandonment of Iran.

He
wanted  the Koran to be read and
understood warts and all for each person to formulate their own opinion.


Fouladvand’s greatest accomplishment was not about bringing IslamIphobia into
the mainstream but his unequivocal understanding  about the purpose of  Iranian monarchy.  He was equally unkind
towards Reza Pahlavi as he was to the Islamic regime. Using the Shahnameh as an
inspiration and borrowing examples from history where inept and weak willed
kings were overthrown Fouladvand believed that the Shah must possess the
metaphysical far – a person who deserved to wear the crown of Iran by
demonstrating inordinate courage. The crown of Iran was not an heirloom passed
down from father to son only for the privilege to be taken for granted. The monarch was there to serve Iran. For
Fouladvand Reza Pahlavi made himself irrelevant – an opinion which is
increasingly privately shared  by his supporters  who have become disenchanted by Pahlavi’s
unsuccessful passive resistance  against
the Islamic Republic. He even tore into Pahlavi’s choice of Arabic names for
his two daughters Iman and Noor as evidence of Pahlavi being tainted by Islam.

By now Fouladvand’s uncompromising position
towards Islam and the Islamic Republic had won him enemies. He ran into trouble
with the UK Home Office and he was arrested once in 2003 under the Prevention
of Terrorism Act for allegedly inciting terror overseas. The accusations proved
baseless and he was released a short while later without charge. Although
Fouladvand found refuge in England he said repeatedly that his only home was
Iran; its liberation was his mission and his life was small sacrifice worth
paying for it. His organisation had already captured world media attention by
taking civil disobedience to a new level when his followers staged a sit in
protest on a passenger airline and climbed on top of the arc de triomphe to
sprawl out a giant sized defashe kaviani
which fluttered magnificently in all its splendour on the Paris traffic below.
He called on the head of  foreign states
to seize relations with the Islamic Republic.
However, Fouladvand like most Iranians was suspicious of foreign
governments who he saw as aiders and abetters of the IR. The fate of Iran was
in the hand of Iranians.

In
2006 he announced that he conceived a plan to liberate Iran without the
slightest bloodshed and asked his followers only for moral courage and
donations for his mission. He likened himself to Arash the mythical archer who
literally put his own life into the sling to be used as an arrow against the
enemy of Iran. He denounced violence against the regime but never revealed the
details about how he was going to execute his plan. He also disassociated
himself from acts of violence which the regime in Tehran accused his
organisation of having carried out. Iranians reacted with scepticism and
ridicule. There was reason to be. A few years previously a US based presenter
Hakha promised to execute an epic overthrow of the regime which turned out to
be an elaborate hoax. To his credit Fouladvand did not promise an overthrow of
the regime with all guns blazing but after his disappearance it appeared that
he wanted to organise a mass movement with the help of his contacts in the
Kurdish resistance movement. Unlike Hakha, Fouladvand delivered on his promise
to do something and set out to the
Turkish border. In the first weeks of 2007 images of Fouladvand and his small
entourage were broadcasted regularly. He was self assured in his moral
imperative and righteousness of his cause. Then in 2007 the images stopped and
there was no news of the great ostad.
Speculation was rife that he was ambushed and abducted by IR terrorists. Others
were less kind and accused him of bottling out taking the cash he gathered for
his mission with him. The truth is that nobody knows. His anjoman became fractured: his associate Banu Rozita was convinced
harm had come to him which caused the rancour of the rest of the organisation
who tried to censor any talk that Fouladvand could have been murdered because
it would harm moral. After Fouladvand’s death the Anjoman continued
to broadcast for a short period of time. The great ostad was replaced with a fellow called Houshang with a silly hat
and farvahar emblazed on it. I soon
realised that the anjoman had died
with its leader. Even before Fouladvand disappeared or died (depending on the
version of events you believe) other news programs tried to copy his nostalgia
for ancient Iran by bringing their own historians who would recount stories of
Iran’s glorious past but none of them surpassed Fouoadvand. Fouladvand had
branded Iranian renaissance. No one else came close. However, the great man was
not without his flaw. Occasionally, his passion would overwhelm him and his
insults repelled the people he tried to win over. His belief that the Bam
earthquake was artificially contrived by the Islamic Republic bordered on
paranoia. The real Fouladvand, born Manochehr Fattolahi,  was also an enigma and there were also
unsubstantiated rumours  that people
claiming to be members of his organisation contacted affluent members of the
Iranian community threatening to expose their links with the Islamic Republic
if they did not pay a ransom. Nevertheless, Fouladvand’ firebrand nationalism
was an inspiration to me and many other Iranians. He drew a wedge between Islam
and Iran explaining that they were polar opposites. I probably would have been
at the receiving end of Fouladvand’s insults given my support for military
intervention in the form of airstrikes on the Basij and Sepah units. Fouladvand
was an idealist but in his death I also realised that the task of liberating
Iran is not assigned for one man even if he was great as the ostad . The courageous protesters who
took to the streets paid with their blood like Fouladvand were doomed to be
defeated against the might of the greatest terrorist regime on the planet. The
mass movement whimpered away with its phoney leaders Mousavi and Karoubi only
flickering here and there before being stamped out by the Islamic Republic’s
iron fist.

Iran will not be saved by a sacrificial
lamb to the slaughter or Kaveh the Blacksmith from the Shahnameh. The images of
the Chinese protester standing in front of a tank in Tiananmen Square or Neda
Soltani’s last moments before she was gunned down by a Basij terrorists are
merely symbols of resistance and nothing more. Symbols do not change the
reality on the ground.

The regime can only be changed with the help
of outside intervention and this is a reality that very few Iranians including
Reza Pahlavi accept. Fouladvand may have been unsuccessful in removing the
regime but his memory and the service he rendered for Iran will always be
remembered but perhaps never appreciated by an ungrateful nation which has
scorned anything of value. God bless his memory.