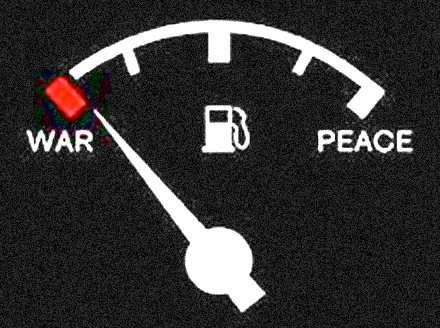 Reflecting on the July 4th weekend, I’m struck by how we traditionally use the holiday to commemorate our war heroes. While I have tremendous respect for those who serve in the military, 21st century citizenship needs to reframe the meaning of nationalism and civic pride as a commemoration of Peace, not War. In the ecology of the new millennium, War is, more than ever, a zero-sum game for all involved. We are beginning to understand that there are no longer any winners in War. Instead, we must wage Peace.

For July 4th, I spent a very enjoyable evening at the Hollywood bowl, serenaded by, on the one hand, the Hollywood Bowl orchestra playing appropriate classics (Sousa to Berlin), and, on the other hand, Hall & Oates performing their greatest “Philly Soul” hits.

But I felt sad when conductor Thomas Wilkins, playing a medley of the Armed Forces service songs, called on veterans of each branch to stand as their theme was being played. The audience clapped with gratitude as each group stood up — older veterans from WWII and Viet Nam, as well as younger men and women from the last 20 years of our fairly consistent military engagements. I could not help feeling that certain key insights were eluding the audience, and by extension, our nation…

War is no longer sustainable. As an institution, the costs and the rationale for War are no longer a containable or a clear-cut proposition. Conflicts are ill-defined and objectives shift. Battlefields are no longer separate demarcations, removed from civilian centers. Enemy states, entities and combatants are not easily identifiable or categorized. War has become more and more about ideas and culture — no longer about territory or trade. Costs are so out of scale that few of us understand the true drain on our economy. Has anyone dared to quantify how our current and recent war budgets could be allocated to rebuild our economy?

War does not provide closure. If anything, since Viet Nam, we continue to be haunted by the meaning, the validity and the sacrifice of each conflict, second-guessing ourselves, and realizing only too late that our leaders’ calls to arms were often, at best, premature or misguided, and, at worst, corrupt. As our understanding of the emotional and psychological war damage to our service men and women has grown, we seem paradoxically unwilling to support veterans with the necessary resources to help them heal and successfully reintegrate into society.

Victory is fleeting. How can we ever forget “Mission Accomplished?” Eight years later, we are still embroiled in the same “mission.” Once again, War has become a more complex and unmanageable institution, reminiscent of George Orwell’s nightmarish vision in 1984.

So why, on July 4th, do we choose to ignore these disturbing realities, and wrap ourselves in a cloak of nostalgia and denial?

Why not choose to commemorate our Independence Day as a day devoted to Peace? Waging Peace is truly the business of the 21st century citizen. Civilization on the planet depends on it.

Peace is sustainable. An organized military force is a dynamic, precision team with great capacity to build as well as to destroy. Our military must be re-chartered to devote itself to true nation building — at home as well as abroad: grass roots building of sustainable farms, green factories, schools and hospitals, training of farmers, workers, managers, teachers, medics and local leaders. Let’s use our strategic strength and insight to develop institutions where they matter, not prop up useless, corrupt political regimes.

Peace provides closure. Building institutions and training people builds trust, friendship, strength, autonomy and mutual gratitude — gratitude on their part for the selfless service that we have provided, and gratitude on our part for the opportunity to make a difference. Veterans returning home from Peacemaking will have uplifting stories to tell that truly make us proud to be Americans: we will have changed the lives of people all around the world who need our help the most, and who will forever be grateful to us for using our might to serve them and make them strong.

Victory is everlasting. Waging Peace provides victory after victory. Each mission, from teaching a child to read, to digging a well, to growing a sustainable crop, to holding a local election, is a “mission accomplished.” We don’t need to spread democracy. We need to lead by example and spread universal human values: compassion, integrity and service. Developing fellowship with people in need all over the planet will reap its own rewards.

Is this an easy process? Can change happen overnight? Of course not. I am not naïve. But our current system, strategy and culture are not providing any measurable positive results. Why do we cling to them? Why not take steps in this new direction before it is too late? The change begins inside each one of us. If 21st century citizenship means taking greater personal responsibility in our own lives, I invite each one of us to turn to our neighbor and ask: “Do you think it’s possible that we could celebrate Peace instead of War?”

AUTHOR
John Tarnoff is a recovering film studio exec consulting at the intersection of content, education and digital technology