Why Did Iran Say “NO” 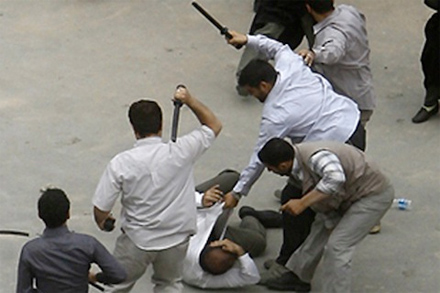 In March, the a resolution establishing a monitoring mechanism for Iran and appointing a Special Rapporteur. Last month, three candidates were considered for this position. The Iranian side, knowing that a Special Rapporteur would be immediately appointed soon, sent a message to Geneva that the Rapporteur on Iran should have three qualifications: Be a man, be a Muslim, and not be from an Arab country. One of the male candidates didn’t seem to cause any controversy for Tehran; Ahmed Shaheed’s appointment met all of Iran’s requirements.

The Head of the Iranian Judiciary had kept silence on the implementation of a special human rights monitoring mechanism since the approval of the HRC resolution in March leaving opposition to the resolution to the Iranian Parliament and the verbose Conservatives Therefore, it was assumed that during this time the Judiciary was assessing its position on permitting the entry of a the Special Rapporteur to Iran. In mid-June, , First Deputy of the Judiciary, said “The Islamic Republic will review the entry of the rapporteur.” No special rapporteur on human rights has been allowed to enter the country since 2005.

Considering the dire human rights situation in Iran, it seems that Tehran has found it politically very costly to let a foreign independent inspector visit the country. However, regardless of whether the Iranian Judiciary and Foreign Ministry allow the UN Special Rapporteur’s entry, Shaheed must present his report to the UN in September 2011. It is believed that Shaheed started his work even before his name was announced as the Special Rapporteur.

Iran’s lack of cooperation with the UN could lead the case to be discussed at the UN General Assembly in September, and most likely would increase political pressue on Tehran.
Over the past two years Iranian officials promised to cooperate with UN special mechanisms. For instance, earlier this year, Mohammad Javad Larijani, the Head of the Judiciary’s Human Rights Council, had said that they will cooperate with UN mechanisms.

But, why Iran wouldn’t be willing to cooperate with a UN special monitoring mechanism on human rights?

Since the 1979 Revolution, the Iranian government has been able to dominate its narrative of events through its gigantic propaganda machine. Iranian authorities deny any human rights violations inside the country and accuse Western countries, particularly the US, of politicizing the UN human rights body.

The rapporteur is most likely a challenge to the government’s narrative and will certainly reveal a new image of the Iranian government. In fact, the Iranian government is acutely concerned that the Special Rapporteur’s presence in the country might have uncontrollable consequences. Ahmed Shaheed is known to be a serious and ardent character, and Iranian authorities’ ability to influence Shaheed, a non-Arab and Muslim man, seems dim.

For Shaheed’s presence in Iran to be meaningful, cooperation of related organizations is necessary, in order to provide him access to documents, political prisoners, detention centers, prisoner families, political dissidents, and other resources. It would be meaningless for the Special Rapporteur to travel to Iran and not be provided with appropriate access to resources. The Iranian Judiciary and Foreign Ministry authorities know that under the present conditions in Iran, such access is fundamentally impossible. On the off chance that the Iranian Judiciary may decide to grant such access, Iran’s security and intelligence organizations would resist such a decision.

Three decades after the revolution, Iranian authorities continue to imprison and abuse political dissidents, however they are increasingly failing to silence their voices. Contrary to the 1980s and 1990s, names and detailed accounts of hundreds of prisoners are currently available on the internet. Many of those arrested after the election have sent letters from their prison cells, revealing prison abuse and torture. Hamzeh Karami, Mohammad Nourizad, and Abdollah Momeni are only a few of such individuals. When a political prisoner, such as Mohammad Nourizad, writes a letter to Ayatollah Ali Khamenei from inside prison, detailing the abuse and cruelty, it would not be too far-fetched to expect him to sit before the Special Rapporteur and tell him his experiences.

Therefore, it is also very likely that despite intimidations of political prisoners, their families, and human rights lawyers for not meeting with the Special Rapporteur, many of them would have insisted on such meetings.

Despite all political and moral pressure Iran faces worldwide, it has designed its narrative in such a way that it calls every UN resolution an American one, and instead of responding to the cases of human rights violations in Iran, it attacks Washington directly and offers instances of human rights violations in the U.S. It’s not surprising that attacking the U.S. on human rights appeals to some countries, particularly those that, next to Iran, bear a similar international pressure.

The Special Rapporteur’s presence could lead to a propaganda catastrophe for Iran’s government. One in which the distorted image the Iranian government’s judicial, security, and diplomatic apparatus have tried to portray of Iran’s human rights record, could turn into an ugly caricature, which would not leave any room for Iranian authorities to defend the alarming violations of human rights in the country.

In putting his report together, Shaheed will not face too many problems if he is not allowed to go to Iran. Currently, many victims of violence and rape, students who suffered education discrimination, religious minorities — such as the Bahais — many human rights activists and distinguished human rights lawyers who have served prison terms over the past years and left Iran after their release, represent valuable, live sources of information that the Special Rapporteur can use in writing his report.

The UN Special Rapporteur would also contact families of political prisoners and experts, via email and other types of electronic communication, in order to collect information. Those inside Iran, who would have avoided an in-person meeting with Shaheed due to security concerns and fear of persecution by security forces, are now in prime position to discuss their issues with him with peace of mind and without fear of being identified and any compromise totheir security. They will be excellent sources of detailed accounts of abuse, discrimination, torture, and unfair judicial reviews for Shaeed’s report.

During the past weeks, a lively momentum has been created amongst Iranian activists to help the UN Special Rapporteur in compiling his report on the country.

The Iranian Judiciary authorities face a lose/lose situation, no matter which path they take, they will pay a heavy price, domestically and internationally.