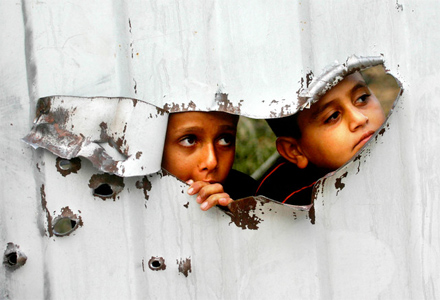 After over 60 years of struggle, terrorism and dictatorships a wind of change is blowing in the Middle East and the Arab world. This has also brought both Palestinians and Israelis to a historic turning point of reaching a lasting peace and coexistence among them. Palestinians through their successive leadership and theoreticians have long been on a wrong path of history. By continuing to believe that Israel and “Zionism” will one day vanish from their neighborhood and by clinging to terror and blind rocket attacks they have alienated themselves from the Israelis and Jewish people around the world.

Another mistake that many pro Palestinians are making is their insistence to equate Zionism with Apartheid and racism. This has closed the doors of solidarity and even sympathy between Arabs and Jewish peoples who are both from Semitic origins. Having used the fear of destruction of their state and even annihilation of their people, the governments of israel have employed more and more hard nosed military and repressive methods towards Palestinians and Arabs in occupied territories especially in Gaza.

The current Israeli leaders have no intention of making peace with the Palestinians because the current situation is in favor of their aggressive and expansionist policies. Today the state of Israel has become one of the most aggressive states in the world in violations of legal and human rights of millions of their neighbors as well as Palestinians. They do not recognize anyone’s (even Obama’s) idea of peace but their own version which will lead to a besieged, truncated and subordinated Palestinian state without any power whatsoever.

What is to be done?

In order for any meaningful change to happen first the people’s minds must change and develop beginning with each individual, be it Arab or Jew or any other religion or nationality. Palestinians must take the first steps by recognizing Israel’s right to exist and have their own form of government by renouncing terrorism and violence against civilians.

While they must continue their struggle and intifada for independence and freedom, Palestinians must also sympathize with their Jewish neighbors and residents of Israel. They should use diplomatic and educational methods to create more support for their cause throughout the world, especially in the European countries and the US.

Concretely, they must follow through with their unity plans between Palestinian Authority and Hamas and continue on the democratic path of elections and choosing different and more progressive leaders. They should also go ahead with their statehood plans at the UN and never back down from it despite pressure or intimidation from Israel, the US or the Arab states. They have long had the right of being a full and complete state and they must practice that while continuing to negotiate with Israel to expand the horizons of peace.

Last but not least they should eliminate the word Zionism* from their vocabulary as that only agitates and offends the overwhelming majority of the Jews and falls into the hands of both the anti-peace Israeli leaders and anti-Semitic Arabs and others with detrimental results for the Palestinian cause. There are many other words that can be used to describe the repressive occupying state of Israel and “Zionist” is not one.

There is another alternative to the two-state solution: If Israeli people and others do not accept a Palestinian state alongside a Jewish state, then Palestinians and Arabs within the occupied territories should demand full rights of citizenship within Israel. They can then participate in the same democracy that Israel is affording its Jewish citizens and vote to change the current government of Israel and even change the name of Israel back to Palestine (the ancient name that most agree with) and put an end to their conflict and live happily together as Muslims, Jews and Christians and any other minorities and non believers. A new society.

* There are many arguments about Zionism from both sides. Rather than getting into who is right and who is wrong (because this is a subjective matter and each rely on their own interpretations) I recommend that the reader study the philosophy and history of Zionism, its origins and its development.