We will be unstoppable 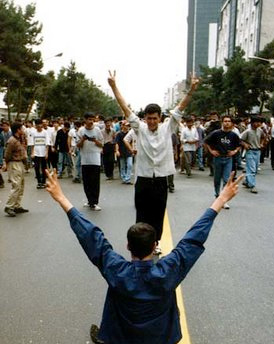 The first is, of course, Independence Day in the country in which I have lived for more than a decade. As Americans celebrate the Fourth of July every year, I think of a day when Iranians will celebrate the anniversary of the overthrow of the Islamic Republic of Iran. I imagine our joy at living in our own country without fear that a mere thought could land us in jail, tortured at the hands of government agents who love nothing more than drawing blood from its citizens.

Toward the end of the month, I remember the anniversary of the death of my dear friend and freedom fighter, Akbar Mohammadi. This year marks the fifth anniversary of his murder inside Evin Prison. He was brave to the very end, and every year I miss him more. I miss his courage, his spirit, and his undying loyalty to our student movement.

To stand up to a vicious government, one that does not subscribe to the idea of human rights, takes immense courage. What we have seen in the last seven months of protests from Tunisia and Egypt to Yemen and Syria, shows bravery and determination that is familiar to Persians. We have faced an ugly regime, and though we haven’t yet succeeded in ousting them, we are no less present, when we see other countries use what we have learned, to challenge their own dictatorships.

What I mean by this is that, as we remember the event that happened twelve years ago this week, what we refer to by the Persian calendar as 18 Tir, we remember a moment in time that started cracking the door to freedom open for the very first time. I was there. It happened. The student protests of 1999 started with the closing of a reformist newspaper, grew into more than 50,000 young people coming out into the streets of Tehran, and countless others who protested in cities all over the country. The protests ended with the imprisonment of thousands of those of us who participated. Back then, we were for the first time vocal in our questioning of our government. Before 18 Tir, people in our country wouldn’t dare come out in protest with slogans like “down with the dictator” or “down with Khameini.” We were the first, and the cost was great.

This happened during a Reformist President’s rule. The Reformist students under Khatami called us anarchists. We were not anarchists, but we wanted basic human rights and a government that not only had a constitution that was voted upon but the citizens of Iran, but that was also followed. We wanted democracy. We wanted freedom.

Today, those outside of Iran wait. Two years ago following the elections of 2009 in Iran, we saw the formation of what would be called The Green Movement. It started as another Reformist movement, but escalated over the next few months to represent more than reform. There is little doubt that the movement of 2009 got its start in 1999. Similarly, the movements in Tunisia, Egypt, Yemen, Syria, and Bahrain, to name a few, used the 2009 demonstrations as a model for their own protests. The opposition in Iran in 2009 saw some 4 million people come out in Tehran alone, to protest the regime. They Tweeted, posted on Facebook and You Tube, and got the news out to the world so that their voices were heard. Now, in what is being lauded The Arab Spring, demonstrators demand freedom and the world is watching. I believe Iranians inside the country are watching too, yet there has remained silence from within the opposition movement in the Islamic Republic of Iran.

For all of us outside our country, we scratch our heads, wondering how our Arab neighbors are finding their voice while our opposition hasn’t yet joined in. Mousavi and Karroubi remain under house arrest, yet the streets seem to go on with business as usual. In my mind, there are several reasons that the movement hasn’t rebounded.

First of all, as I have said repeatedly, I believe that we as Iranians need to unify. We are so splintered, from Monarchists to Mujahedin to Leftists, that we sabotage one another with looking more at our differences than the single most unifying concept that we share, which is removing the Islamic regime.

Next, in my opinion, the idea of reform instead of a complete overhaul of the current regime is the most counterproductive concept we could possibly pursue. I think we are kidding ourselves if we believe that reform would be enough, that a democratic Islamic government is possible. In Syria, Asad proposed reform, and the opposition flatly refused. The time for reform in Iran is past.

In 1997 Mohammad Khatami won the presidency in Iran. This was an important win in Iran for many reasons, but mostly because Khatami was proposing a government that was less run by conservative ideology and more open to true democracy. Khatami promised a change from the hardliner conservative approach that has been the order of the day for the Islamic Republic’s government since the 1979 Revolution.

At the end of the day, Khatami didn’t deliver.

The reasons that reform will not work in Iran are many, and the current Constitution of the Islamic Republic of Iran is at the top of the list. It is rife with contradictions and inconsistencies. All branches of government ultimately point to the divine power of the Supreme Leader who has god-like jurisdiction over an entire country—and beyond, if you believe the government there.

So we are left to wait. We come out from Los Angeles to London to show our support. There are reformists today who also believe that a secular government is a better choice for our country. When we unite with a singular voice for Iran, we will be unstoppable against the criminals who have been in power for more than 30 years. It isn’t a simple task, and in reality, it is a very complex challenge if we are ever to celebrate our own Independence Day.

Reza Mohajerinejad is an activist for the student movement in Iran, and was one of the organizers of the Iranian student uprisings in July of 1999 (18 Tir). His book, Live Generation, is about the events of 18 Tir and how the student movement back then was foundational to the current day protests in Iran.