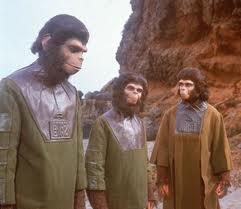 A 1968 American science fiction film directed by Franklin J. Schaffner predicts the future of Iran in 2011. The lead actor is Charlton Heston, he plays an astronaut, Taylor. After a 2006-year voyage at near-light speed (during which the crew ages only 18 months). The astronauts awaken to find their ship sinking. They have landed in the Persian Gulf near Bushehr, though this is not mentioned in the film. They use an inflatable raft to reach shore. Before departing the ship, Taylor sees the time is 2011 A.D.

The three astronauts set off through a desert, gradually encountering plant life. They find an oasis at the edge of the desert just a few miles away from Shiraz and decide to go swimming, ignoring strange scarecrow-like figures. While they are swimming, their clothes are stolen. Pursuing the thieves, the astronauts find their clothes in shreds, their supplies pillaged and the perpetrators — a group of unfortunate, poor iranians — contentedly raiding a cornfoeld for food, the women are covered in viels.

Suddenly, the basiji militia on horseback charge through the cornfield, brandishing firearms, snares, and nets, which they use to capture whatever iranians they can and kill those they cannot. Taylor discovers that the basiji’s, who can talk, are in total control and are divided into a strict caste system, priests, police, soldiers, politicians.

The movie was called the Planet of the Apes was well received by critics and is widely regarded as a classic film and one of the best films of 1968. The story was realistic and believable in that at no point during the movie did any of the astronauts put forward the idea of getting the basij apes and their society to pursue democracy as a future form of government. The movie did not require anyone to have unrealistic dreams or hallucinations and fairly portrayed the apes for where they were at in their level of development.

In 2008, the film was selected by Empire magazine as one of The 500 Greatest Movies of All Time. Science fiction has never been more accurate.