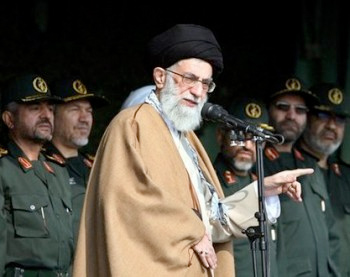 The ideological support for the Iranian regime is waning – liberal and democratic ideas have triumphed within civil society, says political scientist Nader Hashemi in this interview with Lewis Gropp. Hashemi has specialised in Islam and Politics. He is Assistant Professor at the Josef Korbel School of International Politics in Denver and the author of “Islam, Secularism, and Liberal Democracy” (Oxford University Press) and editor of the recently published “The People Reloaded: The Green Movement and the Struggle for Iran’s Future” (Melville House).

What influence do the protests in the Arab world have on the Green Movement in Iran?

Nader Hashemi: The pro-democracy movements in the Arab world, especially in Tunisia and Egypt, have reinvigorated and re-energized the Green Movement in Iran. Notwithstanding the differences in language, ethnicity and religious sect, politically, Iran and Tunisia and Egypt share many things in common, in particular forms of the authoritarian regimes that rule over them and a deep-rooted hunger for democracy and human rights.

Although the official permit for a demonstration was denied, supporters of Iran’s Green Movement took to the streets anyway. And the Iranian regime has reacted with fear and paranoia. In large part because they have been arguing that the Green Movement is dead, which it clearly is not. Hard-line members of Iran’s parliament publicly called for the execution of the leaders of the Green Movement. At the end of February they were arrested, along with their wives, and they are currently being held in an undisclosed location.

What exactly is the Green Movement’s agenda? Is it more coherent than that of the protest movements in the Arab countries, and is it entirely democratic?

Nader Hashemi: The Green Movement’s agenda is reform, not revolution. The leadership is still committed to advancing democracy within the framework of the existing constitution of the Islamic Republic of Iran with an emphasis on those sections of the constitution that speak about the rights of the people. This is a controversial strategy given that this document privileges clerical sovereignty over popular sovereignty. In this sense there is a clear difference with the protest movements in Tunisia and Egypt who have been calling for comprehensive “regime change” and a rewriting of the constitution.

Supporters of the opposition in Iran, including I suspect the Green Movement leadership, all desire a similar transformation in the structure of power in Iran, but the question is one of strategy and timing. The nature of authoritarianism in Iran and the question of the legitimacy of the existing regime is qualitatively different than in Tunisia and Egypt – thus necessitating a different strategy by the pro-democracy Green Movement. Officially, the leadership has been calling for freedom for political prisoners, freedom for political parties, a free press and free and fair election. It has been recently updated with an emphasis on the rights of women, workers and minorities.

Is religion part of the problem or part of the solution when it comes to the prospects of democratic reform in Iran?

Nader Hashemi: It is both part of the problem and part of the solution. The question really is which form, type and interpretation of religion are we talking about – the religion of Iran’s ruling oligarchy or the religion of Iran’s Green Movement? This point speaks to a fundamental social and political fact about the nature of religion – it can manifest itself in multiple ways, both against democracy and in support of it. I think John Locke and Alexis de Tocqueville would agree with this view.

And consider the case of the Grand Ayatollah Hossein Ali Montazeri (1922–2009, the ed.) who has been referred to as the moral conscience of the Green Movement. He was Khomeini’s disciple and designated successor who was removed from power and placed under house arrest because of his emerging democratic interpretation of Islam. It is precisely these types of individuals, those with impeccable religious credentials that pose a huge a huge threat to the Islamic Republic of Iran.

Secular politicians and activists can be more easily dismissed but not people who are pious and practicing Muslims. In societies where religion is a marker of identity, it is foolish to think that you can ignore the topic.

The current Iranian regime certainly has not done much to promote women’s causes – quite the contrary. Yet in Iran, many of those people that are socially and artistically active – are women, i.e. Shirin Ebadi, Rakhshan Bani-Etemad or Tahmine Milani. Also, already five years ago, the number of women at university in Iran has overtaken the number of men. How do you explain this phenomenon?

Nader Hashemi: This phenomenon can be explained by the unintended consequences of the 1979 Islamic Revolution in Iran. The Islamic Republic, in contrast to the Shah’s regime, invested heavily in literacy campaigns and basic education for the poor. This gradually led to an increase in literacy levels for women, higher university enrolment rates for female students, and a burgeoning feminist movement. Looking back, we can see that these policies have come to haunt the Iranian regime as educated Iranian women, particularly female students at the university level constitute a key pillar of support for the Green Movement. They will not accept second-class citizenship or laws that smack of gender apartheid. They demand full equality. Period.

I would like to point out that many of these women are both feminists and practicing and pious Muslims. Over time they have developed a feminist interpretation of Islam that reconciles tradition with modernity, deconstructs patriarchy and affirms both gender equality and a modern Islamic identity. Zahra Rahnavard, who happens to be the wife of the Green Movement leader Mir Hossein Mousavi, is a university professor, a scholar, a feminist, an artist and a chador-wearing Muslim woman. And there are millions of Islamic feminists like Zahra Rahnavard in Iran today and this sociological reality will eventually lead to the democratization of Iran.

In your book on the Green Movement, the toppling of the Mossadegh government in 1953 features as one of the defining moments of Iranian modern history. Why does this event have such a prominent meaning, how does it influence today’s politics?

Nader Hashemi: This event was not an isolated event but it fits into a larger and longer pattern of Western encroachment in Iranian affairs that goes back to the beginning of the 19th century. Also, it could not have happened were it not for the critical role played by the USA and, to a lesser extent, Britain. The affair halted a democratic period that had lasted a decade and was marked by the installations of a brutal dictator on the throne. He was sustained and support by the West for a quarter of a century, despite his unpopularity, political repression and corruption. In recalling this episode it is revealing to ask: how different might Iran be today if Mossadeq had not been toppled?

The deleterious effects this event has had on contemporary Iran politics cannot be overstated. Iran’s political culture is now hyper-sensitive to any form or even hint at foreign involvement in Iran’s domestic affairs. The Iranian regime today exploits this facet of Iranian political culture to maximum benefit. For example, all of its critics, especially those in the Green Movement, are charged with collusion and complicity with foreign powers. Despite the absurdity of this accusation, some segments of Iranian society buy into this claim and as it seems plausible to some given Iran’s modern and very negative historical experience with external powers.

Moreover, it has led to the development of conspiracy theories which have corroded and corrupted Iranian politics. While these conspiracy theories seem totally bizarre from our perspective in the West, they are very real to those whose lives have been deeply shaped and affected as a result of the sinister machinations of foreign powers in Iran’s domestic affairs. In short, the overthrow of Mossadeq deeply scared and affected Iran’s political culture in ways that we are still dealing with.

Today’s Iran is considered a pariah state by many. What makes you optimistic for the country’s future nevertheless?

Nader Hashemi: I’m optimistic for many reasons. First, the general social science pre-conditions for democracy look very good in Iran. There is a sizeable middle class, high literacy rates, a political culture that is sophisticated and democratically-oriented and there exists a civil society that, while currently repressed, has demonstrated in the past that when it is free from state repression it can be very vibrant. Similarly, the recent Arab democratic rebellions create a regional context which is supportive of democratization.

Also, one needs to view the regime and society separately. After the stolen election in 2009, the regime has lost considerable credibility and legitimacy – although it still retains some ideological support that is not very wide but it is deep. The Iranian regime is extremely fearful of its own society, particularly the young, the educated and those politicized segments like university students, intellectuals, women’s groups, workers and artists.

As I have written in the introduction to our book on the Green Movement, the “battle of ideas” is over in Iran. Liberal and democratic ideas have triumphed within civil society and the regime knows this. The model that people aspire to is not North Korea, Burma or Sudan but the free and democratic societies of the West where democracy prevails and human rights are protected.

Finally, let us not forget that most of Iranian society today is comprised of young people. They are highly educated, globalized, and most notably, unlike their parent’s generation – they are non-ideological. What I mean by this is they are not interested in towing a party or propaganda line and, broadly speaking, they desire great personal and political freedom, support political pluralism, nonviolent social change and human rights. Most young people in Iran do not buy into the regime’s propaganda. For how long can the Islamic Republic rule and seek to manipulate a recalcitrant population by telling lies, exaggerating threats and manufacturing crises?

Finally, let us not forget that now, for the first time since the 1979 Revolution, we now have an organically connected internal opposition movement that is pushing for genuine democratization and challenging established power inside Iran. The Green Movement has a leadership that is fearless, brave and incorruptible, it has its own martyrs, symbols, political program and intellectuals. While it is still a work in progress, the very fact that its exists gives me hope that it will eventually triumph.