Religions and their Coins 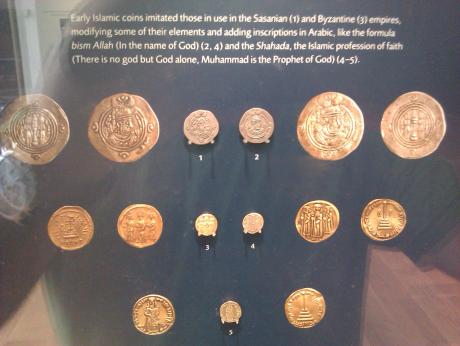 The Achaemenid ‘Persian Royal Road’ and, the ‘Silk Road’[1] were some of the ways in which knowledge and trade travelled in both directions between East and West. The spread of religious memes and technology in the ancient the world did not stop at the national borders or at the Hellespont.

The papers and material in ‘Mithras Reader Vol 3: An Academic and Religious Journal of Greek, Roman and Persian Studies’ [2] provide numerous examples of the knowledge different cultures had of each other in the ancient world, and, their potential influences on each other as the result. To add my own example to the list of East-West influences on each other, in this blog I would like to bring the readers’ attention to the fact that some early Islamic coins imitated those used in Persian Sassanian (Zoroastrian) and Byzantine (Christian), empires. Some Islamic coins still showed the Zoroastrian fire altar on one side and head of the Sassanian king on the other, but had Arabic text from the Quran added to them, see photo (these examples are from Ashmolean Museum).

The silver coin number 1 was struck in Iran during the reign of Sassanian emperor Khusrau III (619AD). The silver coin in number 2 was minted in Iran under Muslim rule (670s AD), the ‘bism Allah’ was added to the Sassanian model which had the Zoroastrian king and fire altar. The same was repeated with Christian coins, coin number 3 is Byzantine, Emperor Herclius (610-641AD) showing the Cross. After arrival of Islam in Byzantine (691AD), coin number 4 shows ‘bism Allah’ was added to the Byzantine coins.

The reverse of this process can be seen in the gold coin of Offa, the King of Mercia in England (757 -July 796)[3] who copied Islamic coins. The coin shows ‘Offa Rex’ on one side and an Islamic text from the Quran on the other, the coin is similar to an Islamic Abbasid period dinar coin.

The old trade routes allowed the flow of goods and knowledge for hundreds of years, and, coins were the universal language spoken by all, be they Zoroastrian, Christian, Moslem, Buddhist or any other faith.