All Atheists Are Muslims 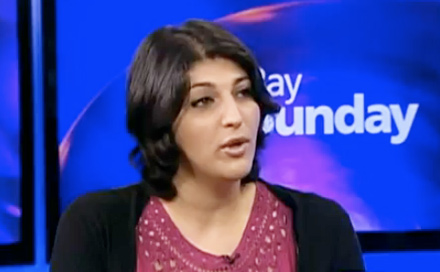 A few years, before Zahra Noorbakhsh moved to the New York stage, her grandma didn’t want to shake hands with me. At the time, Zahra was an undergrad literature major at Berkeley and may have thought it was about time her conservative Muslim grandmother met her real-life friends. After so many years in the U.S., I had forgotten that when you greet a chadored Iranian woman of grandma’s generation, proper etiquette is to look down at your feet as you say your salaam. Then if it turns out she’s not ultra-conservative, she’ll let you know. I’m just glad I didn’t’ try to hug grandma because she reminded me so much of my late aunt Mehri. That one glimpse of Zahra’s family life was enough to let me know that someday she will be an author, playwright, poet or actor. Her sense of humor, penchant for drama, and poetic temperament would not be able to resist turning the ironies in the life of a second generation Iranian-American’s into art. Soon after that mehmooni with grandma, Noorbaksh changed her major to theatre.

Noorbakhsh’s show at the New York International Fringe Theater Festival is called All Atheists Are Muslims and will be playing through August 23, 2011. The one-woman play, written by Noorbakhsh and directed by W. Kamau Bell, is about a young Muslim woman stressing about introducing her Atheist-American boyfriend to the family. Well… it’s not as simple as that. She’s planning to live with the guy outside of marriage. The “groom,” Duncan, is a UPS driver with a degree in literature. He likes lamb. Her parents are so flustered they fight over which of them has the right to throw Zahra out of the house– the mom who carried her for nine months or the dad who just “sat there and got fat.” Noorbakhsh channels all four characters in this solo performance.

When the show played in the San Francisco Area, it delighted both the audience and the critics:

“Noorbakhsh’s show seeks to skewer stereotypes as much as it elicits laughs from them.” – The San Francisco Chronicle

“Delightful! Funny, moving, and, above all… Universal.” – The Daily Californian

Noorbakhsh’s show has sold out every performance since its debut in Nov 2010. Now in New York, with just a two week run, the show has received critical acclaim from the New Yorker, which called it a highlight of the festival, as well as Newsday, making her the #2 pick of the Festival, and Time Out NY which put it on their list of the thirty-must-see shows. She has three shows left in New York, closing Aug 23rd. Surprisingly, Zahra says she isn’t seeing many Iranian faces in her sold out shows. So please hurry to see the show; it would make Zahra’s grandma proud. In fact, it would make all Iranians proud to see such a well received Iranian artist on a New York stage.

If you live in the San Francisco Bay Area, All Atheists Are Muslims will be coming back to San Francisco September 1- October 1 2011.

Above is a video