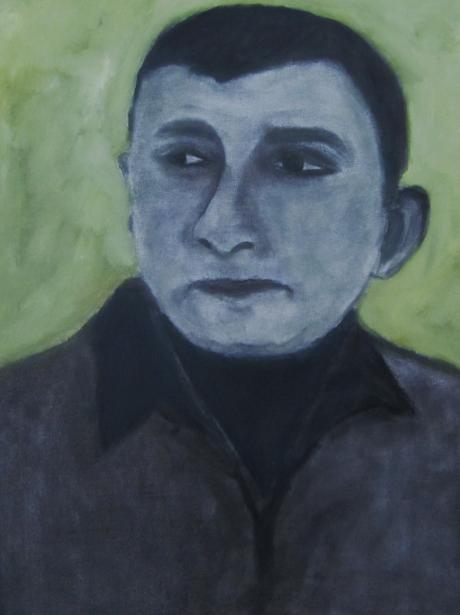 When I look back at my childhood, I see a barefoot kid running after a ball. My main pastime, just like every other boy in our neighborhood, was to chase a striped plastic ball we’d all chipped in to buy for 8 Rials. That’s all we needed to have fun. Our street was full of players of all ages, starting with little ones like myself to those with faces blanketed in mustaches and beards. We all shared the same passion.

At the beginning of each game, we had to go through a painful selection process for two teams. This squabbling started with a half-hour exchange of the most shameless words in our vocabulary and ended by throwing a few punches and kicks! After this daily ritual, non-players would become ticked-off spectators. They sat on the sidewalks, by the two endlessly parallel gutters filled with black slime that marked our street like every other one in our southern city. I heard in fairy tales the princess is awaken in the morning by the tantalizing aroma of flowers and perhaps those stinking channels were built just to provide the same service to us!

We played football in the God’s oven. At noontime, the asphalt melted into black chewed gum and stuck to the sole of our bare feet. Not only we endured the scorching playground but we risked our lives by dodging passing cars. Every few minutes the screeching sound of car brakes reminded us it was time to run. Another driver must have hit the brakes to avoid an involuntary slaughter. Then, the furious driver darted out of his car and chased the same kid who’d just avoided killing. Only God could save the poor kid if the driver caught him. This activity pretty much sums up the fun I had in the first nine years of my life on the streets until we moved to Tehran, the capitol.

Our new house was located in a quiet upper-middle class neighborhood, no filthy gutters and no fighting kids. The name of our street was kindness. All I saw was courteous neighbors saying hello to one another. Every morning, I woke to a clean street with no beggars, no gypsy women selling kitchen gadgets, and no kids wandering around knocking on the doors looking for playmates. I knew then I could not adjust to that sterile environment; the new neighborhood was to make some adjustments to accommodate me.

“We are now living among educated and cultured people,” my father reminded me while twisting my ear, “children here must have their parents’ permission to go out and must return home before dark. It’s called discipline,” he continued.

Discipline, culture and permission were fancy words I had difficulty to understand yet I had a hunch they meant no football.

In all fairness, our new neighborhood had some advantages. I could play with girls without their parents starting bloodshed and to avoid losing our family respect, my mother didn’t let me go out without shoes anymore. And due to that change of my lifestyle at age ten, I realized the soles of my feet were not created black. Gradually, I acclimated myself with the new milieu. I was also fascinated by the greeting rituals of the cultured people in our new environment.

My investigation revealed that almost every house in the neighborhood contained some kids. It took a few months but I managed to gradually lure them out of their nests in the afternoons to play football. By the next summer, we had eight to ten dedicated players every afternoon.

The generated noise however, disturbed the peaceful afternoon naps of all neighbors. Our games troubled an army colonel, a retired judge, an ayatollah, a Persian rug merchant and our own next-door Jewish neighbor. And more than anyone else we bothered Mr. Biok, a high-ranking oil company executive who lived at the end of the alley, a well-dressed and respectable man by all accounts. I was amazed by the ironed creases of his pants; I swear he could cut a watermelon with those sharp edges. Mr. Biok was also my greeting target practice, for whom I recited a series of “hello”, “good morning”, “good afternoon” and “what a nice day?” all in one sentence regardless of time of the day or the weather condition.

Ticked off neighbors at one time or the other spoke to my parents and expressed their outrage with the ongoing chaos and my name was sprinkled on their conversations. They held me personally responsible for ruining their children and shattering the serenity of their neighborhood. Mr. Biok had already identified the menace and never let his two beloved clean-cut sons come in contact with me. He had quarantined his impressionable children despite the fact I respectfully greeted him on the street on daily basis.

Playing football became more and more popular despite the widespread opposition of neighbors. As the kids became good friends, our parents became more adamant in opposition to our afternoon fun. Every time our ball was kicked into a neighbor’s house, it was thrown back ripped by a knife.

Most often our balls landed in the Mr. Biok’s yard. Unlike others however, he didn’t tear our footballs, he just didn’t return them. His house was rightfully called “the Ball Cemetery”. Kicking a ball into his yard meant end of the game and additional financial burden of purchasing a new one the next day. The cost was running high as the majority of the neighbors became ball-rippers and our tiny daily allowances were too small to afford a new ball everyday.

One day after another tragic loss, we all sat down with gloomy faces by the Ball Cemetery and grieved the loss of loved ones. We all realized this was not a sustainable situation. One of the older kids proposed a resolution.

“Why don’t we ask Mr. Biok to return our balls? He seems to be a reasonable man. He has never cut up our footballs. Why not asking him?” He reasoned.

To this day, I don’t know why I volunteered for this task. Maybe because of all those greetings I had given Mr. Biok. Maybe because I felt I could communicate with him and resolve our issues like two civilized individuals. At the age of eleven, I was convinced that Mr. Biok would understand our passion for the game and return our footballs, and maybe even let his sons play with us. I was determined to extend a hand of friendship to a neighbor so unknown and so distant to me.

With a self-confidence I didn’t know I had, I rang their doorbell not once but twice. A couple of minutes later, the door opened and I faced our kind and gentle neighbor Mr. Biok. I was eager to show how well adjusted I’d become and demonstrate my mastery of the art of salutation and proper communications.

“Hello Mr. Biok. Good afternoon. How are you today sir?”

Mr. Biok stared into my sweaty face and responded, “What do you want?”

“Sorry to disturb you sir, but is it possible for you to return our balls? The ones we have kicked into your yard by mistake? Of course, we are all sorry for your inconvenience, sir. I know it’s your nap time.”

His eyes sparkled, as he took a deep breath and politely responded, “Wait here.”

He went back inside leaving the door ajar. I glanced inside his yard and witnessed the most beautiful scene I had ever seen. All of our missing balls were neatly piled in an empty water basin in the center of the yard. The red ones, the yellow ones with blue stripes and the solid ones. And best of all, my own personal leather ball with the inner tube that my sister brought me from India. It was sitting there anxiously waiting for me to kick it around like Pele. God knows how many players I have dribbled with that ball on a tight corner spot the size of a handkerchief.

I was so mesmerized by the beauty of this sight and totally forgot Mr. Biok until suddenly I felt a draft like a fan blowing at me. For a second I thought our nice neighbor had brought me a running fan to cool me off after the game. Then I looked up only to face a beast with a long garden hose twirling over his head. He frantically stormed toward me, claiming my life in his sweet Turkish accent. I leaped like a scared rabbit and ran for my life and the other kids followed my lead. Mr. Biok could have struck slower kids and take his revenge but he was not satisfied by a simple retaliation. He was not interested in innocent victims. He wanted to shed my blood. He wanted to clean the entire neighborhood by eradicating the root cause.

My only chance of survival was to reach our house in the middle of the alley but the faster I ran, the longer our street became and the farther our house appeared to be. Mr. Biok and the twirling garden hose over his head looked liked a roaring helicopter closing in on me. I could feel the lethal touches of it’s blades on my back and thinking why me? Why should I always be the one who pays? My short life flashed before my eyes as fast as I was running from my immediate death.

As the tentacles of the demon were to touch my back, I began to fear what if our house door was shot. And when I reached our house, it was, so I coiled my body into a cannon ball and smashed myself into the locked door desperately hoping that there was a God and he had mercy on my soul. The door miraculously flung open and I was thrown inside.

The raging monster stopped at our door as the neighbors converged on him and finally convinced him that killing a kid, even it was me would not eliminate the love of football. The beast calmed down and transformed into Mr. Biok again.

After this horrific event, no one dared to show up in the alley for a few weeks and the entire neighborhood plunged into an eerie silence. And one gloomy afternoon, as we all lounged outside our homes a beautiful rainbow of colorful balls showered our neighborhood from the last house of the dead end alley.
[Original in Persian]