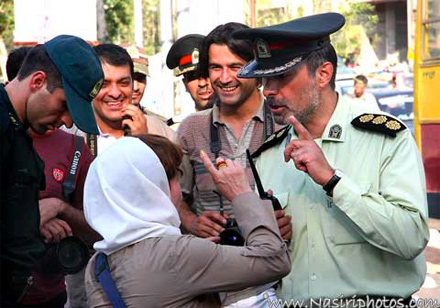 The infrastructure of Iranian society is based upon its women’s sacrifice pertaining to the social class they belong. As a woman in the elite, above average middle class, you must sacrifice your passionate love in order to marry the repulsive business man, doctor, attorney, or the affluent young man of which your family approves. You have to sacrifice your soul to continue living with someone with whom you feel no connection, to keep your family happy. You sacrifice your youth days to stay with a man you do not love, nevertheless, you do it to raise your children, the ultimate entrapment skill exercised by your husband. You sacrifice your middle-age life to raise your grandchildren, to keep your children happy.

As you age and you are not as vibrant and beautiful as in your earlier days, you will tolerate the presence of a second or third or fourth wife to keep your family together. You become a maid called “mother” to take care of the house and serve your guests to save face. In your later years, you feel compelled to sacrifice and take care of your husband to have his blessing. Fantasizing is your only refuge in that populous solitude. Upon leaving this world, your name will not even be on the obituary [1]; that is the ultimate sacrifice of an Iranian woman, an emblem of torment, a deranged meaning of suffering in the eyes of a Western woman.

In a different version of the foregoing, your husband may pass away in his young age and you will become the head of the household. You will have to begin a ceaseless battle with single and married men surrounding you, waiting for you to slip and take advantage of you. Although you are educated, you have no skills to hold a job to pay for your expenses. You are alone, with no support, respect, or help. Thus, we embark on learning about the many hurdles an Iranian woman will have to face through her lifetime if she belongs to the upper middle class.

The ugly side of this coin represents the lower middle class looked after by a patriarchal figure with the right to marry four wives and have unlimited “temporary” marriages [2]. While the foregoing challenges accurately describe what the woman of this class would have to swallow to survive, it fails to demonstrate how the treacherous economic conditions within the family could force her into a kind of “prostitution” or insanity at best.

Much is not known about the strenuous life of an ordinary Iranian woman, as they have always been too proud to disclose their agony. Their threshold for pain is monumental; hence, they maintain composure and put on their best face, as much as they are allowed to expose with the head cover.

Throughout the past thirty-two years, since the take over of the country by Islamic Fundamentalists, Iranian women have been fighting vigorously to disobey all social, civil and legal restrictions that contribute to this facade of unwholesome harmony.

Since the establishment of the Islamic Regime in Iran and a harsh enforcement of “Sharia Law” on the society, women have been the target of colossal inequity. The women of Iran differ from their counterparts in the Middle East; they defy boundaries. While the Parliament of Iran has been the instrument of granting a landslide of sweeping civil, legal, and family rights to men [3], women have been going door to door to fight for their rights.[4]

Although there appears to be no specific ideological leadership among women, we can certainly draw a significant line between two leading groups of female activists in Iran. The first group are liberal Moslems who still believe in religion playing a role in government, yet they would like to implement a different interpretation of the Qu’ranic verses wherein “transitory” instructions are filed in the back drawer to be used for college textbooks and wherein equal rights have to be exercised per the “universal” aspects of Islam. This doctrine will have to weather battles of time and various governments to prove ineffective in order for feminists Muslims to change course. These activists have become well versed in all religious texts [5] to arbitrate their legal rights by means of the same texts that have barred them from engaging in such activism.

This movement to create a more “reformed” Islam resembles the challenges Christianity faced to adhere to certain social reforms within the religion during its long history, however, Islam differs from Christianity in that the instructions of Islam dictate the manner in which you live your day-to-day life, from the moment you use the bathroom, sleep with your wife, shower, marry, die, and finally are put in your grave. A government with that type of authority will be autocratic, to say the least; we have not seen the earthly model of such a government with justice for all. Nevertheless, this group of women with their allies, the secular activists, have been aggressively pursuing equal rights for women in today’s Iran. Their most recent victory is to put discriminatory marriage legislation on hold [6], although, their leaders were charged and imprisoned the same week.

The second group are secular activists who believe that religion is an individual matter and should not play any part in government. They seek gender equality [7] to grant rights of custody of children, marriage, divorce, inheritance and laws in regard to testifying as a witness in a court of law. Both of these two groups face many challenges.

As the world observed during the 2009 post-election uprising, the women of Iran were in the front lines; if you have nothing else to lose, you will fight with your life in the palm of your hands. As such, the government is tightening its regulations against them on a broad scale.

The government of Mr. Ahmadinejad implemented many laws to restrict women from holding high political office positions. International sanctions initiated by the United States has had a devastating effect on the job market for women as well. The United States is extremely concerned about Iran’s nuclear enrichment program, hence imposing many sanctions in actuality affects lower middle class blue collar families versus the affluent who rarely have to worry about their finances. It is easy to understand why our government opposed Iran’s bid on the United Nations Organization for Gender Equality around the world while we did not have much to say about the seat that was given to Saudi Arabia despite its restrictions on women’s rights. As such, women’s rights are not on our agenda, so the United States can turn a blind eye when it is not in our best interests to argue this issue internationally.

In 2010, more than sixty-five percent of university students in Iran were female. Iranian women defied the compulsory hijab [8]. Every year, the government spends large amounts of money in order to locate and detain women in the streets of Tehran. If you walked the streets of Tehran, you could see fashionable women wearing long tunics, skin tight, skinny jeans, stylish hair underneath the scarf, brand name sunglasses, expensive perfumes carried by Saks Fifth Avenue, full make up, manicured nails, and high heels.

Iranian women were fighting for basic rights such as being able to watch a soccer game next to their husband, boyfriend, or father. They took their fight to the internet and created many blogs and Facebook pages wherein they are connected to many other women activists groups in different parts of the world.

The hard-liners felt threatened. They began arresting women activists, cracking down on the ones who improvise on the Islamic dress code. Every year, especially in Ramadan [9], the morality and fashion police [10] take over the streets of Tehran, detain women, ticket them, beat them up, and after a few weeks, they go back to their stations .

However, this summer, the police are not leaving. They are permanently stationed in the streets of Tehran. Women are harassed, beaten up, punched, kicked, dragged in the street, and taken to different precincts to receive monetary fines, or flogging and jail time [11]; if their families do not find them swiftly, they will be taken to underground detention centers to be raped and brutalized.

After the abolition of certain marxist-socialist groups, the women’s movement of Iran has been the most vibrant movement in the country. They are the new political and social opposition to the current establishment. They penetrated the workplace, universities, and political arena while the Regime was spending its time and money to rid the country of other political opponents.

This era is the most brutal part of Iranian history;the victims are Iranian women who are being persecuted in public places, beaten, and arrested. Persian newspapers and bloggers report of a martial law in Tehran. The fashion police and military are stationed at major intersections with their machine guns creating terror among women. A government official of Ahmadinejad’s administration is advocating a ban on all female patrons in tea and coffee houses.

The Islamic Regime has lost its bridle and is savagely tyrannizing women along with other young members of the society. Every day life has turned into an immense burden, even driving is unsafe for women as the presence of these military forces distract you; should you watch out for them or cover your wrists and ankles and hair? [12]

University officials have been ordered to change their admission quota to increase the number of male applicants, effectively placing women at a disadvantage. What is more, as a woman in Iran, if you do not have a higher education degree, you will have to be dependent on a man for your income. Highly educated women are being forced to leave their key government positions and are being demoted to meager positions in personnel or filing departments. [13]

These are not good times to be a woman and live in Iran. The hidden hero of the infrastructure of the Iranian society briefly emerged to accomplish unimaginable tasks they dreamed of while under wraps. Alas, they are forced to disappear day after day into the seclusion of their cars, then houses, and lastly, buried under the very same shroud they felt so bitter about for decades. “It is Hell Over Here.” [14]

1. Since the establishment of the Islamic Regime, in many parts of Iran, it is not customary to print female names in obituaries.

2. Men marry temporarily, usually for a period of between 24 hours and up to about 3 months, wherein women are basically used as prostitutes. They have no rights to alimony, et cetera.

3. The Family Protection Act of 1967-75, which had given women rights in marriage and divorce, was repealed, and women were demoted or barred from certain professions deemed unsuitable.

4. The one million signature campaign launched by Iranian women to change the discriminatory laws under the Constitution.

8. Hijab is the Islamic cover enforced in Iran by the morality police. Women who are flaunting their wrists and ankles are considered to have committed an indecent “sexual” act and they can be fined, as well as sent to jail and flogged.

9. Ramadan is the Holy month of fasting for Muslims of the world.

10. The morality and fashion police are government militia to enforce strict Islamic rulings.

11. This is a Persian publication.

14. “It’s Hell Over Here” is a poem by contemporary poet Jahan Azad representing the current situation in Iran.