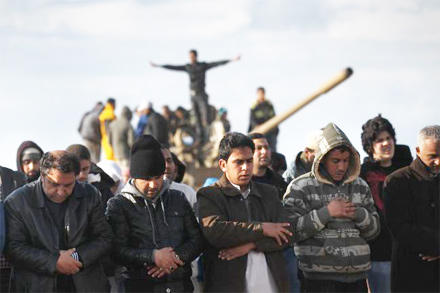 When future generations look back, they will remember 2011 as the year of the end of dictators in the Middle East and the Maghreb. Libya’s Muammar Qaddafi appears to have now joined the Middle East parade of despots rejected by an uprising. Practically nine months after Tunisia’s President Zine al-Abidine Ben Ali was ousted after 23 years of authoritarian rule and the Egyptian President Hosni Mubarak was thrown out of power by a few weeks of protests in Tahrir Square, Qaddafi is at the end of his reign after 42 years of dictatorship.

The year, 2011, could indeed be considered the starting point of a paradigm shift in the Middle East that will bring the downfall of the remaining despots in the region while restructuring the way energy resources are priced and supplied around the globe.

However positive regime change may be in the longer term, the short-term social and political consequences are likely to be quite challenging. It goes without saying that the overthrow of dictatorial regimes in the Maghreb and the Middle East will have proven easy compared to the difficult and uncertain establishment of secular and democratic governments.

So far, the remaining authoritarian regimes in the region such as Iran and Syria have sought to insulate themselves from an Egypt-like scenario. They continue to practice a high degree of violence against their opposition, believing they can hold onto power as long as they succeed in terrorizing their citizens.

As we’ve seen in recent months, that tried-and-true strategy that has worked for decades no longer does. Yet, since they have no other option, these regimes nonetheless brutally pursue it.

Mr. Qaddafi, Mr. Mubarak, Mr. Ben Ali, Syria’s Bashar al-Assad, and those like them have long professed to be the beloved leaders of their people while holding their people by their throats. They have all shared two characteristics: the use of extreme violence against dissidents and protesters and unfulfilled promises. However, if there is one thing history teaches us, especially of late, it is that there is a limit to sheer brutality practiced by a despot against his people. In the end, a dictator cannot jail, execute, or exile such an enormous number of his people while also inspiring loyalty.

Now that the challenge to Qaddafi’s regime is coming to an end with a violent uprising that forced a long-ruling autocrat out of power, all other dictators in the region will certainly undertake their own risk assessments and try to adopt strategies to reduce their vulnerability to a similar scenario.

It remains to be seen whether Mr. Assad and Iran’s Revolutionary Guards can manage to continue terrorizing their fellow citizens extensively enough to win a chance of dying in their own bed. Leaving aside wishful thinking, what is certain is that the Syrian and Iranian regimes, even though they have lost their moral and political legitimacy, are doubling their efforts to crush and fragment civic actors precisely in order not to end up like Egypt or, now, Libya.In doing so, they have created enormous obstacles to the nonviolent transition in these countries.

Nonetheless, ending the reign of terror in Syria and Iran is not totally blocked if the formerly cowed citizenry takes up their own collective responsibility, as they did in Libya, to end human rights abuses. However painful it might be to admit, the time is long past for “dictator containment” by an international community that seeks to guide leadership succession and create a space for moderate autocrats.

Democracy promotion from outside is simply not practical or effective as long as the people are not willing to band together and, at the risks and costs to their own lives, to shake off the fear and depose their dictators. As Machiavelli said, “Men are driven by two principal impulses, either by love or by fear.”

Dictators like Qaddafi, who had long professed to love his people while cultivating an image of himself as a father figure feared by his children, have proved to be fooling only themselves. The truth is that at the end, dictators are neither loved nor feared. Sooner, if not later, that same truth will visit Syria and Iran.

AUTHOR
Ramin Jahanbegloo is Associate Professor in Political Science and Research Fellow at Centre for Ethics at University of Toronto >>> jahanbegloo.com