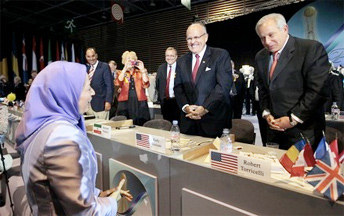 The extraordinary lobbying campaign on behalf of the sometime Marxist/Islamist cult/terrorist group known as the Mujahedin-e Khalq is getting waged on ever more fronts. The specific objective is to get the Obama administration to remove the MEK from the list of foreign terrorist organizations. Wherever the money to fund the campaign is coming from, some of the largest expenditures so far have been in the form of fat speaking fees to notables who are willing to accept the check and come out in favor of delisting the group. Some of these high-profile hired advocates later acknowledged they did not have all that much knowledge about the MEK.

Having purchased advocacy at the high end, the organizers of the campaign are now buying it at the low end. For a demonstration outside the State Department on Friday, demonstrators who, it is probably fair to say, know even less about the MEK than the big-name speakers were bussed in from as far as New York City. Many demonstrators were provided not only the transportation but also in some cases lodging and meals. One of the participants, a 23-year-old homeless man from Staten Island named Melvin Santiago, said he learned about the demonstration from a friend who in turn got word of it through a flyer distributed in front of a church—where the friend, said Santiago, “usually goes for the food pantry.”

Those who have sold their advocacy for big bucks deserve shame; those who have done so for a meal or two maybe deserve our pity. Those who have gotten mixed up in the campaign through a crude belief that Iran is an enemy and the enemy of my enemy is my friend need to realize that being an enemy’s enemy does not make one a friend. Those who have some notion that the MEK can serve as a force for opposing authoritarianism in Iran are badly mistaken about the nature of the group—a good description of which is in a recent piece by Elizabeth Rubin in the New York Times. The most telling comments about the MEK are from leaders of the Green Movement in Iran, who point out that any rehabilitation of the MEK—which has almost no popular support within Iran, especially ever since it functioned as an arm of Saddam Hussein’s security forces—would only serve to discredit pro-democracy forces in Iran.

Even setting all that aside, there is an important procedural issue involved. On this issue alone, the pro-MEK campaign is objectionable. The decision of the secretary of state that the campaign is attempting to influence is not some subjective act of crafting policy. It is supposed to be a straightforward application of the terms of the Antiterrorism and Effective Death Penalty Act of 1996, which created the formal list of foreign terrorist organizations (creation of such a list having been necessitated by other provisions in the act, such as the criminalization of material support to terrorist groups). The procedure for listing or recertifying FTOs, as they are called, involves not only the State Department but also the Justice Department and the intelligence community. It is a long legal and administrative procedure, as I can testify from having been involved in the creation of the initial list of FTOs after passage of the 1996 law. The criteria to be applied involve such things as involvement in terrorist activity and effects on U.S. interests (which is not to be equated with terrorist attacks being directed against U.S. targets). Having conducted an anti-U.S. terrorist attack recently is not one of the criteria; if it were, many current FTOs—such as Lebanese Hizballah—would not be on the list.

Abbas Milani, in an otherwise informative piece [5] in these spaces about the MEK, unfortunately suggests an equivalence between the well-funded pro-MEK campaign and statements that have been critical of the campaign and the group. Milani even talks about Iranian regime funding of anti-MEK lobbyists. (That last point is a little puzzling. The regime assuredly hates the MEK as much as most Iranians do and, if the group were delisted, would get plenty of mileage from loudly proclaiming that this action shows how phony is any U.S. affirmation of supporting democracy in Iran. But precisely for that reason, and because of how the action would help to discredit the democratic opposition in Iran, the more strategically minded hardliners in the regime probably would quietly welcome delisting.) Whatever the Iranian regime may be doing, the statements critical of the pro-MEK campaign that I am familiar with (and have participated in myself) have nothing to do with the regime, and they are not an attempt to lobby the secretary of state. Instead, they are a calling to account of the large and illegitimate campaign that is trying to pressure the secretary. The calling to account would not be necessary if the pro-MEK campaign were not being waged. The MEK has been recertified as an FTO several times in the past with no noise about it in the street, on speakers’ platforms or in opinion columns.

The secretary of state should pay no heed to what Melvin Santiago and the other hungry homeless outside her office window are saying, or to what the high-paid hired guns are saying, about the MEK. Nor does she need to pay any attention to what people like me are saying about the group. She should keep the windows closed and just pay attention to the terms of the law and to what officials in the departments and agencies involved say about whether the terms of the law still apply in this case.

AUTHOR
Paul R. Pillar is director of graduate studies at Georgetown University’s Security Studies Program and a former national intelligence officer for the Near East and South Asia.  He is a contributing editor to The National Interest where he writes a daily blog.