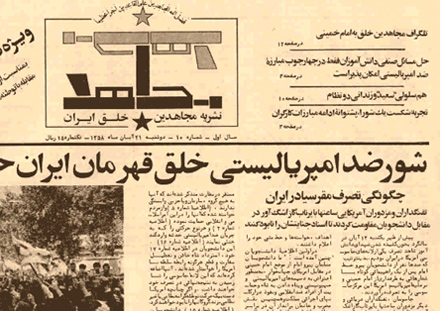 If the ultimate goal of delisting the MEK is to create a political entity with military capacity that could come into play when push comes to shove with Iran, then we’re in for yet another foreign policy disaster.

If anything, the whole 9/11 ordeal revealed in a spectacular way that enhancing an extremist organization and tactically allying with it in order to gain strategic advantage over a bigger foe is not necessarily the best long-term policy. Terrorist groups and indoctrinated cults (regardless of how they’re designated) don’t make loyal friends. That’s now a historically proven fact. You could use them for short-term gains –just as you did with Afghanistan’s Mujahidin in early 1980s against the Soviet Union – but once they grow strong, they’ll go by their own twisted agenda.

Certainly, an unethical dogmatic cult like the MEK – which has the capacity of instructing its own members to self-immolate in support of their leaders – a cult that went as far as fighting alongside the troops of Saddam Hussein when he invaded its own country’s territorial integrity – is much less principled and predictable than some hawkish American politicians wish it to be. You may see a potential ally in the fiery group for the time being, but it’s utterly naïve to think that an ideological political formation that took up arms against its own people at a time of war would stay loyal to anyone or to any noble principle it pledges to uphold.

The truth is that enhancing the MEK from a ghostly Marxist-Islamist terrorist organization on the verge of dissolution to a dangerously consequential actor in the inflammable region of the Middle East would most likely be a risky decision that future U.S governments, along with moderate political and ideological forces in the region, will wholeheartedly regret. If left alone, the MEK would probably gradually fade away in the maze of history and spare future generations the hassle of combatting yet another fanatical force. If boosted and unleashed however, there would be no guarantee that anyone – including the U.S – would be able to exercise any sort of moderating influence on it. The risk is for Hilary Clinton to take. She could play it safe, call the terrorist group what it is and contain it until it’s dissolved. Or she could boost it up, let it loose and watch it in action.

The Secretary of State should bear in mind though that in its present miserable form, the MEK is one of the staunchest forces against peace and non-violent resistance among all other Iranian political groups. Not yet delisted, the MEK is perhaps devoting as much time and resource combatting and weakening the voices of non-violence within the Iranian opposition– such as the indigenous Green movement – as it is “fighting” the Iranian regime. It suffices to take a quick look at the MEK’s online media, TV programs and propaganda machine to see the level of hatred and resentment that this group spurs toward the very notion of “non-violence” and civility in political struggle (although the English version of its media productions aimed at a Western audience are much more “peaceful” than its Farsi ones).

So there should be no doubt in her mind that if the MEK’s capabilities and credibility are enhanced through recognition by the State Department, it would not hesitate to unleash all its newly gained impetus to suffocate all voices of rationality and plant the seeds of a new form of extremism that future generations of Iranians, Middle Easterns and Americans would have to deal with.

It is a pity to see that at a time where the Arab spring is promising a new era of rationality and prosperity in the tormented region of the Middle East, some forces within the U.S are yet again paving the ground for another round of violence to emerge.