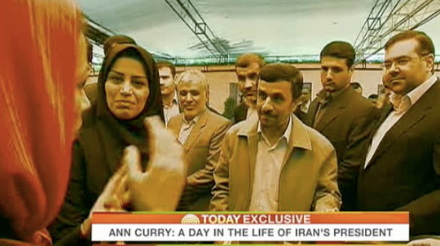 Iranian President Mahmoud Ahmadinejad prays every morning at 5 a.m., then goes jogging with his bodyguards “at times seemingly ‘Rocky’-style.”

He then heads to the gym. The early bird Iranian president works out for 30 minutes every day before reaching his “spacious but simple office” before 7 a.m.

What follows in his daily schedule includes reading the newspapers, meetings, talking with and caring for poor people, and more prayers.

Ahmadinejad is a pious superman who doesn’t rest; his aides claim he sleeps only three hours per night.

His days “often stretch to 2 a.m.” and “even during his flights [to one of Iran’s provinces] he’s meeting with ministers.”

Those were not excerpts from a report issued by the president’s own office, nor from a show that could have been aired on state television a while ago when Ahmadinejad was still the golden boy of the Islamic republic. (The president has become isolated in recent months as the result of a power struggle with Iran’s Supreme Leader Ayatollah Khamenei.)

The ,” Ahmadinejad is off to a good start in what appears to be a charm offensive ahead of his New York trip.