We Have a Few Questions 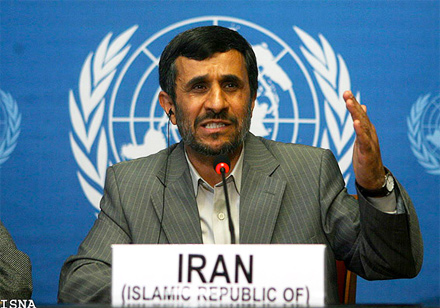 Member states of the United Nations as well as the international media should focus on the ongoing human rights crisis in Iran as Iranian President Mahmoud Ahmadinejad arrives in New York to attend the 66th session of the UN General Assembly.

International Campaign for Human Rights in Iran specifically calls on Ban Ki-Moon, the U.N. General Secretary, and all diplomatic representatives of member states who will meet Ahmadinejad during his visit, to express serious concerns about the grave human rights situation in Iran and to demand an immediate end to widespread violations of Iran’s international obligations and harsh repression of its citizens’ rights. In particular, the Campaign urged all international actors to call on Ahmadinejad to cooperate with the recently-appointed Special Rapporteur on the situation of human rights in Iran and immediately release Mir Hossein Mousavi and Mehdi Karroubi, two leading opposition leaders who have been under de facto house arrest without any judicial process for the past seven months.

“Ahmadinejad comes to town as an unprecedented human rights crisis grips the country. This is an important opportunity for diplomats, journalists and ordinary citizens to challenge him on Iran’s record of abuse and express their disapproval in the strongest possible terms,” said Hadi Ghaemi, the Campaign’s spokesperson.

The Campaign stressed that today in Iran freedom of assembly is all but non-existent, hundreds of people are illegally detained, freedom of expression is at its lowest point in years, torture and ill-treatment in prison are rampant, and rising numbers of executions have made Iran the world’s largest executioner on a per capita basis.

The Campaign welcomed the news of the probable release of the two American hikers, Joshua F. Fattal and Shane M. Bauer, on the eve of Ahmadinejad’s arrival, but pointed out that authorities have held them for more than two years without any substantive evidence supporting the espionage charges against them. Their detention and sudden release is seemingly another example of politically motivated arrests and prosecutions by the Iranian Judiciary and impunity for officials that bend Iranian laws and violate human rights.

“Ahmadinejad is trying to use the hikers’ release for political gains on the international stage. No one should be fooled,” said Ghaemi. “The question is why were these young men deprived of their liberty for so long on trumped up charges and without proper judicial proceedings? Moreover, why isn’t anyone held accountable for this injustice?”

“While Ahmadinejad and the Iranian regime feign magnanimous humanitarian intentions, hundreds of prisoners of conscience continue to languish inside Iranian prisons under alarming conditions,” added Ghaemi.

The Campaign estimates over 400 prisoners of conscience are detained in Iran, for such reasons as criticizing the government or government policies, taking part in peaceful protests and being active members of minority religions. Most recently, on 10 September, authorities arrested human rights lawyer and founding member of the Defenders of Human Rights Center Abdolfattah Soltani. Soltani’s wife, Massoumeh Dehghan, told the Campaign that security forces illegally broke into his offices and confiscated several of his personal and family documents. The Campaign previously published a list, compiled by Noble Peace Prize Laureate Shirin Ebadi, of 43 lawyers who have either been imprisoned or harassed since the June 2009 election.

Many detainees in Iran have reported that authorities have subjected them to torture, ill-treatment and months in solitary confinement, denied them adequate medical care, and housed them in cramped and unsanitary detention centers.

Ahmadinejad’s attendance at the U.N. calls into question Iran’s absolute lack of cooperation with international human rights mechanisms. In March 2011, the Human Rights Council in Geneva created a special mandate for a Special Rapporteur to monitor and report on the human rights situation in Iran.

Ahmed Shaheed, former Foreign Minister of the Maldives, has been appointed as the Special Rapporteur, but the Iranian regime has so far ignored his request for access to the country and refused to cooperate with his mandate. Since 2005, the Iranian government has denied access to several other U.N. thematic special experts who have requested to visit the country.

The Campaign urged all member states to explicitly call on Iran to immediately end its obstructive policies towards U.N. human rights mechanisms and fully cooperate with Shaheed’s mandate and allow him to conduct an official visit to the country.

During the past few months, the repressive policies of the Iranian regime, made more tense against the backdrop of popular uprisings in the region, have intensified. Security forces harshly put down recent demonstrations challenging environmental policies leading to the destruction of Lake Orumiyeh, arresting hundreds of peaceful demonstrators. Faranak Farid, a 50-year-old women’s rights activist detained in the northwestern city of Tabriz in connection with these protests on 3 September 2011, is reportedly suffering from torture and ill-treatment.

Despite the fact that Iranian security forces suppress protests, according to his official website, Ahmadinejad recently called for the Syrian government to implement reforms to address the grievances of Syrians. A Portuguese television station quoted him as saying, “A military solution [to Syria’s public protests] is never the right solution.” Ahmadinejad had also chastised the Mubarak and Qaddafi regimes in Egypt and Libya for their use of force against protestors earlier this year.

Yet in February of this year, Iranian authorities used excessive force to subdue demonstrations held in solidarity with the events of the Arab Spring. Ironically, Iranian authorities also violently put down massive peaceful protests demanding basic democratic and constitutional rights prompted by Ahmadinejad’s own disputed re-election in 2009.

The Campaign urged the media to question Ahmadinejad on his government’s intolerance of peaceful demonstrations at home while claiming to support protests across the region.

Iran continues to be haunted by a culture of impunity for serious human rights violations. In June 2011, two prominent dissidents, Haleh Sahabi and Hoda Saber, died from heart attacks after state agents attacked them in separate instances. Authorities failed to initiate any investigation, highlighting the impunity enjoyed by security and intelligence agents, as well as Judicial authorities, for torture and deaths of detainees and other Iranian citizens.

Iran’s accelerating implementation of capital punishment reached new heights in 2011. As of 6 September 2011, the Iranian regime has executed at least 402 individuals, only 241 of which were acknowledged by the authorities, while another 161 persons were hanged in secret and without any public acknowledgement. Most of these executions are for offenses that don’t meet international standards, including drug-related crimes, adultery, and, in one case still on death row, apostasy.

Ahmadinejad is scheduled to arrive in New York City on 15 September. During his past visits, in addition to taking part in the opening session of the United Nations General Assembly, Ahmadinejad has taken the opportunity to meet with international journalists and diplomats, dine with select groups of New Yorkers, and give public addresses.

“The Iranian regime is ramping up its repression as it sees dictatorial and authoritarian regimes all around falling apart and challenged by their restive populations. The international community should not tolerate this abhorrent repression of Iranian citizens, and should let Ahmadinejad know that they are not fooled by his prevarications and his theatrics,” Ghaemi said.

1. Does your government plan to allow the U.N. Special Rapporteur on the human rights situation in Iran, Dr. Ahmed Shaheed, to visit your country and investigate allegations of human rights violations?

2. Do you approve of the house arrest of your former election rivals, Mir Hossein Mousavi and Mehdi Karroubi? What is the basis for their confinement?

3. How do you respond to charges that high-ranking officials enjoy impunity for human rights abuses in Iran?

4. Do you feel you are in a place to criticize Arab governments in Egypt, Libya, Bahrain and even Syria for their response to public protest when your own government has used force to subdue peaceful protests on many occasions?

5. How is it that Iran has become the world’s leading practitioner of the death penalty with the highest per-capita executions?