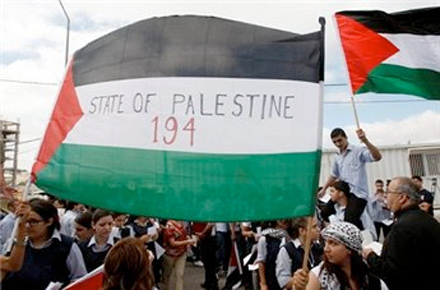 American, Israeli and Palestinian officials today are frantically grappling with the various pros and cons concerning the Palestinian Authority’s (PA) plans to seek recognition from the United Nations this week. Regardless of the merit or wisdom behind such a move, the Palestinians seem determined to proceed with their plans unless Israel agrees to negotiate in earnest while freezing settlement construction during the negotiations–an unlikely option at this late juncture. Unfortunately, neither side is willing or able to agree to rules of engagement to support their professed desire to conclude a peace agreement resulting in a two-state solution. The failure to reengage in negotiations before Abbas presents his resolution to the UN General Assembly (UNGA) or to modify any resolution passed by the UN to produce positive momentum will usher in a period of instability with unpredictable consequences for all parties: the United States, Israel and the Palestinians.

First, the clear consequences of the UN plan are reduced influence of the United States in the Middle East. The internationalization of the conflict serves as a de facto vote of no confidence in the Obama administration’s ability to bring the parties back to the negotiating table.

Second, Israel would face an unprecedented wave of continued delegitimization efforts. An increasing number of states, certainly more than two thirds of the international community, will join in solidarity with the Palestinians.

Finally, the test for the PA will be managing the strategy for the post-UNGA environment to meet the rising expectations that have come with the international push to recognize Palestine as a UN member state. The potential for renewed violence between Israelis and Palestinians could dramatically reverse the remarkable progress achieved in the West Bank.

Although both Israel and the Palestinians pretend to be weary of the unending conflict, they nevertheless pursue counterproductive policies, undermining the very premise on which a lasting peace could be erected. If Netanyahu truly sought a two-state solution and to prevent the Palestinians from going to the UN, he could have agreed to starting negotiations with borders and even accepted a temporary freeze on settlement construction to give Mahmoud Abbas a face-saving way out. The Palestinians, on the other hand, could have intimated to the Americans that they were willing to stop promoting old narratives, particularly about the return of Palestinian refugees, and agreed to a significant land swap thereby encouraging the Israelis to take them seriously.

In the past, I have opposed the Palestinian move to unilaterally seek UN recognition of their state, but at this late hour the only way to avoid what will be an unprecedented period of uncertainty is for the United States and the European Union to lead the way.

Rather than simply vetoing the proposed Palestinian resolution, the Obama administration should introduce a resolution that could garner the support of the UN Security Council (UNSC) with provisions that will inevitably have to be accepted by both Israel and the Palestinians. The US should join leading EU members like France, Britain and Germany who have and would certainly still consider proposing four parameters that any future Israeli-Palestinian negotiations will have to accomplish:

1) the future border to be established based on the 1967 borders with mutually agreed land swaps,

3) a shared capital in Jerusalem by institutionalizing what is on the ground without uprooting any Israeli or Palestinian residents and,

4) a just solution to the Palestinian refugee problem, which must be achieved through compensation and or resettlements in their homeland–the West Bank and Gaza.  The UNSC should instruct the Israelis and Palestinians to negotiate on the basis of this outline under the auspices of the Quartt  and the leadership of the US.

The above terms provide a general framework with regard to the need to establish a two-state solution and address the core final status issues, starting with borders and security as proposed by President Obama. In doing so, the resolution should be framed as a continuation of prior resolutions and accords since the 1967 Six Day War. The resolution could serve to reaffirm UNSC Resolutions 242 and 338, which Israel and the Arab states have accepted, along with the 2002 Arab Peace Initiative and the 1993 Oslo accords–all of which have endorsed the land for peace formula, recognizing the vision of a two-state solution.

Having failed to persuade the Israelis and the Palestinians to resume negotiations it would be understandable if the Obama administration simply tries to veto the resolution in an effort to curry favor with Israel’s advocates in the US especially prior to the upcoming presidential election. This, however, would be a major mistake particularly when the US must buttress its influence at this time of change and upheaval.

Only a different, nuanced and creative resolution that provides international support for the two-state solution and a workable framework to bring the parties back to negotiations could prevent both Israelis and Palestinians from racing towards a new quagmire with unpredictable consequences.

AUTHOR
Alon Ben-Meir is a professor of international relations at the Center for Global Affairs at New York University. He teaches courses on international negotiation and Middle Eastern studies >>> www.alonben-meir.com