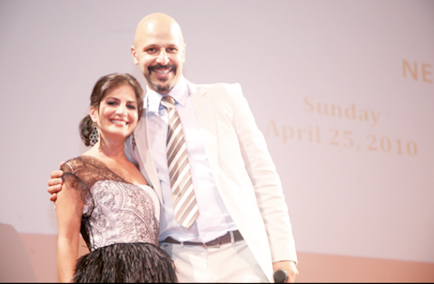 Over three decades after their mass migration began from their homeland, Iranian-Americans have reached the pinnacle of success in their new home. In widely diverse fields — from media to high-tech entrepreneurship, from senior ranks of the U.S. government to academia – people of Iranian origin have truly “arrived” in America. Now, having conquered the peaks of career achievement, they also want to give back. Having done exceptionally well, now they also yearn to do good.

This has been the main theme of the “Passing the Torch,” events, the flagship annual gatherings of the Public Affairs Alliance of Iranian-Americans (PAAIA), a non-profit organization founded in 2007 by a group of Iranian-American professionals and corporate leaders.

This year’s event — on September 18th — was especially noteworthy for being held in Washington, D.C., at the spacious Lisner Auditorium of George Washington University, in close proximity to the White House, the State Department, and other national and global institutions.

Over 1000 Iranian-Americans gathered at this year’s PAAIA event to pay homage to the latest round of honorees: men and women of distinction selected not just for their individual success, but also for their ethic of service and significant contributions to human betterment. The event’s co-hosts were the broadcast journalist Rudi Bakhtiar and the comedian/actor Moz Jobrani, who succeeded in keeping the audience enthused throughout the three-hour program, which was punctuated with cheers and standing ovations for every honoree.

Christiane Amanpour, host of ABC’s This Week program, and the former chief international correspondent for CNN, was arguably the most famous of the honorees. She advised attendees, especially the younger generation, to pursue their dreams with passion and commitment. “Failure,” she said, “is a key ingredient of success.” “I have never tried to hide my Iranian heritage,” she added, expressing pride in her roots in one of the world’s most noteworthy civilizations. She called her own and others’ experience of career success in America “bitter-sweet” — thankful for being given the chance to succeed in America, but never ceasing to wonder what it would have been like placing such levels of energy and talent at the service of Iran’s advancement.

Anousheh Ansari was another “star” honoree: a highly successful telecommunications entrepreneur, who came to America in her late teens in the 1980s, she achieved international fame for becoming the world’s first female space tourist in 2006. Her 11-day excursion into space was a life-altering experience: “looking at our little planet from space, teary-eyed, ” she said, “makes you think how much all of humanity have in common, and how small the things are that divide us.” Since that time, alongside her ongoing business pursuits, Ansari has travelled the world promoting space exploration as a conduit to world peace.

Nancy Pelosi, former Speaker of the House of Representatives (and thus the most powerful woman in American political history), who now serves as House Minority Leader, joined the proceedings through a recorded video clip. She applauded the achievements of America’s Iranian community, and introduced two of the honorees for their contributions to their adopted home, and to human betterment: Firooz Naderi and Nazie Eftekhari.

Firooz Naderi is currently the Director for Solar System Exploration at NASA’s Jet Propulsion Laboratory. In this role, he oversees JPL’s robotic solar system missions. He played a key role in NASA’s missions to MARS throughout the 2000s, and has received numerous distinguished service medals for his seminal scientific and managerial contributions to the U.S. and humankind. Upon being asked about how he reconciles the two sides of his identity, he replied, “I am American and Iranian.” He emphasized his deep love of America, and his deep attachment to his country of birth, which represents a great culture and civilization. Naderi’s commitment to Iran can be seen in his civic activism: as a founding board member and vice chair of PAAIA, and as a trustee of Encyclopedia Iranica, he has led in efforts to educate non-Iranians and second generation émigrés about the richness of Iranian society and culture.

Nazie Eftekhari, whose friendship with Pelosi had facilitated the latter’s video message, is a successful healthcare billing entrepreneur with a passion for community work and human rights. She created the Foundation for the Children of Iran some two decades ago to bring select children from Iran with intractable diseases to the U.S. for treatment. A trustee of the University of Minnesota Medical School, she recounted the challenges (especially in getting visas) and the rewards of providing world class medical services to those Iranian children who lack the means to pay for the exorbitant medical bills in the U.S. A gifted orator in both languages, Eftekhari also emphasized the uniqueness of the Iranian-American community which is comprised of the brightest, best educated, and most ambitious members of Iranian society.

Vali Nasr, who is now a professor of international politics at Tufts University, and a policy advisor on the Muslim world, as well as South- and West Asia to the Secretary of State Hillary Clinton and the late Ambassador Richard Holbrooke, extolled the virtues of combining academic work in the social sciences with providing advice to policymakers, so they have a better understanding of the world’s complexities as they make decisions. He related an episode involving Holbrooke that showed the late statesman and diplomat’s belief in the value of pluralism and inclusiveness in the American foreign policy establishment.

Faryar Shirzad and Ramin Agard spoke about the significance of government service by the Iranian-American community, as a key barometer of their full integration into American life. Shirzad, now a senior executive at an investment bank, was formerly the Deputy National Security Advisor for Economic Affairs and, prior to that, Assistant Secretary of Commerce for Export Administration in the George W. Bush administration. He extolled the virtues of public service by emphasizing a key attribute of American culture, which has made his own ascent possible: “it matters far more how well you can do your job than where you are from,” he said. In distinguishing government service from work in the private sector, he said that in the former, your clients are the American people, which means much greater responsibility.

Asgard, the newly appointed director of Voice of America’s Persian Service, addressed the career and personal gratification that government work brings. Having served as a political advisor to then-CENTCOM Commander General David Petraeus, and as a senior Foreign Service Officer with postings on numerous continents, he related the sense of surprise among many non-Americans, including foreign officials, when they discover a person of Iranian heritage serving in a senior capacity in the U.S. government.

Asgard’s observation is especially poignant since the U.S. and Iran have entered their fourth decade without diplomatic relations. Asgard extolled the ethic of service as an indispensable ingredient of integrating fully into the fabric of American life. In an article written in Tehran Bureau by Amir Bagherpour — an Iranian-American West Point graduate who is now a research director at VOA’s Persian Service— entitled “The Iranian Diaspora in America: 30 Years in the Making,” Asgard is quoted as saying, “As Iranian Americans, we need one of our own in Congress to really get recognized, but that requires better organization.”

Other honorees included, Dr. Pardis Sabeti, a geneticist at Harvard, and Dr. Nariman Farvardin, president of the Stevens Institute of Technology, who inspired the audience with their personal stories of creativity, achievement, and overcoming challenges.

As Rudi Bakhtiar, co-host of PAAIA’s “Passing the Torch” event put it, individually, Iranian-Americans are among the most successful émigré communities in the U.S. But they must try harder, she said, to make their collective achievements and image match their individual success stories. Judging by this event, they seem well on their way.

AUTHOR
Dr. Alidad Mafinezam is president of the West Asia Council, a Toronto-based think tank. He is also co-founder of the Mosaic Institute, and has taught public policy at the University of Toronto.