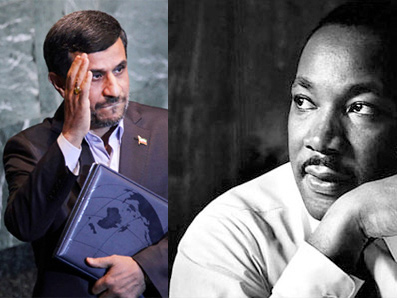 If April is the cruelest month, then September is the strangest. Strangest, that is, for Iranian-Americans. It’s the month that brings Iran’s mortifier-in-chief, Mahmoud Ahmadinejad, to New York City for the UN General Assembly. What absurdity will the man utter, we wonder to ourselves, what atrocity will he question, the existence of which minority will he deny this time?

To ward off against the embarrassment he reliably causes, the expatriates have invented ways to cope. Some of us reach for the bygone glories of the ancient empire and brand ourselves “Persians,” as if our modern humiliating predicament can be disowned by mere verbal adjustment. We wage vast campaigns to have cartographers reinsert the name Persian Gulf instead of Arabian and are enraged when Hollywood’s depiction of our kings is less than absolutely glorious.

Some of us head for the lyrical exit by resorting to our great — and greatly dead — poets, Rumi and Omar Khayyam, as if the extra consumption of sublime rhyme can neutralize wicked political rhetoric. Some cuss politics altogether as something base, something we can somehow live without. A few of us embrace our condition, gather in front of the UN, chain ourselves to what sturdy fence we can find, stage a day or two of the perfunctory hunger strike, which despite our nagging stomachs never makes the evening news.

We loathe Ahmadinejad. But what none of us will ever admit is that we are, however slightly, made in his image, too. After all, he’s not only a man, but also a culture — one of paranoia. Fear has silenced so many in Iran. Scores of activists and other innocent folks of all ethnic and religious stripes have been accused of espionage by the popularly-selected two-term president — for the Great Satan, for its “bastard child” Israel, for England, lately even China, and sometimes for all of them at once.

That fear is peculiarly transatlantic. With the exception of the rare hunger strikers, the rest of us, for honorable reasons or not so, are reluctant to be seen at demonstrations against Tehran, lest it jeopardize our travel privileges to our birth country or cause us trouble at the moment of departure. When visiting Iran is not a concern, the visiting and newly-arrived Iranians are. We slander incoming activists to the U.S. as being the regime’s spies and infiltrators. Even their history of imprisonment by Tehran is often deemed suspect as merely a decoy to disarm us. (The old opposition members already in the U.S. who can’t be cast as the regime’s agents are labeled as either neocons or out-of-touch lefties). So lives on our nemesis in our actions. So turns the cycle of accusation, leaving us scattered and disarrayed.

For a while, I struggled to find my own authentic place within this unhappy spectrum. At the end, it was the American in me, albeit relatively new, evolving and imperfect, that guided me in carving out my Iranian space. There’s a lot I’ve yet to learn about my adopted homeland, but this much I feel certain of: That drive-through windows are extremely efficient; that clarity and simplicity are virtues of good prose and also good living, and that protest against what shames a nation is the nexus from which that nation’s pride will blossom.

It was this latter conviction that led me to bring my two unruly little boys to the site of the new Martin Luther King memorial last August. With all the sophistication that six-year-old minds can absorb, I spoke of the man in the statue as the superhero who fought against bad guys and won. No other American better embodies the two Manichean forces that drive most Iranians I know: The love for the eloquence of the poetic form, and the suffering caused by a pervasive and ubiquitous injustice — not racial but a gender apartheid that has pitted father against daughter, brother against sister, and ripped wives from husbands.

No one better than Dr. King melds poetry with protest to show that the two are not only at odds, but complete and compliment each other. “Out of the mountain of despair a stone of hope” America’s best dreamer once said, which to my exiled ears echoes as this:

Out of the heap of a tyrant’s absurdities, a stone of grace from fearlessness, from dissent.