Who Made Saddam Into The Monster That He Became? 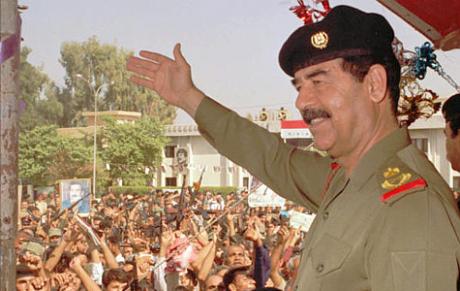 We’ve explored how he was armed and supported by various arms dealers and by some of the same Western governments who later were posturing about human rights abuses by Saddam.

We’ve explored how the gulf Arabs supported him, and how the UN consistently ignored his use of chemical weapons and starting the Iran-Iraq war.

Now let’s examine what sort of mentality produced him.

We’ve visited how the West armed him.

We’ve discussed how the governments and businessmen of various countries supported him and enabled him to survive, so he could inflict greater harm than he would have if they hadn’t done it.

The UN ignored it when he started the Iran-Iraq war. They also didn’t do much about his use of chemical weapons. Nore did the US government seem to mind, while it had people in the DOD over in Iraq assisting Saddam against Iran at that time.

That perhaps isn’t such common knowledge among the Iranian public, but there has been open discussion about it. The discussion is ongoing, and we’ll see where it goes. In fact, much of that discussion was helped by Westerners themselves who had the courage to admit that they contributed to the making of a monster.

Now let’s explore how Middle Eastern culture might have contributed to the monster that Saddam became.

Of primary importance in the Middle East – whether we’re discussing Arabs, or Iranians – is family reputation: they are all about their family honor, and their family background.

…. and whether we’re discussing Muslims or Christians… they have pretty much the same basic attitude. Its all about how great their parents or children or relatives are supposed to be.

That’s the whole center of their lives.

They are obsessed with bragging about their ancestor or famous relative, or their kids or who they are related to.

If you spend enough time with any Middle Easterner, you’ll probably eventually be told about what a great family they come from, or how important their relatives were or are, how big and important their job is, etc.

Reputation is very important in the Middle East. Whether we’re talking about Iran or Iraq, pretty much the same mentality holds sway in both countries:

If your relative is a great person, you’re honored.

BUT… if your relative is disgraced, SO ARE YOU!

The ridiculousness or unfairness of this doesn’t seem to strike anyone. Its what they’re used to. Like a pig lying in its own filth, Iranians and Arabs both luxuriate in a sense of superiority based on who they’re related to, or feel inferior for the same reason.

The self-determinism and freedom to be who you are – or who you want to be – based on yourself is virtually absent.

If an Iranian or Arab wants to insult someone, they inevitably talk about the target’s family member: i.e. their sister, father, mother, wife, aunt, etc.

They’ll try to dishonor your family, or elevate themselves in some petty “mine is better than yours” contest over who comes from the bigger or better family.

Frankly, I don’t give a sh-t about who I’m related to. I know that far enough back, ALL of our ancestors defecated in the wilderness and had intestinal worms, and were hunted by carnivores.

The pretense that anyone walking around today is great or small because of who they’re related to is funny, because every snob or beggar had the same cavemen for ancestors.

I’m not flattered by people wanting to associate with me because of which important person I’m related to; I’m disgusted by it.

Not only is this attitude disgusting to me, it can be quite harmful.

According to what I’ve read (and anyone out there who knows better, please feel free to correct me), Saddam Hussein was born out of wedlock.

That’s right, he was a bastard.

Being born in any Middle Eastern country and being a bastard is really a curse for reasons I’ve already explained. There is almost no way such a child can grow up to be a normal person. They will not have ANYONE’s respect.

Saddam was reportedly taunted and teased for the fact that he was born out of wedlock. In other words, the society around him tormented him for something that was not his fault.

I’m not defending Saddam here, or trying to justify anything he did. But its important to understand things.

Saddam was born and raised in a Middle Eastern country. He is the product of that culture.

What effect do you think that the teasing and taunting had on the small boy, Saddam?

Imagine that you are a child, born into the world without knowing or understanding it – and you are blamed for what your parents did.

In other words, you are being blamed for something you cannot even yet understand.

Of course, anyone who isn’t an idiot can see what effect this probably had on Saddam. What did he grow up to be like?

He killed anyone who didn’t like him. He forced people to put on shows of affection for him. He put statues of himself everywhere. He obsessed over his stature in the Arab world. He probably made up false stories to cover up the shame of his origins. And he started a war that killed off so many innocent people.

The society that made him into what he became in some ways ended up on the receiving end of all of the abuse it had dished out to him.

Literally, “It is from us, that is upon us”, or loosely “what we have reaped is what we sowed”.

In the West, they have a different saying.

“Every nation gets the government it deserves”

A logical outcome of all of these Middle Eastern heirarchies of miniature make-believe dynasties and fake pretentious royalties – where people  are respected or not based on who their father or mother is – is something like Saddam.

Whenever I deal with Iranians and listen to them brag about their relatives, or try to make their family look really big and important, and try to elevate themselves by elevating the make-believe importance of their family or relatives, I remember Saddam…

Whenever I hear them putting down someone else over who they’re related to, or trying to diminish the other person’s self-respect by pointing to their relative or insulting them, I remember Saddam..

…and various other examples of people who were undeservedly scorned or rejected, and who came back to haunt the society that produced them…

… and I am more glad than ever that my mother is American and I don’t have to care about this sh-t or deal with it.

Who made Saddam into the monster he became? Middle Easterners did. Their culture did.