For a better world 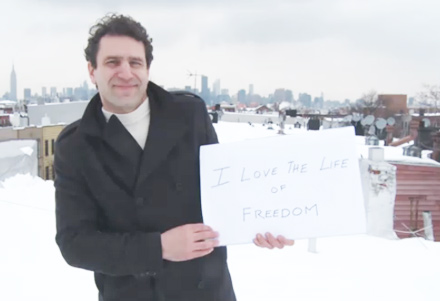 Last week, an Iranian musician posted the following statement on Facebook: “Music is my religion and I believe in keeping politics separate from my faith.” A day or two later I learned that a New York-based singer-songwriter Stephan Said – who was mentored by the late Beat poet Allen Ginsberg and whose politically charged lyrics have won him comparisons with Woody Guthrie – was releasing his latest album, difrent, to coincide with the UN International Day of Peace. Said sings in English, Arabic and French on the album and had an all-American childhood in Appalachia. After some badgering on email I finally manage to pin the 43-year-old down to ask some questions…

Do artists from countries such as Iran and Iraq have a duty to be political? Is it irresponsible to set out not to be?

Everything every one of us does is political, either expressly or by omission. Music, even without a political lyric, is inherently political. It always has been, because sound itself breaks borders. Anyone who doesn’t think so is either ignorant of history or has lost their own heritage (in this case, think of the legacy of Persian, Arabic, and Urdu poetry and the current of freedom that runs through it all).

Our generation is faced with a global crisis that politics as usual is failing to lead us out of. We are at a moment when artists are obligated to help move humanity where the silent majority knows we must go but the powerful minority is refusing to lead us to.

You must have been asked many times how you feel as an Iraqi American. How did you cope during the war?

The question is how DO I cope – the war’s not over. Of course, growing up, there’s not been a day I haven’t had to worry that my family could be killed at any moment for no reason and this has had a major impact on my life and work.

It’s difficult but also comparatively easy for me. I have the luxury of sitting here in the US while my family can’t leave their homes to shop. Their country has been destroyed – possibly forever – and the entire region is destabilized. I believe I have a responsibility to use my access [to music] to create understanding and peace because I am someone who has a unique opportunity to reach across borders.

Some years ago, Daniel Barenboim and Edward Said set-up the West-Eastern Divan Orchestra for young Palestinians and Israelis. Don’t you think it’s naïve to think that music can unite people in the way you intend to?

I believe what they have done with the orchestra is beautiful just as I believe the hardest hitting hip-hop MCs taking a firm stand for love and justice is beautiful because every action in the right direction is needed and indispensable – every raindrop is necessary to overflow the dam.

However, I do think that music and musicians have lost their power as a unifying force because they have allowed themselves to be commodified and trivialized, divided up into a hundred genres and target markets, acquiescing to the segregation of modern culture for profit.

The greatest hip hop MC today wilfully relegates himself to a world of no interest to the average classical, world or country music fan – and vice versa, Market forces are geared to selling more records and making names. Meanwhile the world is imploding. What a joke. The movement we need today – for a systemic shift in the global economy – will take everyone and will take a music movement that intentionally crosses boundaries and refuses to be only hip hop, only classical, only rock, only world, and so on.

What is difrent aside from the name of your album?

It’s a huge global initiative for music for social change. I’d released numerous songs to build social movements and knew that our generation needed to build a sustainable movement for systemic change internationally. We needed a bigger, longer, and sustainable plan. So, I decided to attempt my best musical production and then use that album to launch what is a broadcast platform and network of music and culture that is making a better world.

The music itself was my most personal, uplifting and universal. You might call it pop, whether it’s the love songs or anthems to global unity – they’re all love songs, to humanity. I was lucky to work with one of the most esteemed producers in the world, [Grammy award-winning] Hal Willner, who has a great mind and soul. What a genius.

Your band members have played with some legends – how did you attract them to the project?

They’re world class and have worked with the likes of Dylan, Springsteen to Lenny Kravitz, Common, Shania Twain and Janet Jackson. They all wanted to get behind something they thought could make a difference, something other than the corporate product that music had become.

Are you happy with the result – I mean would you have liked the album to percolate more?

I’m very happy with the result. In an era of machine-generated music, difrent: is a live recording, played with soul by some of the best musicians alive. There’s no artifice, no grandstanding. I wanted it to be pop and accessible, but undeniably human, handmade. So when people see it live, with real players interacting with them taking the energy higher, it’s even better.

When was Difrent set up and are you pleased with its progress – any concerts planned?

Difrent was a dream eight years ago but it beta-launched last year when I was asked on short notice to headline the UN’s Millennium Development Goals Awards show in NYC. I now want to tour all over the world – wherever people want us to come, they can write the website (http://www.difrent.org). My hope is to develop the network, a major live-for-broadcast show and concerts, and to use touring to invite young upcoming artists around to world to take part so that their voices are heard. That’s the main aim.