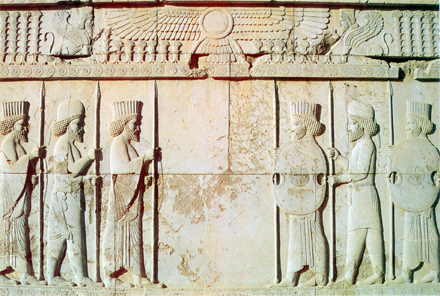 A few days ago a fellow blogger have published an article [The art of lying] on this site analysing and questioning Iranian people’s attitude, culture and even the legitimacy of their historical claim (perfectly within his democratic rights).

I tried very briefly in the comments for that article to provide a few answers and point our friend to the flaws in his argument.

However this subject has proved to be more important to be left to a few comments as it needs further analysis. Hence I saw it upon myself as my duty to firstly as a fair person who would like to consider himself democratic and open minded, and secondly as a patriotic Iranian who loves his country, its people, culture and history, to put pen on the paper or rather hands on the keyboard and provide some answers to our friend and any one else with the same state of mind.

Now! To be fair to our friend he did not get everything totally and utterly wrong in his article and there were some elements of truth in his argument and logic.

However I personally believe, what is even more dangerous than a lie or a false statement is a claim that only contains half the truth, and attempts hide the lie, the error or the claimant’s radicalism behind that truth. Because this is where the misunderstanding arises, which is the mother of all evil.

So to be fair to our friend I am going to accept some of his arguments. For example some and NOT all Iranians lie very easily and most of the time lying even gets them what truthfulness doesn’t. I would also admit that currently there is unfortunately a culture of cheating, bribery and lying in the IRI system which has grown over the past 30 years and contaminated our culture and society. And most important of all the majority of us find it difficult to accept our mistakes and change course or apologize for it, but instead attempt to make petty excuses(as my father use to say ozr-e bad-tar az gonaah)

However these flaws are NOT universal to all Iranians as most of them are ordinary hardworking, decent and honest people trying to make a honest buck in a difficult impossible situation where the IRI, its incompetency and its malevolent behaviour in both domestic and international arenas has made it more difficult for them by making sure that even the simplest task turns into an impossible challenge day in day out.

Furthermore as I stated before these flaws are not in any shape or form unique to Iranians. I can assure you that I have seen it also here in the West over the past 20 years and believe you me I have observed and suffered from many similar if not worst behaviour from citizens of other nations.

On the other hand we Iranians also have many good characterises. Most of us are hard working law abiding, innovative and smart clever people. Furthermore in any western country that I have travelled to, Iranians are one of the most if not the most successful immigrant society with very high levels of achievement both academically and financially, and believe you me, this is not just an exaggerated claim to please the audience here

During the time I have been living and working here, any university or large company that I have dealt with benefited from many clever smart Iranians at the top level.

Even for those who selected to open their own business, I know of many examples of hard working Iranians who started from zero and worked hard to build a business empire. Now, I can assure you that they would not have been able to achieve such successes, if they were not hard working decent clever and most importantly honest people.

However as I told you just like any other nation on this planet WE ARE NOT PERFECT and neither should we claim to be. Of course this is true that some of us have many problems including yours truly and there is no shame on admitting and pointing out to those flaws and trying to address them by dealing with the root causes.

But this is a process that we have to get right or it might backfire badly and do more damage than good.

So, in my humble opinion:

* First of all we can not and should not generalize, as in any society including Iranian there are good and bad elements around.

* Secondly it always pays more to highlight the good characteristics of
our people and especially those of our national heroes and trying to
build upon them by encouraging others (especially the young generation)
to follow their example. On the other hand attempting to demoralise our
people by pointing only and only to the negative aspects and misdeeds of
a few we help no one and do nobody any favour.

*  Thirdly for any bad behaviour we need to be fair and consider the circumstances that lead to it and its root cause. However this would not be in order to let the guilty party to escape answering for his/her act by making excuses for it, but it would be in order to find and address the root cause and hence to prevent future recurrence of the such bad behaviours

* And the last but not least, educating our people on the principals of
fair society, democracy, tolerance, honest behaviour and the long term
benefit that these will bring to all of us.

On the other hand trying to sweep everyone with the same brush and attempting to belittle a whole nation, their history, culture and identity will bring us noting but more division, mistrust, resentment, hopelessness and misery and the only winner parties out of that situations would be the dictators like IRI who are looting our assets and foreign governments and co-operations who will be at the receiving end of our stolen wealth, both capital and intellectual.

Furthermore under the current circumstances such attitude is the last thing that we need; as such demoralisation of ourselves is what the IRI wants and thrives on by trying to convince us that ”they are all we deserve and we are as bad as them”.

So my advice to you is: Yes be critical, yes, ask the difficult question and yes, point to the weaknesses. But if not for God sake for your own and your children’s sake be fair, be honest and most important of all be respectful