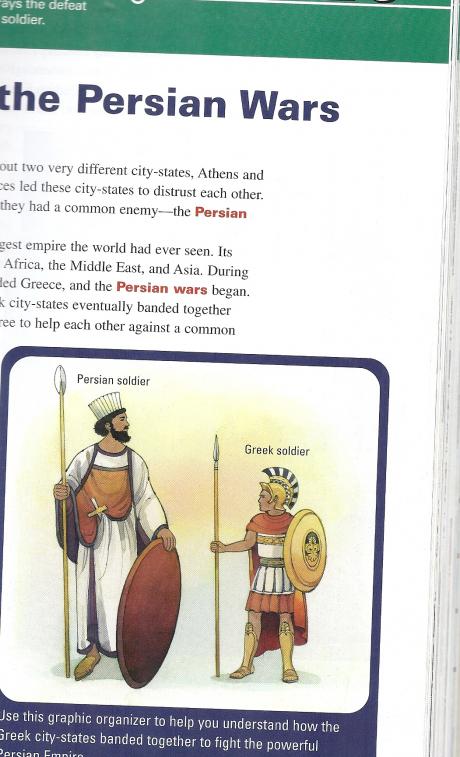 This picture was scanned  from 6th grade History book of California .The book in detail talks about Sumeria, the  donkeys that once passed dusty  street of Judea ,but ignores  Persian all together until comes to demonstrate the bravery of Greek warriors. While it admits that Persian Empire once one of the largest empire ever build, (the  only time Persian are mentioned ,which is ok, not a big deal), in detail promotes the bravery and heroismaction of Greeks. To make it more exciting a picture is added to the book .The drawing portrays a Persian soldeir twice as tall and twice as big as the Greek Soldeir  facing each others.As you turn to page,274

the history book turn into a movie script  titled” The Battle of Thermopylae ,The bravery of the 300 “.

I am not passing any judgement but is  this a mere  academic  error  or academic  bias  encouraging   students to develope a sense of   superiority toward East  or  quietly proposes that Easterners are threat to freedom and democracy?

I hardly like to glorify the past because present time is the contemporary version of the past. Swords and horses are  replaced with more powerful  killing machine and faster mobility, but the fact still  stay the same.We have advanced technically but  still fighting for territory and survival  to a point that  empty buildings and structures  staying in tact means more than human lives. ( a nuetron bomb kills all the living but leaves the building and infra structure intact).Is it really that bad and horrible once in a while Iranian mention their past and be proud of it?