How Useful Are Iranian Know-It-Alls And Their Advice? Part 3 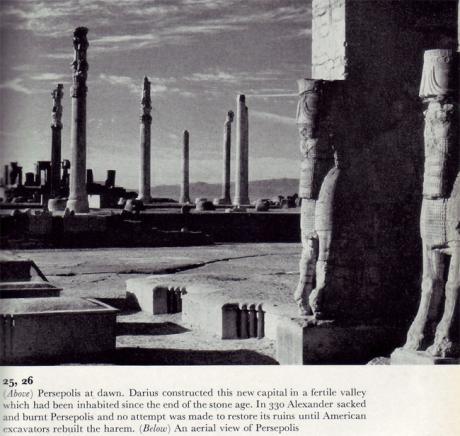 (Above: A figure from a book about ancient Iran, titled “The Heritage of Persia”, by Richard N. Frye, “Agha Khan Professor of Iranian” at Harvard, published in 1962 by Weidenfeld and Nicolson)

Why didn’t Iranians discover or even show interest in their own archeology?

Why didn’t they discover ANYTHING inside their own country (let alone anything in any other)?

Take a look at the illustration above that I scanned from a book, and I’ll tell you a story about it.

When I returned from Iran in 1991, we stayed in a friend’s home here in America.

I believe it was the occasion of Hazrat Ali’s birthday, and a gathering of religious Iranian men took place there. I sat bored, listening to the man reciting in Arabic I didn’t understand. It sounded like a warbling moan. This was the familiar nohe “singing”. The men around me were utterly absorbed in it, but I couldn’t understand any of it. I could only sit there for a short period before I got utterly bored out of my mind, and got up to go outside.

Outside was America! I hadn’t seen it in eleven years. I took my first walk. A young American man and woman were walking in front of me. Wow! I was seeing Americans again. I couldn’t believe it. I took a deep shuddering breath. It all seemed like a dream.

Along my walk, I happened to find a used book store that specialized in rare books. I had often searched Tehran for English books. These places were treasures for me. I went in, and browsed through the canyons made of books. By chance, one of the first books I picked up was an archeology book about Iran, written by an American archeologist. A glance at the inside pages showed ancient Persian coins, and examples of words in ancient Persian and Pahlavi.

I learned from the book that the ancient names for Iran (depending on which era) were “Eranshahr”, and “Aryanam Khshathram”. How interesting! I had never heard about that from Iranians.

The similarity between the Persian variations for the word for “star” (setareh, ashtar and akhtar) and its English equivalent were immediately obvious; a significant indication of the relatedness between European languages like English and Iranian languages.

I wondered why I had never heard of these things from Iranians.

I was excited with my find, and took out my money and checked the price to see if I had enough to buy it; I had just enough! So I bought it.

By the time I left the store, I had already read a few pages. I walked back to our friend’s home to be able to read it there, and to show the book to the others.

When I got there, the ceremony was just winding up and the men had risen to stretch and drink tea, etc.

I showed the book to everyone.

Only two of the men showed any interest; one was my father (I’m proud to say). The other was the man who had been reciting the remembrance chants and hymns (or whatever you call them). Both of them examined the book respectfully. But no one else was particularly interested, and one of them men looked somewhat irritated, and said: “Hala inha bishtar dastaneh” (“Now, these are mostly stories”).

My father disagreed with him, saying “No, these are true”.

The man who had been chanting continued to look at the book.

Observing the reactions of these different people, I learned something about them, and about religious Iranians in general.

Only two of them – significantly, one of them was the person who had lead the ceremony – had shown any interest.

One of them had actually dismissed the relevance or importance of the book.

… and I had learned something about them.

What I was seeing was a microcosm of Iran – of its religious community.

On the one hand, there was a general apathy to outside and new information.

On the other, there was both an interest and a rejection of it by two different minorities who seemed to disagree with each other slightly.

Unfortunately in Iran, the critic often holds sway and wins out – crushing any impropriety and ironing things out so that things stay familiar and the way the critic wants it to be.

The critic might be safeguarding something; keeping it clean and unspoiled. Being in love with his small world, he might want to keep it his, and to keep it free from anything which suggests that there are other things out there; valuable things, that are missing in this small and limited world; things that cannot be found or obtained from within it.

Thinking back to the ceremony, just before I left, I remember hearing the reciter interrupt himself, and say: “I don’t think we should make an idol of Ali or this thing we are involved in”. These words seemed to me more meaningful, when I remembered that HE had shown interest in the book, and was briefly looking through its pages, deeply absorbed – ignoring everything else in the room.

The interest didn’t last of course, and I ended up being the only one there who would even read a whole section of the book. However, I still appreciate that he did show interest.

Had I spent time with him, I might have found that his interest could have grown beyond looking at the book for a few minutes.

But our meeting was brief. I didn’t live in that city. Nor did I know these men.

And there was always the danger that the critic among them would exercise his influence on me, and browbeat me into submission towards his holies, so that they would have exclusive hold over me. Exploration would have been over for me, then.

Maybe the only reason that I still have the book, and still read it, is that I never could follow the Arabic, and so I broke away from this group. As a result, their ideas or decisions about what I should be doing wouldn’t completely prevent me from exploring the world on my own.

I was mistaken to say in my previous entries that there is only one Iranian I’ve ever met who was interested in wildlife or in pursuing animals in their natural habitat. There is another Iranian here in America whom I know who is also quite interested.

He had not too long ago gone to Costa Rica on a trip. He had arrived there, full of excitement, ready to embark on his quest,

He encountered a group of Iranians who had also just arrived there, full of excitement, ready to embark on their quest.

The other group were middle aged Iranian men, who inquired from him what he planned to do in Costa Rica.

“I came to check out the different species of monkey they have here”.

They laughed mockingly at my friend. How ridiculous! What an idiot they considered him to be. What a waste of time! Why didn’t he come with them, and get serviced by some young underaged prostitutes?

That’s why THEY had come!

My friend was shocked and disgusted… and hurt.

He is a deeply sensitive and intelligent boy who was raised in America, and absorbed from the West a reverence for things these men couldn’t comprehend.

They viewed Costa Rica – and the West – as their pit stop for whores. That was what they saw in it. And they mocked anyone who saw differently from them. They rejected and made fun of my friend’s interest in the species of monkey.

“Haha! He came to see monkeys!” They laughed long and hard at him, with their big stupid noses.

None of them showed any interest whatsoever in the wildlife of Costa Rica, or any details about that species of monkey; they came for ONE thing!

My friend learned something about Iranians from those men – and it wasn’t the first such lesson he had learned in his lifetime.

This was in fact another microcosm – it was a sample of Iranians who had come to the West, and who just saw it as a means for personal profit and their selfish narcissistic entertainment. They had no understanding of the West, no true appreciation of it, either.

… and like the prostitutes they were going to use and had no love for, they came here to use it; they have no feelings for it. There is no sense of wonder or discovery. No one can teach them anything. They aren’t interested in anything. The most interesting thing in life for a monkey is just its banana.

These were men who were proud to be irreligious, and who mocked religion; men who were the opposite of some of the religious men I mentioned earlier, but who were no better – and who were in fact in some ways worse.

I respect them A LOT less than the narrow-minded types of religious Iranians.

My friend had gone to Costa Rica to study monkeys. But he discovered this invasive, non native species – a lower life form, instead: Iranians!

The only reason my friend has retained any independence from these Iranians – which he has unfortunately been surrounded by since childhood – is that he has broken away from them, and has become an independent seeker of truths and things of value that lie outside of their mediocre and limited existences.

But you can’t entirely get away from these “Persian” monkeys and their limited appreciation for anything they aren’t already familiar with, when you are related to them.

My advice to any young Iranians who wish to break free of their destructive household know-it-alls, is: don’t be affected by these people. They don’t know anything. They’ll always mock or scorn anything new you try to do.

One must live ones own life, and to do so one must be rid of dream killers.