Why Are Middle Eastern Dictators & Terrorist Leaders Such Cowards? 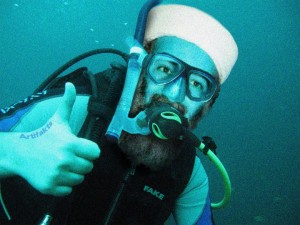 Have you ever wondered why these petty Middle Eastern dictators and terrorists such little well…how shall I put it…chicken shits?  Seriously, if you want to appear on YouTube and/or spew your diarrhea of the mouth on CDs and tapes, and tell your followers to resist the “West,” the “imperialists” and the “colonialists” at all costs or to blow themselves up in the hopes of killing some little shit town Afghanistan village elder –and 87 civilians to go along with it—you should at least have the decency of not hiding in a rat hole when the adversaries come for you, no?

Adolf Hitler had the decency and the dignity to put a bullet in his head.  Why can’t you do the same?  Why do you have to hide in a spider hole, a drainage ditch or a house in Pakistan where you fornicate with your young third (or was it fourth?) wife, dye your hair and beard to look like a fresh young lad when you appear on one of your “jihad” tapes?

Are you better than the other Muslim brothers that you command to die for your cause?  I thought you were all equal.  I Guess not.  But what can you possibly expect from a culture whose great Prophet skipped town at the first sign of danger and left his disciples behind to be killed and then placed his cousin in his bed to be killed in his stead when he found out about an assassination plot?  Incidentally, being that he was a messenger of God, and presumably had an instant message line directly to big guy upstairs, couldn’t he just perform a miracle (or ask God to perform the miracle) and turn the would be assassins into frogs, goats or some other harmless creatures?  Why did he have to hide in a cave (just like those of his followers who have emulated his “leadership” style ever since) at the first sign of trouble?

And where is that other coward, Ayman Al-Zawahiri?  Why hasn’t he sat behind the wheels of an explosives filled truck yet and blown himself up at an American base in Afghanistan? Where is that piece of human filth?  Is he emulating his Prophet by hiding in a cave also and sending other people out there to die for his cause?

I have a feeling that the same will be true when they come for Khamenei.  He will probably be hiding in the Jamkaran well along with Jannati and the entire top echelon of the IRGC.  That’s how all of these cowards will meet their end.  In a rat hole, just like the rats that they are!