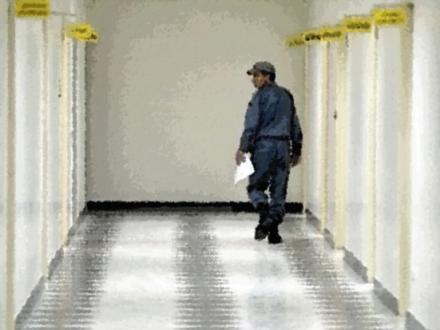 An Iranian hacker recently broke into Evin security files and accessed their accounting data. These documents reveal names of all current and former employees of Evin prison including their contact information starting with each individual’s job title, salary, cell phone number(s) and home address.

“Operation Evergreen” is the code name for this list which is currently in circulation via email. The document exposes all individuals working at Evin. As an Evin employee whether the individual serves tea, answers phones, cooks in the kitchen, serves in a medical capacity, interrogates, administers torture, or is the resident mullah/judge, he or she is considered prosecutable in the court of law as a criminal supporting an institution in which innocent people of all ages are systematically tortured and murdered. The gates that allow for Evin employees to drive in and out of the prison facilities are now being closely monitored and vehicles are getting marked by code signs for successful targeting and possible humane rendition purposes. Since this information was leaked, some employees have taken to walking to work and in doing so are getting photographed as they enter and leave the premises. The list is constantly getting updated with employee photos. Soon it will also include additional details such as names of outside contractors per the captured accounting information.

Odds are strong that when the targeting is completed efficiently and effectively, Iranian citizens will no longer be held hostage by fear of Evin and its criminal workers. Future plans for this site: After all political prisoners have been released and individuals incarcerated for valid criminal activities are transferred to non-torture practicing facilities, the building is to be destroyed and an ever green park is to replace the notorious Evin torture chambers.