How Useful Are Iranian Know-It-Alls And Their Advice? Part 4 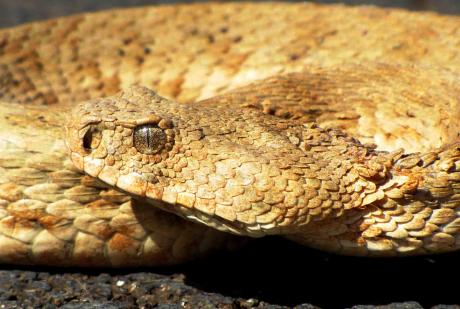 While I’m asking those questions, I’d like to pose another – since the answer to them all might be related: why didn’t Iranians discover and study their own snakes?

Above is a picture of one of the biggest species of snake to be found in Iran, Vipera lebetina.

I got the picture from here:

While reading about Iran’s snakes, I didn’t come across a great deal of evidence that Iranians had named any of their own snakes – even with common names. I’ll immediately reverse my position if I see evidence to the countrary.

Nevertheless, there appears to be a derth of either knowledge or attention to genuine observable specifics about snakes in Iran.

However, the above case seems to be an exception.

It seems that only a few of Iran’s 60 or so species of snake were ever noticed by Iranians, to the point that they could actually tell the difference between one species and another, and record these observations and make use of them.

A snake is a snake, to most Iranians – and they already “know” all about them by having heard rumors about them (rumors that would make a herpetologist’s body temperature reach zero degrees kelvin).

Still, I’m quite surprised that Iranians actually have a few snakes that they did notice in their thousands of years of living in Iran.

In America, even the poorest redneck knows the difference between a garter snake and a coral snake, or a king snake and a “cotton mouth”. While growing up as a kid, all of my friends in America who were not from the inner city had either tried to catch snakes, caught them, or observed them in the wild.

… and America’s so-called rednecks haven’t had thousands of years to study their own country’s wildlife, unlike Iranians.

As a kid in Iran, I did what I had done in America – I caught snakes and took them home and tried to feed them in captivity. Iranians thought I was crazy. They never showed appreciation for such activities, and in fact ridiculed me constantly.

These things have no meaning in Iran culture; fooling around with snakes is seen as childish.

Why is it seen as childish? Because consensus in Iranian society says so.

A medical student I was friends with constantly expressed his annoyance with me for catching snakes and other creatures. He once “complimented” me, when I had forsaken snake catching for a while, telling me that the fact that I no longer do it shows that I have “grown up”.

Taghlid – i.e. emulation – is what they are good at.

Tahghigh – i.e. research – is something that is almost unkown in Iranian culture.

So whenever I get a pat on the back from Iranians, I do a reality check and ask myself what I’m doing wrong.

At the end of all those years of catching snakes in Iran, I had caught and brought home three poisonous ones.

One of them was Ironically caught in the north (near the Caspian Sea) outside of the villa of a spoiled rich Iranian who had just informed me with an air of absolute certainty that there were no poisonous snakes in that part of Iran.

Immediately after he pronounced his commandment, poetic justice struck.

I got bored – as usual – with the dumb conversations Iranians have, and went outside to investigate the area. Right outside of his front door, curled up on a wet log, was a little Caucasus viper.

It was like a little piece of jewelry. It was so beautiful. Its eyes’ vertical pupils and their yellow irises looked like little gems.

It was damp and cool, and snakes are not very active at low temperatures, so I was able to scoop the little fellow up. He nestled in my hand, enjoying the warmth.

Here, look at this, I told our know-it-all host.

He immediately dismissed it.

When I started prying open the snakes mouth with a pen to show him the fangs, he still insisted that poisonous snakes weren’t found in that region.

As if to underscore its own existence, the little snake bit me. As I sucked the two little puncture marks on my thumb, the Iranian friend calmly dismissed the significance of this, and said that someone must have brought it there from another location – the snake couldn’t have been from that area.

… and his pronouncements were gospel, because despite the reality staring him in the face, his family owned a villa and he was an important person.

(Luckily no poison appears to have been injected, since no swelling developed, and I didn’t come down with any symptoms. I’m sure if I had been poisoned, that guy would still probably have found a way to avoid admitting that he was wrong and didn’t know what in the hell he was talking about).

Towards the end of my eleven year stay in Iran, I had invited someone over who had graduated from one of Iran’s most prestigious high schools, and was pursuing a degree at a prestigious Iranian university. He had told me that he had a tested IQ of 160.

Naturally, I was impressed with him – he was a bright fellow, was pursuing a degree in one of the applied sciences, and was well read.

…. or so I was impressed with him until he started telling me a story about how he had killed a poisonous snake in the bagh (orchard) that his family owned.

He told me the story with an air of how-to-deal-with-snakes.

Here’s how its done!

I couldn’t quite believe that I was hearing such rubbish from him – I had heard it all before from the dehatis, but didn’t expect to hear it from him.

This was the son of medical doctors, with a genius IQ.

He then went on to inform me of how he had burned the snake’s carcass after killing it.

Why? So that its mate wouldn’t come looking for him…. and take revenge for the death of its loved one.

I really didn’t know what to say.

Here was my friend – the toast of his community and widely celebrated by the Iranians around him as a big “success” – telling me utter nonsense and superstition about snakes as if it were fact.

I – who had been catching snakes all these years – tried to interject and question what he was saying (“Snakes don’t really do that, do they?”).

With an air of authority and superiority he gave a slight nod with his head.

To underline the certainty, he smugly said: “Yes they do” (i.e. snakes), as if correcting ignorance.

From him I learned that:

– Snakes have all their muscles on one side of their body, and can only curl in one direction (despite the fact that they obviously travel in straight lines by twisting back and forth!).

– You can avoid being bitten by picking the snake up by its tail(!), using your left hand. This will prevent the snake from striking you.

– Snakes form emotional relationships with each other. Snake husbands and wives take revenge on whoever kills their beloved spouse.

– You can prevent that from happening if you burn the snake’s body. Then the snake’s way of finding you (through the snakes supposed little radar-like detector or facial recognition or whatever) will be thwarted.

– You should take this precaution because snakes could even travel across country, from city to city, in their quest for revenge, and being in another city from the area you killed the snake’s spouse in won’t save you!

I was speechless. I had reached a wall that exists in Iranian society, and that limits progress and creativity.

I was not a marja’. I had no degree, no importance, no official title, and therefor no recognition among these people.

I couldn’t even show them what was in their own country.

But when Iranians give you advice or make statements about something, they supposedly know what they’re talking about.

You’re supposed to just cave in to their sh-t.