Gaudi: When God is Man’s Client 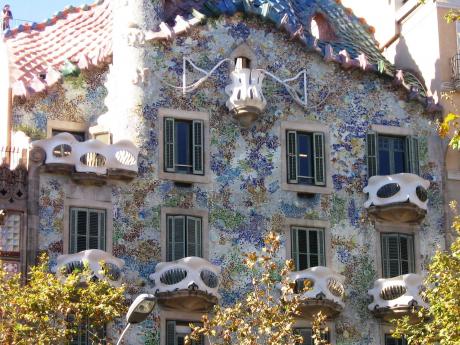 When I was in Barcelona, I picked a few places to visit.  I thought I had seen enough churches and cathedrals and palaces in Europe; so I set myself ready for fast boredom. But I came across something entirely different from anything I had ever seen.  Works of Gaudi, the nineteenth-twentieth century Spanish architect.

There was something about them, all of them, that is very difficult to explain.  Sagrada Familia, Guell Park, La Pedrera, and … shared common elements of waves, curves inspired by nature with incredible details. Some were decorated with broken tiles, some contained wrought ironworks or stained glass, but the ones impressed me most were those with eyes and gaping mouths.  Can you imagine terraces with eyes that peer at you? I walked about building and structures that looked back at me: they seemed to be saying something to me. And I think they will continue speaking to generations to come. I never had a sense that Gaudi had passed away some years ago (in the 20s). For me, he seemed very much alive watching with the eyes of his creations.

Guell park was a multi-level park with huge circular benches that curved about -decorated with ceramic, painting, and broken tile. At the entrance, I marveled at the lizard thinking only Gaudi’s spell can  lead me to stare at such a creature with dreaming eyes of wonder, with utmost fascination.

There is no shortage of massive overgrowth of cement on this planet; we have one in Toronto (CN Tower), but they mostly come with an expiry date.  The day something taller comes to exist is the day we forget about the former tallest. These often look alike and generally lack  spirit. But as I walked about Sagrada Familia, I couldn’t help thinking that there would never be another Sagrada Familia because there would never be another Gaudi.

A catholic who never married and devoted his life to his art, Gaudi began building Sagrada Familia, a monumental cathedral, knowing that he would never be able to finish it.  He spent the last forty years of his life on it, when he was asked, “But when will it be complete maestro?”, he responded, “My client is in no hurry. God has all the time.” Decades after his death, construction of Sagrada Familia is in progress -supported mostly by donations.