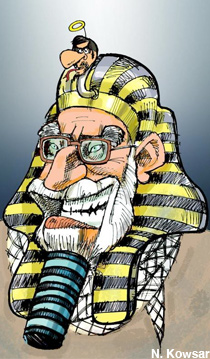 Iran is once again in America’s cross hairs. Even before the allegations of an Iranian plot to assassinate the Saudi ambassador in Washington, concerns about Iran were high, with an impending U.S. troop withdrawal from Iraq possibly leading to increased Iranian influence there. U.S. opinion and decision makers are expanding their estimate of Iran’s adventurousness and calling for new containment measures.

In both exercises, there is room for misjudgment. In fact, Iran has not become more ambitious of late; rather, its aspirations have been underestimated. As for attempting to rein in Iran, that could prove both counterproductive and unnecessary.

Until recently, the U.S. government regarded Iran as subdued, weakened and relatively isolated. There was considerable evidence for this view. Iran’s leadership is deeply divided. Its economy is reeling as a result of economic sanctions, which have reduced trade and therefore contact with the Arab world.

What’s more, Iran’s standing in the Middle East appeared to be declining after the Arab Spring. The “Arab street,” once enamored with Iran’s bluster, is now turned off by the country’s suppression of dissent at home and its support for the oppressive Syrian regime. Iran’s Revolutionary Guards are helping Syrian President Bashar al-Assad put down a growing uprising. The possibility of a collapse of the Assad regime threatens to confound Iran’s plans for regional domination. Syria is Iran’s main Arab ally and its conduit for aid to Hezbollah, the militant, Islamist Lebanese group that Iran has used as a proxy to menace Israel, the U.S., Lebanon itself and others.

From Tehran, however, the situation looks quite different. For one thing, Iran is not as worried about losing sway in a post-Assad Syria as many in the West think. Iran calculates that until Syria gets back the Golan Heights, a plateau captured by Israel in the 1967 war, any government in Damascus will need Hezbollah as a force to pressure Israel. And with Hezbollah comes Iranian influence.

Iran’s leaders are clearly preparing for the possibility of Assad’s fall. Even while claiming nefarious outsiders are fomenting the unrest in Syria, they have begun to add veiled criticisms of the regime’s brutal crackdown, an obvious means of pandering to the street.

What’s more, Iran’s leaders perceive that it is the U.S. position, not theirs, that has weakened in the region. They see U.S. troops withdrawing precipitously from both Iraq and Afghanistan; U.S. relations with Pakistan turning ever more sour; and Arab dictators who have been propped up by America for years under threat or already gone. The brazen nature of the Washington assassination plot supports the idea that Iran sees the U.S. as soft.

Given this perception, Iran is asserting itself. In the past two years, it has eschewed serious engagement with the U.S. on the Iranian nuclear program, Afghanistan or anything else. Rebuffing the U.S. idea of a hot line to avoid conflict in the Persian Gulf, Rear Admiral Habibollah Sayyari, Iran’s navy commander said, “The presence of the U.S. in the Persian Gulf is illegitimate and makes no sense.”

Iran’s goals are to hasten the U.S. withdrawal from Afghanistan and Iraq and fill the void left behind. Iran has increased its outreach to the Taliban and is pushing to complete a project to supply natural gas to Pakistan through a pipeline connecting the two countries. In Iraq, it has supported stepped-up attacks by the Iranian-backed Shiite resistance and is talking about having an expanded role after the Americans leave, for instance by volunteering to train the military. Iran is also exploring diplomatic relations with Egypt, which it has not had in years.

In this U.S. election season, presidential candidates will be tempted to propose strategies to contain Iran’s aspirations. To be seriously effective, such plans would require Arab countries as well as Russia and China, major trading partners of Iran, to sign on to a concerted policy of isolating the country. That’s unlikely to happen, given the Arab world’s preoccupation with Libya and Syria and the eagerness of Russia and China to do business with Iran.

Moreover, if the U.S. confronts Iran directly, it would probably work to the advantage of Iranian leaders, allowing them to divert attention from domestic woes such as inflation, unemployment and the embarrassing alienation between Supreme Leader Ayatollah Ali Khamenei and President Mahmoud Ahmadinejad. The U.S. should not hand them that opportunity.

The alternative is to let Iran’s ambitious regional strategy play out. So far, it hasn’t gone so well. Iran has clashed over Syria with Turkey, which is hosting anti-Assad forces. And Iran’s strained relations with the other big Mideast power, Saudi Arabia, have been tested anew by the Washington plot and by the suspicious assassination in May of a Saudi diplomat in Karachi, Pakistan.

Iran expects greater influence in Iraq and Afghanistan once U.S. troops leave, but with that will come greater burdens. Once absent, America can no longer be the focus of opposition in both places. Instead, Iran may replace the U.S. as the target of popular anger, blamed for the failure of government to meet people’s needs. Iran may prove no more able to pacify Iraq and Afghanistan than the U.S. has been. Iran is adept at causing security headaches in the region but is untested when it comes to resolving them.

Failure on that front would leave Iran, rather than the U.S., in the middle of renewed civil conflict in Iraq or Afghanistan. It also would have direct implications for Iran domestically. Renewed chaos in either country would send refugees flooding into Iran and increase drug trafficking and violence in the border areas.

Iran may come to remember fondly the period when the U.S. military absorbed resentments in the region.

AUTHOR
Vali Nasr is a Bloomberg View columnist and a professor of international politics at the Fletcher School of Law and Diplomacy at Tufts University. The opinions expressed are his own. Contact vali.nasr@tufts.edu.