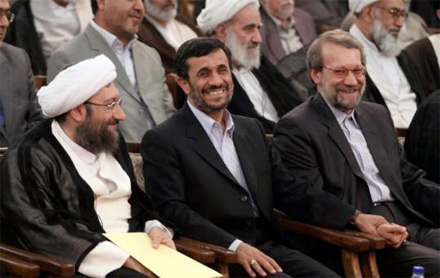 A petition summoning President Ahmadinejad to the Iranian parliament, which appeared all but set to be adopted yesterday, ultimately fell short after a number of lawmakers pulled their support for the measure. While the necessary one-quarter of legislators (73 out of 290) had initially authorized questioning Ahmadinejad, the motion stalled when at least five of them withdrew their signatures at the last minute.

Ahmadinejad’s economy minister, Shamseddin Hosseini, also survived an impeachment vote of his own, 141-93. The two are currently embroiled in an ever-expanding $2.6 billion bank fraud scandal that has begun to threaten the Ahmadinejad administration, though the incumbent president’s removal from office still remains a somewhat distant possibility.

In a rather telling development, Hosseini survived impeachment only after Majlis Speaker Ali Larijani, a fierce critic of Ahmadinejad with his own rumored presidential ambitions, took the peculiar step of addressing lawmakers before the vote and asking them to give the economy minister a second chance, pending an independent investigation by the country’s judiciary. In another twist, Iran’s chief justice happens to be Larijani’s younger brother, Sadegh, who was appointed to the post mere weeks after Ahmadinejad’s highly-contested reelection in 2009.

The Larijani brothers enjoy close relations with Supreme Leader Ali Khamenei, who holds ultimate power in the constitutional framework of the Islamic Republic. In this context, Ali Larijani’s words may well have been directed from the Supreme Leader himself, and it should be remembered that a similar petition to summon Ahmadinejad was circulating last year – also with the requisite number of Majlis signatories – until Khamenei himself called for “unity” in the legislative body, causing the motion to be scrapped.

This time around, however, Khamenei has likely grown to see Ahmadinejad’s continued recalcitrance as an increasing liability. At the same time, he tied his own legitimacy to Ahmadinejad’s by providing him unconditional support and backing throughout the 2009 post-election crisis, despite massive opposition protests and upheaval in the streets.

And so on the one hand, the Supreme Leader has allowed for an impeachment vote against one of Ahmadinejad’s chief ministers to commence in Majlis (headed by Ali Larijani), and has blessed the Judiciary’s ongoing criminal investigation into the banking fraud case (guided by Sadegh Larijani), but on the other hand, has scuttled Hosseini’s imminent impeachment at the last moment and rescued Ahmadinejad from certain embarrassment at the hands of a parliamentary grilling.

Time will tell how events play out, but if Ahmadinejad does not ultimately fall in line and curb his apparent post-presidential ambitions, then Khamenei and the ruling class may have no choice but to follow through on as of yet hollow threats of impeachment. As unlikely as it may appear, the possibility exists that Khamenei’s recent comments about scrapping the presidency in favor of a prime ministership were merely a prelude to the future trajectory of the Islamic Republic. Already on several occasions, through comments from both the clergy and top regime brass, Ahmadinejad has been compared to Abulhassan Banisadr, the first Iranian president who was himself impeached before fleeing to Paris. With the presidency vacant, a constitutional amendment could be ushered through, eliminating the post of president (and avoiding a repeat of the 2009 election by entirely bypassing the voting public in 2013), whereby a prime minister could be neatly elected by Majlis from within its own ranks. Should that come to pass, none other than Ali Larijani would be uniquely placed to assume the figurehead “democratic” mantle of the Iranian state.

For now, the embattled Ahmadinejad will stay put as the regime undoubtedly takes further steps to neutralize and contain him for the remaining months of his presidency. But even as unlikely as the above scenario may presently seem, it would only represent the growing anxiety that Khamenei must currently be feeling. If current political divisions would not be healed with Ahmadinejad’s exit – be it through his impeachment or by constitutional term-limits – such that the elimination of the entire presidency is deemed necessary, then it is doubtful that these divisions actually arise from the actions of one controversial and unreliable executive. More likely, there are deeper, more profound issues at stake. A sanctioned and lagging economy, staggering unemployment and inflation, the type of youth-bulge that has come to embody the face of the Arab spring protests. Indeed, these are all pressing issues – ones that no President, Prime Minister, or Supreme Leader is immune to in these very turbulent times.