Where to Bomb Iran, if needed 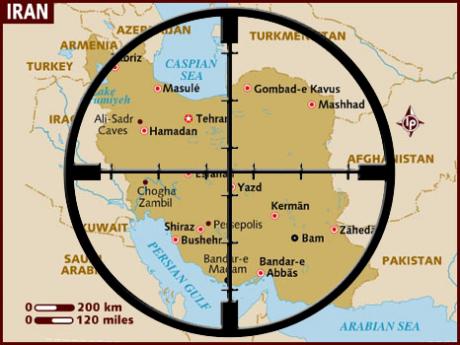 It is utterly foolish to believe, now after 32 years, practically a lifetime, that the Islamic Republic of Iran has the capacity to be reformed. Not only is it not reformable by any serious standards, but it has been going in the opposite direction, becoming more ominous and threatening by the minute. Now they are even talking about invading Europe and North Africa. This is the consequence of marrying religious ideology to affairs of state and politics: By definition: it’s either Allah’s way, or Jihad and hell. There is no in between.

It’s only a metter of time before the messianic mullahs dare and start testing the west’s patience by playing with the lion’s tail. Yes, they are that stupid, and would care less if a war starts. It will bring people on their side, their thinking goes.

Unlike Iraq where Saddam had hidden military infrastructure amidst civilian populations, I think surgical missile strikes would effectively de-fang the Islamic military nezaam of the Mullahs for a decade or two. So, here is a list of possible targets I think would be good places for a UN strike force to take out, should it come down to war of the infidel west against Sepaah-i Islam. Most if not all of these are places low in population, and high in military/financial value:

Aside from Bushehr and a few other sites, the rest of Iran’s nuclear infrastructure is fair game. These are:

These other air military bases should also be decapitated:

Here are a few industrial complexes that are sufficiently large and essential to the Islamic Iran’s economy, and nestled outside large population centers:

It’s time that the world community took action and send back these hand-chopping, whip-lashing mullahs to where they belong: the stone age. A surgical strike will cut off the heads of the monster, and set Iran’s people free from their 30 year shackles. Now it’s Israel they set their sights on, and tomorrow it will be Europe and the rest of the free world. Exporting their revolution never disappeared from the primary objectives. You can hear their “Hokoomat-e Jahani” drivel each time they broadcast their anti-western and “marg bar …” hate speech. The world cant trust these fanatics with sophisticated weaponry.