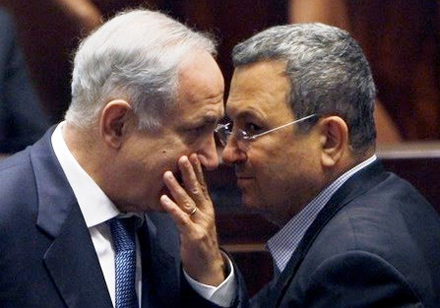 If Iran dares mount a nuclear attack against Israel, Iran will be committing public, painful, mass suicide. Israel will respond, and the world will not be silent. Jerusalem knows that and, more importantly, so does Tehran. But in Tehran, so we are told from morning to evening, the “crazy” leadership could shuffle the deck.

And so Israel is threatening to bomb Tehran before it is too late, and many Israelis are even in favor of doing so. But the debate now underway, with terrifying seriousness, about the possibility of bombing Iran makes one suspect that it is actually here, in Israel, that lunacy prevails. The Iranian lunacy has yet to be proven; in Israel, it is already as plain as day.

Israel does not have rational leadership. Most of its moves cannot be logically explained. It is not logic that dictates continued construction in the territories; it is not logic that explains the war that the government of Israel has declared on the Palestinian Authority, without considering what will come instead. Neither is there logic in Israel’s Hamas-strengthening moves, from the continued siege of Gaza to the release only of Hamas prisoners. There is no logic in continuing to imprison Marwan Barghouti; there is no logic in causing relations with Turkey to deteriorate, and there was no logic in Operation Cast Lead, which damaged Israel much more than it benefited it. There is also no logic in the fearmongering against the Arab Spring, which actually could ensure Israel a few quiet years from countries whose armies have crumbled, whose societies are preoccupied with domestic matters and whose regimes are on the rocks. And, of course, there is no logic in the continued occupation, which endangers Israel more than anything else.

Something else is guiding the Israeli leadership, and it is not called logic. Israeli public opinion also cannot be suspected for a moment of conducting itself rationally: Most Israelis believe that bombing Iran will spark a regional conflagration, and yet more Israelis favor such an attack than are against it. If that is sanity, what is insanity?

There is no way to rationally explain the beating of the drums of war against Iran. The risks of an Israeli attack are clear, and they are horrific. The danger of Iran using a nuclear weapon is nil, and yet Israel is playing with the fires of hell. Israelis, in fact, are saying they prefer a barrage of thousands of missiles – which will bring blood and destruction now – to the future imaginary risk of the suicidal weapon by “crazy” Iran; that they prefer system-wide insanity, with clear threats and open preparations for what could become an Israeli suicide mission.

Even if all the well-orchestrated statements, maneuvers and billowing smoke are only intended as threats, they lack all wisdom. A threatened Iran is also dangerous. It might launch a desperate preemptive strike on Israel.

Iran wants nuclear weapons to protect its regime. It saw former Iraqi leader Saddam Hussein and Libya’s Muammar Gadhafi bombed and it understands – very logically, it should be said – that if it possessed a nuclear option, the world would not touch it, as it touches neither North Korea nor Pakistan. Iran also wants to be a regional power in the new Middle East, and it knows that one way of doing so is by means of centrifuges. It would be preferable, of course, if it did not get its wish, preferable that the world exert pressure so that it does not attain nuclear arms, but it is clear to all that no bombing will keep them from Iran forever.

The only conclusion from all of the above is that there is an illogical leadership in the Middle East, but it is not necessarily in Tehran. Fear, partly false fear, dwells in Jerusalem, the outcome of the fearmongering and demonization that is always present here, regarding everything from swine flu to the Iranian nuclear program. Alongside it is the megalomania that says that Israel can call the shots in the region as it sees fit. The mens’ men who are threatening Iran now are the real cowards’ cowards. The brave ones are in fact those who are trying to thwart the insanity, from former Mossad chief Meir Dagan to Interior Minister Eli Yishai.

AUTHOR
Gideon Levy is a Haaretz columnist and a member of the newspaper’s editorial board. Levy was the recipient of the Euro-Med Journalist Prize for 2008; the Leipzig Freedom Prize in 2001; the Israeli Journalists’ Union Prize in 1997; and The Association of Human Rights in Israel Award for 1996. His new book, The Punishment of Gaza, has just been published by Verso Publishing House in London and New York.