You Can Stop Iran War 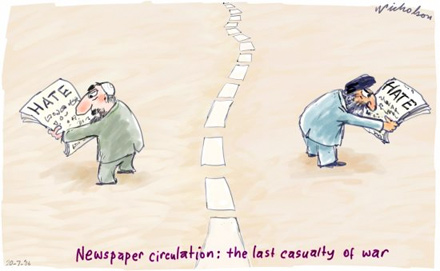 Regrettably those that orchestrated this most recent anti-Iran campaign largely achieved their objective, which was to further demonize Iran, increase support for harsher sanctions, and lay the groundwork for military action.

Most Iranians reading the corporate media of the past several months most likely became very anxious and concerned about the increased chances of war breaking out.

But if one dug deeper and turned to alternative sources of news and commentary the outlines of an orchestrated campaign begins to emerge. Below I will provide links to these sites.

If you bother to visit them you should be able to discover for yourself how different things are to what the mainstream media is reporting.

With GOP presidential candidates attempting to out-do each other in their Iran bashing and some regional American newspapers reporting that Iran has a nuclear weapon, the fuse has been lit.

Soon lies will reinforce bigger lies and allegations will turn into solid evidence and the momentum towards war with Iran will take on a life of its own.

No matter how many millions take to the streets in protest they will not be able to stop the war makers.

When Americans whine and complain about the billions and trillions spent on the Iraq and Afghanistan wars it needs to be asked; “Where did that money go?”.

The answer to that should be easy to find by simply looking over the financial reports of the “defense industry” for the past ten years.

Essentially American taxpayers transferred their wealth over to corporations making drones, bombs, warplanes, uniforms, bullets, and all the other corporations that are doing war business in Iraq, Afghanistan, and the other countries in the region.

As we all know America is winding down its military “activity” in the Middle East.

What does this mean?

It means those billions of dollars that were flowing into the coffers of the military industrial complex over the past ten years has radically decreased.

So what better way to re-open the spigots of cash by starting a war with Iran while also scaring the Sunni’s to spend their oil money on sophisticated armaments that they don’t’ have a clue how to use.

The “plot” to assassinate the Saudi ambassador, the false and misleading hype prior to the release of the IAEI report, the “leaks” that Israel was about to bomb Iran’s nuclear sites, all point to a CIA-Mossad collaboration, which have as their primary mission to protect America’s vital national security interests. And at the top of this list are cheap oil and their biggest military outpost, Israel.

What is revealing about all this is that they went into all this trouble simply because they know they can’t take military action against Iran.

And they can’t take military action because the escalating retaliations will most definitely mean oil prices over $200 a barrel and the likelihood of a regional war that may last for decades that could go nuclear.

Unfortunately the response by Iranian officials over the past several months has only reflected the continuing disarray in Iran’s leadership and the usual ignorance of the workings of Washington.

A thirty-year-old Iranian friend that is a seyed and a former Basij asked me what I thought about Iran’s reaction to all of this and I said, “Neshestan to ye boshke va az sedaye khodeshon ke mipiche khosheshoon miyaad.” .

Any Iranian official responsible to report to decision makers on what is happening in Washington and the Middle East and is not reading what is written on these sites, and passing on a Farsi translating, is failing in his or her duties.

Witnessing all this from Iran is to say the least very stomach churning because it’s clear so called “leaders”, here and aboard, are just muddling through, don’t have sufficient information, not getting un-biased advice, reading newspapers that provide distorted manipulative misinformation, and therefore could end up making decisions that may result in the death of thousands, if not millions, of Iranian men, women and children.

Given this situation it would be easy to throw ones arms in the air and claim there is nothing that can be done. Wrong. You can do something. Get informed. Pass on what you have learnt. Use the freedoms provided in America to lobby. Contact your congressman. Open their eyes.

If the MEK can hire warmongers to spew anti-Iran nonsense then you can line up anti-war speakers. Get organized. Fundraise. Get informed.

Because if you sit back and do nothing, and stay uninformed, these warmongers will get their war and you will never forgive yourself.

Here is list of sites that are doing their part: