Heading to a new war 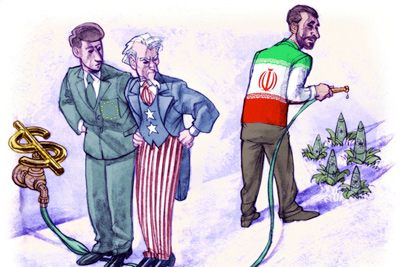 Mohssen Massarrat and Bahman Nirumand’s open letter to the Parliamentary Group of the German Green Party in view of the Press Release (dd. 9 November 2011) released by its Foreign Policy Spokeswoman Kerstin Müller on the most recent IAEA Report on Iran. Translated by Ali Fathollah-Nejad.

It is highly alienating that the Green Party’s Parliamentary Group has in the current conflict over Iran’s nuclear program and Israel’s threats of a military strike taken a clear partisan stance. We are unconditionally of the opinion that any new nuclear weapons state will be one too much, and that a nuclear bomb in the hands of Iran’s political leadership would aggravate the arms race in the Middle East and accelerate its long-standing destabilization. However, anyone who ignores the nuclear weapons arsenal in the hands of a state that since its foundation has waged several wars upon its neighboring countries and that until now has failed to abide by the international request to cease the occupation of Palestine, is blind in one eye. And anyone who, like the Green Party’s Parliamentary Group, limits itself to the desire of preventing Iranian nuclear weapons, is not only advocating that Israel as the only country of the region retains its nuclear weapons monopoly, but also becomes ultimately responsible for the proliferation of nuclear weapons in the region and beyond. And anyone who, like [Israeli Prime Minister Benjamin] Netanyahu and [Foreign Minister Avigdor] Lieberman, believes that people in Israel can be granted more security through military power and nuclear weapons, in fact jeopardizes the most the security of Israel’s population. If the Green Party’s Parliamentary Group was really interested in the existence of Israel and in a peaceful coexistence of all peoples in the Middle East, it would have to champion a regional zone free of weapons of mass destruction and the idea of cooperation in the Middle East, and it would have to urge all regional states, including Iran and Israel, to play a constructive and active part towards such a prospect for peace. This is where the Green Party’s Parliamentary Group ought to follow the example of some few prudent voices from Israel (see e.g. Hillel Schenker’s op-ed in Haaretz on 11 November 2011).

Moreover, the statement by the Green Party’s Parliamentary Group lacks any notion of objectivity and reasoning that one would truly expect from a party in the German Bundestag. It uncritically adopts the assertions made in a propagandistically inflated International Atomic Energy Agency (IAEA) report whose credibility is highly questionable:

* Already prior to its publication, the IAEA report has been compromised by the fact that a non-member state (lsrael) by pointing to the same report threatened an IAEA member-state (Iran) with war.

* Though the IAEA report is indeed more comprehensive than ever before, it is not more precise. It fails to provide concrete information on the question of whether Iran currently or in the future is having the capability to build a nuclear bomb. Since over ten years now we are hearing the “news” that Iran will possess a nuclear bomb in half a year’s time.

* For the most part, the report is essentially based on information provided by intelligence services from ten countries. Yet a key question is why the names of those countries are not listed in the report? Such omission begs the question of whether the IAEA wanted to avoid mentioning Israel (not only a non-member state, but also itself party to the conflict) as a potential source of information, which in fact would have put the Agency in a bad light.

Despite these credibility gaps, the statement by the Green Party’s Parliamentary Group does not provide even a single sign of reflection, something so imperative precisely in a conflict with potentially war-like consequences. Didn’t already once information provided by intelligence services convey a justification for the war on Iraq by a certain George W. Bush? Has the Green Party’s Parliamentary Group already forgotten how then U.S. Secretary of State Colin Powell apologized to the world for his lies to the UN Security Council after he had received information from some intelligence services? Is an Iraq War not enough in the Middle East? In order to draw lessons from history must we add an Iran War? It is downright grotesque that a party, who has originally drawn its legitimacy from the peace movement, must now be reminded of the propagandistic mechanisms when it comes to justifying yet another war.

The warnings by the Green Party’s Parliamentary Group directed towards Israel’s government about the “catastrophic consequences of a war” become void, if at the same time even harsher sanctions on Iran are called upon, whose only purpose is to cause even more harm to the Iranian people and to pave the way for war. Let us recall: The harshest sanctions against Saddam Hussein’s regime in the 1990s were followed by war. The harder sanctions on Iran become, the longer the lifespan of the anti-democratic system there. Thereby a welcome justification is provided to those holding power in Iran to divert attention from their own corruption and mismanagement, which have ruined the country, and to present themselves – as Saddam Hussein did during the decade-long sanctions regime – as saviors of a stranded nation. As such, the system of the Islamic Republic of Iran can procure itself with a legitimacy it has in fact long lost. One would be well-advised to finally put a halt to a policy of double standards. Otherwise one is consciously or unconsciously crafting a policy that inevitably leads to a new war in the Middle East – this time on Iran –, which would unleash a conflagration in the entire region, including Israel.

* Professor emeritus for global politics and economics, peace and conflict researcher, University of Osnabrück (Germany). For many years, he served as an ombudsman for the Heinrich Böll Foundation, a public education think-tank affiliated to the German Green Party. Author of more than 20 books, he has most recently spearheaded the civil-society initiative for a Conference for Security and Cooperation in the Middle East (CSCME). Website: http://mohssenmassarrat.weebly.com/.

** Writer and author of the widely read “Iran-Report”, a monthly account on Iranian domestic and international affairs, published by the Heinrich Böll Foundation. A book he published in 1967 (later translated into English with the title Iran: The New Imperialism in Action, with an afterword by Hans-Magnus Enzensberger, New York: Monthly Review Press, 1969) contributed majorly to the internationalization of the German student revolts of that time. More recently, he is the author of Iran: Die drohende Katastrophe [Iran: The Looming Catastrophe], Cologne (Germany): Kiepenheuer & Witsch, 2006.