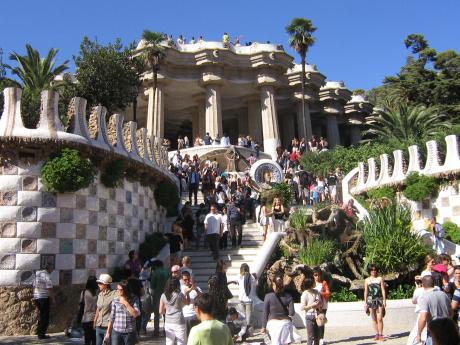 I am now in Barcelona. I am long passed that stage of being an official tourist and acting it too. I visited a few places and that was it. The rest of the time I sit in cafes, stroll aimlessly in the city and observe life. That is the thing about some countries or cultures or just being a visitor: I don’t have to participate in life. I walk about with dreaming eyes of wonder and I think, why do people rush so much? Do they know how lovely that terrace with hanging flowers is?

As I go through various neighbourhoods, I am reminded of Tehran, Shiraz, and Bandar Abbas. There are the obvious indicators: palm trees, dates, apartments, and boulevards. Perhaps the most significant one is the sensation of warm weather wrapping itself around me without being intrusive. Weather is no longer my enemy as it has been for years in Canada. Suddenly, an extra parameter with its huge weight is taken of the complicated equation of life. And that makes all the difference. It is most likely one of the reasons why people seem much calmer, much more relaxed than those in Canada or Germany.

Yesterday, I visited Montserrat (the black Madonna), a monastery in a mountainous area. When we arrived, they were singing Gregorian chants, but it was not particularly impressive. Unfortunately, I cannot place the photos to share with you.

Then we went to a village (Mon Sant Benet) where we watched human towers and stick dance performed by two different groups of artists. People got together leaning forward with arms raised toward a single point in the air. This formed the base for the tower. Then a group of four to five people, younger and smaller than those in the first one, climbed and stood on the shoulders of those in the base. Now this became the support for the third ‘storey’ and so forth. The age and size of those involved were inversely proportional to the height of the tower. Those high up, the tallest we observed was seven a seven-storey-tower, were very young but well-trained and fit children who climbed up others comfortably and slid down without difficulty when the tower was to be deconstructed.

Everyone could participate in the tower: young, old, disabled, tall, short, … The philosophy was that everyone is essential while no one was indispensable: an inclusive view of humanity.

Stick dancers’ part was also very interesting. An old art form that had shown remarkable flexibility in adjusting itself with the times. It used to be exclusive to men, but now both male and female dancers could participate. So far I have seen stick dancing from Iran, India, Lebanon, and Spain. I imagine it must be common in many other places in the world.

In Barcelona and Granada, people were very well-dressed, especially the older generation, who always seemed well-groomed with attention to style and colour in the most graceful way. I didn’t come across any tattooed eyebrows, overly lifted faces, or excessive make-up. People seemed to be in harmony with their ages. They didn’t try to look young, just good. And that made them adorable to look at.

Walking in Barcelona, I came across narrow alleys lined with shops sometimes bearing Middle Eastern or South Asian names and contents. These seem to be not-so-prosperous neighbourhoods. There were cafes and bars, like everywhere else, but the ambiance was different. Old people sat in cafes drinking coffee, sometimes all alone, other times in company of often another old person. They were well-dressed sitting on benches facing sidewalks -not the street- they sat for hours and watched life passing.

In Park Guell, another one of Gaudi’s amazing work, I noticed peddlers selling magnets, bracelets, fans on pieces of fabric spread on the ground. Suddenly, a young man scurried down the stairs (the park is multi-level) and ran toward the first peddler in the row and whispered something in his ear. He leaped up and gathered his goods in a manner of few seconds. The tipping-off wave traveled through the line at the speed of light; they cleared the whole area in a flash.

I had seen similar scenes in Shiraz behind the old municipality. Peddlers selling their goods in constant fear of authorities who descended upon them yelling and cursing any time they pleased. The poor seem to live similar lives all over the world. I wonder how similar the rich’s lives are in different countries.

The transit system was quite efficient and cheap; there were over ten lines of subway and a of buses for a city of 3,000,000 population. There were eight universities, four of which were publicly funded. The effects of falling economy were visible. Any time we could talk to people, not many spoke English, there was complaint about loss of jobs, businesses, etc. There was no shortage of exhausted, sleepy faces on the late night train or the desperate young Africans with crumpled sacs of purses for sale in subway stations, but generally people were in fairly good spirit. My friends had complained about the Spanish being bad tempered and rude, but I never had an unpleasant encounter. Despite language barrier, they did their best to communicate and to help.

Food and fruits and vegetables were quite cheap though they hardly went together. If you are into fruits and vegetables, just buy them at a shop because they are rarely served in restaurants. I bought some grapes, eight persimmons, some tomatoes, seven figs, and a few tangerines, guess for how much? For less than two Euros! In Canada, I can barely buy one fig for that much money. Never with that quality of course. So I ate as much figs and persimmons as I could. What they lack in fruits, they compensate with ice cream: if you are into that, Barcelona (and probably the whole of Spain) is the place to go. I tried one with mascarpone and fresh figs (yes, I am obsessed with figs), and it was most amazing. The shopkeeper made it into a rose on a cone; I had to convince myself to destroy the artistry and eat it before it melted.

But there is much more to Barcelona than all of this. And I think that is the spirit in the city; it has to be Gaudi and the general sense of a people who value art and beauty. And the weather treats them gently: the result is a pervading sense of calm and benevolent confidence -a city that has it all thus bears no fear of sharing.