How Useful Are Iranian Know-It-Alls And Their Advice? Part 6 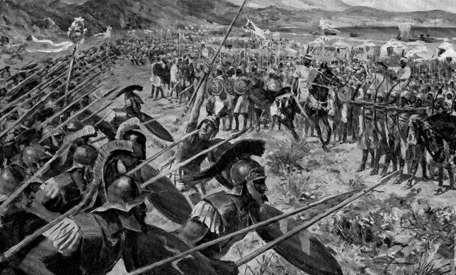 The only reason I’m still here and writing on Iranian.com is that I consistently refused to back down or be intimidated when people objected to what I was writing. Through sheer persistence, I got some people to reluctantly pay attention.

Its not because Iranians are so tolerant. Its that they can’t shut me up, and eventually give up when they realize I’m not going away and am going to tell the truth as I see it, regardless of what they think.

The negative reactions I’ve encountered on Iranian.com are not the only occasions where Iranians have shown a dislike for an open discussion that they couldn’t control.

My father – who is Iranian – urged me not to study history, because (according to his know-it-all Iranian self) there was no money in it.

In other words, according to him, historical research – the aim of which is to discover the truth – is only good if it makes money.

As I mentioned, my father is Iranian. Iranians don’t tend to value the truth for its own sake, but see things like the study of history as subordinate to some goal; making money, or looking good in some other way (both of which are naturally interconnected in the reputation-obsessed Iranian mind).

Its very important to be goal-oriented among Iranians; to know what you want, and for that to dictate EVERYTHING you do.

Nothing is any use unless it helps you get to some conclusion or goal. If it doesn’t serve the purpose of reaching your goal, it is useless and you shouldn’t spend time on it.

For example, the truth.

Iranians appear to occasionally regard the truth as something of an obstacle, in their hurry to get somewhere in life – the destination usually being a stage somewhere where they can look good in front of others, or a money-making machine like a respectable profession.

A classic example of this attitude is found in the way they treat their own history.

Over two thousand years ago, Iran was conquered by the Greeks.

I am no expert on this, and am still full of questions. How did the Greeks manage to conquer such a relatively huge empire as the Persian Empire?

How did they manage to defeat an army that was probably much larger than their own?

The genius needed to do such a thing – i.e. Alexander the Great’s – is probably widely comprehended and understood by anyone with a serious interest in historic knowledge for its own sake.

It is not apparently comprehended by Iranians, however. Persian pride – that same futile inspiration that keeps them from acknowledging their shortcomings as a nation and people – prevents such a thing from happening.

In general at least, Iranians don’t openly admit that they got their asses kicked fair and square by a smaller state with a smaller army.

Iranians are still pissed about it, two thousand years later!

That of course is the whole reason why they can’t admit it.

The issue for Iranians is that they got their asses kicked. That the Persians invaded Greek territory first, entered Athens and then burned the Acropolis isn’t the issue.

The only problem is that it MAKES THEM LOOK BAD – and how they look is all they are concerned about. As usual, the truth gets swept under the two thousand year old Persian carpet.

And so it was that I never learned about the genius of Alexander the Great from any Iranian.

Truth-loving Persians do not dwell upon

The trivial skirmish fought near Marathon

When I raised the subject of these battles with Iranians inside of Iran, they always came up with a way to spin these battles into some sort of irrelevancy where they could safely not reflect badly on Iranians.

“The Iranian king chained his soldiers together”, was what one know-it-all Iranian medical student told me. He painted a vision for me of a battle in which hapless Persian soldiers were conveniently chained together just so that the Greeks could defeat them. No rational explanation was ever given for this supposed situation, and I couldn’t come up with any either.

I neglected to ask him if the supposedly chained Persian soldiers even had weapons, while I pondered.

My Iranian literature teacher bristled when I pointed out Alexander the Great’s genius, and sternly informed me that Alexander the Great was the first one to legalize and promote homosexuality in Iran, and to make it officially acceptable as a practice.

And that was that. End of discussion about his military career.

… an old, slightly different twist on the policy of “don’t ask, don’t tell”.

A close friend of mine had an obvious rise in blood pressure when I spoke with appreciation about how remarkable it was that Alexander the Great and the Greeks defeated the huge Persian Empire.

His eyes shone with anger, as he protested!

He tried to shift focus away from this inconvenient defeat, towards one supposed battle where Alexander’s forces took heavy casualties and were allegedly defeated (I never learned any details of that supposedly all-important but conveniently obscure battle from him, but my guess is that this might have been the Battle of the Persian Gate).

And my father? I never heard anything about the matter from him, except about the terrible destruction of Perspolis.

Yes, I know the Greeks ruined it. The ruins of Perspolis do eventually tend to give one the idea that Perspolis was ruined.

But how did they manage to capture it? Maps show that the Greeks must have kicked Persian asses across a great distance, to have reached it.

… we never quite got around to that uncomfortable subject.

I’ve waited in vain all my life to hear one Iranian explain it.

So at every opportunity, Iranians had some way of avoiding acknowledging that Alexander the Great was a military genius, or that the Persians sucked and that’s why they were defeated.

I could not get them to talk about just how the Greeks managed to defeat their larger Persian enemy, or to even permit the focus of the topic to remain on Alexander’s military prowess.

Not a single Iranian was willing to consider Alexander the Great’s talents or capabilities vs. their own!

His conquest was simply an unfortunate event like a natural phenomenon – say, a hurricane – that struck Iran.

People who make up crap about Islam being the source of lying in the Middle East (the “Taghiyeh” myth) need to shut up and study this.

Islam does no such thing as promote lying, of course. But whatever tool is handy to help Iranians avoid criticism and deflect it onto something else, will do. The Iranians who cling most passionately to pre-Islamic Iran aren’t the religious Muslims. The Iranians who bristle at the mention of Alexander the Great aren’t doing it out of Islamic conviction. Islam might be their current favorite excuse for current Iranian failures, but they can’t blame it for that one.

Long story short, I did not learn from Iranians anything about the history of their conflict with Greece, or about why they got their asses kicked by Alexander the Great.

I failed to learn from Iranians about an important conflict from one of the main chapters of their own history. They have trouble even talking about it, or acknowledging some key aspects about it, such as getting their asses kicked, and having started it.

Not if you are supposed to take the pronouncements of Iranian know-it-alls seriously.

… i.e. so seriously as to make life-changing decisions based on them.