Wonders of the World: Ironically the legacy of despotic emperors 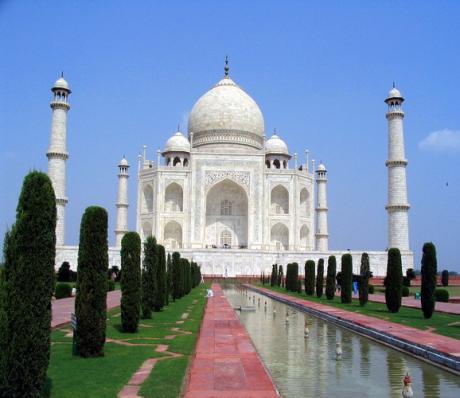 Iqbal Latif: Emperors who had unbridled power created the most stunning buildings and monuments of the world. The Sphinx and The Great Wall of China are products of despotic rules;First emperor of China, Ch’in Shih Huang Ti built the Great Wall of China. He built the Great Wall because he was frightened of the “the barbarians” attacking him from the north. The Great Wall is often called “the longest cemetery in the world.” It got that name because so many thousands of workers died beneath the huge gray stones. Ch’in Shih Huang Ti slept in a different palace every night, he was sure his enemies would try to kill him if they knew where he would spend the night.

Haussmannian boulevards of Paris are the conception of Napoleonic decrees. Elected president of the Republic of France in 1848, Napoléon III became emperor on 2 December 1852. Under his new rank, Napoléon III decided to modernize Paris after seeing London, a city transformed by the Industrial Revolution, which offered large public parks and a complete sewer system. Inspired by Rambuteau’s ideas, and aware of social issues, he wished to improve the housing conditions of the lower class; in some neighbourhoods, the population density reached numbers of 100,000 people/km2 (250,000 people/sq. mile) in conditions of very poor sanitation. The goal was also for public authority to better control a capital where several regimes had been overthrown since 1789. Some real-estate owners demanded large, straight avenues to help troops manoeuvre.

It seems that within the evil of despotism paradoxically lies the good of the general and commons; the world heritage would have been poorer without these despots.The most beautiful and incredible gift of love is the monument Taj Mahal in India. Built by Emperor Shahjahan as a memorial to his wife it stands as the emblem of the eternal love story. Work on the Taj Mahal began in 1634 and continued for almost 22 years and required the labor of 20,000 slave and forced labours from all over India and Central Asia.

It is ironic that we infrequently bear in mind the blood and tears of those who build these monuments. Take the example of Taj Mahal: for the untold thousands who laboured on it, Emperor Shah Jahan didn’t even have the magnanimity to dedicate the Taj Mahal to, say, “all the lovers of Hindustan,” or something similarly inclusive.

The poet Sahir Ludhianvi, speaking for the masses, famously said of the Taj:

If you let democracy (the way democracy as it is envisioned today by the so-called “intellectuals” at universities– see below) take over the lowest common denominator wins; food, sex, alcohol, and drugs on welfare. All entitlements and demands. Nobody to do the work. Eventually after breakdown people start wishing and longing for a strongman and voila.

It cycles. Napoleon took over after the degeneration of the revolution. Stalin took over after years of chaos and killing. Hitler took over because of hyperinflation, feelings of having been cheated and humiliated.

What we have is not democracy; it is more like demogoguery. Illiterate people at the universities bribe the population and rile up the illiterate masses to vote in strange directions.

We will never have the kind of system where people are like molecules of water– all indistinguishable– creating some “mythical” (and totally incoherent and undefined mystical “equality”). All living systems (e.g. organisms) are hierarchical; they are comprised of organs. One organ rules the organism. If societies are like organisms, it should be clear that societies are not like buckets of water or containers of air (where the constituent parts are “equal”.)

It’s time to halt the demogoguery (where tens of millions of people are learning to read, write, and give speeches); and start teaching reality.

MH – ‎@Hitler took over because of hyperinflation, feelings of having been cheated and humiliated.

I agree but I find the cancer of societies is deep rooted amongst their philosophers.

German Protestantism, well organized universities and a Jewish citizenry devoted to German high culture all played their role. How all that ended in Hitler is one of the questions of historiography. Hitler did not appear in vacuum; nations’ philosophers are responsible for the decay. G. W. F. Hegel (1770-1831) who occupied an important position in the intellectual life of the 19thcentury; the philosophical thought of Arthur Schopenhauer (1788-1860); H. von Treitschke (1834-96) who was a vigorous spokesman for German political aspirations. The thinker who exerted the greatest influence of this period was Friedrich Nietzsche (1844-1900). He had been a disciple of Schopenhauer and a friend of Wagner; but he developed his own theory of “superman,” which was his special contribution to German aspirations. This thesis was chronicled in “Also Sprach Zarathustra,” his masterpiece. His was a call to self-assertion, to dominance through the will-to-power.

FORMATION OF THE GERMANIC SOUL – The founder of the modern racialist school, of the teachings to which the Germans have given practical effect, was a Frenchman, Count Arthur de Gobineau (1816-1882). His most influential book was “The Inequality of Human Races.” Adolf Hitler always declared of National Socialism that “it is even more than a religion; it is the will to make mankind anew.” In “The Testament of Adolf Hitler” (1951) we find the words: “National Socialism is essentially a religious movement and faith. The Germanic or Aryan world of ideas, both political and religious, will go out as a sacred Gospel to heal mankind.”

Houston Stewart Chamberlain wrote at the end of the last century: “In the want of a true religion that has sprung from, and is compatible with, our own individuality, I see the greatest danger for the future of the Teuton. . . . A race so profoundly and inwardly religious (as the Teutons) is unknown to history. . . . The German stands apart and waits for a God to descend once more from heaven.” Fichte, the German philosopher, had said in the previous century that one day the world would be healed by the German spirit.

“The God has indeed come down from heaven, and his Name is Adolf Hitler. His Spirit, eternal and triumphant, marches on with and leads his disciples and followers throughout the world, in judgment and destruction of the old order, and in inspiration towards the building of the new world system.”

Political Islam faces a similar challenge from the confused philosophical demagogues of the present society.

Progressives on both sides of the Atlantic believed inferiority of certain peoples and superiority of others. It came from both Darwin and Spencer. Of course Nietzsche had a hand in it (Thus Spoke Zarathustra). It was about a fantasy version of evolution.

I would also agree that much of this degeneration came from philosophers.

BTW, today most people in arts etc remember only those monuments and think they are magnificent. If Obama today decided to carve the Rockies to create some fantastic monuments for future generations, the same artists would start screaming bloody murder because they would want to money to be either given to them (support the arts) or given to the poor in the slums.

Do they remember the Romans, who did a lot for the masses or the Greeks who gave a lot of speeches?

Do they applaud China for having produced massive amounts of housing, and sufficient food (instead of mass starvation of Mao’s days) or do they start screaming about “human rights”. The Leftirati were nowhere to be heard when the USSR was having its heyday; they were all suppressing news of large scale famines and were supporting the USSR. Do they remember the massive housing (so called “Stalinist architectures”) or do they hate them because they do not look artsy (no Picasso, no Dali, nowhere to hang the beads…)

IL- Every few years the revolution seekers in the crescent Islam roar and deliver a mouse like revolution; the net result of 33 years of post revolution is that pathetic Ahmeidnajad has replaced the despotic Shah ultimately; Nasser republic to uproot King Farooq resulted in Nasserite-Sadat-Mubarak dynasty of despots. The least of democratic are loudest of the Republics from Jumboriya Libya to Republic of Egypt.

The most totalitarian of states have the most beautiful of the avenues named as `Constitution Avenues; where freedom is a sparse measure Freedom Squares are common.

Hypocrisy and double standards are part of this cat and mouse game of freedom and democracy; lot of systems need to be abrogated; lot of entrenched behaviours that are legitimised as inscribed by the will of Allah will have to re-thought for a renaissance to unfurl its banners across the crescent of Islam.

The strong role of religion in a society will only result in more chains with new revolutions.