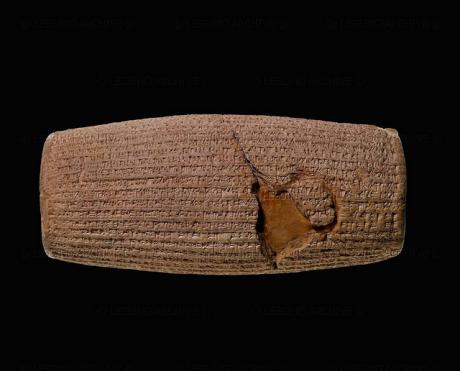 Barry Marston speaks about the importance of Cyrus the Great’s Human Rights Charter. Martson is spokesman for the British Foreign Office, in London with speciality in Middle Eastern issues.

Shah of Iran’s Speech in Tribute to Cyrus the Great’s Legacy:

The Cylinder gained new prominence in the late 1960s when the last Shah of Iran called it “the world’s first charter of human rights”.The cylinder was a key symbol of the Shah’s political ideology and is still regarded by some commentators as a charter of human rights, despite the disagreement of some historians and scholars.

Magna Carta is an English charter, originally issued in the year 1215, and reissued later in the 13th century in modified versions that omit certain temporary provisions, including the most direct challenges to the monarch’s authority. The charter first passed into law in 1225. The 1297 version, with the long title (originally in Latin) The Great Charter of the Liberties of England, and of the Liberties of the Forest, still remains on the statute books of England and Wales. The 1215 Charter required King John of England to proclaim certain liberties, and accept that his will was not arbitrary, for example by explicitly accepting that no “freeman” (in the sense of non-serf) could be punished except through the law of the land, a right which is still in existence today. Magna Carta was the first document forced onto an English King by a group of his subjects (the barons) in an attempt to limit his powers by law and protect their privileges. It was preceded and directly influenced by the 1100 Charter of Liberties, when King Henry I had specified particular areas where his powers would be limited. Despite its recognised importance, by the second half of the 19th century nearly all of its clauses had been repealed in their original form.

by Darius KADIVAR ( A Screenplay by Ren. A HAKIM)

WE ARE AWAKE: Manoto TV Documentary on the 1971 Persepolis Celebrations