Iranian contributions to civilization of man! 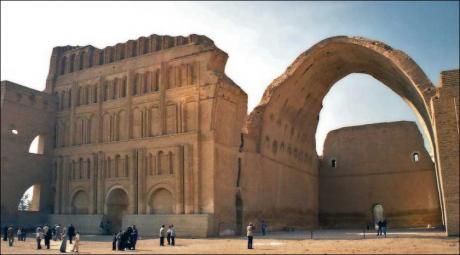 Iranian contributions to civilization of man

With us ther was a Doctour of Phisyk
In al this world ne was ther noon him lyk
To speke of phisik and surgerye, . . .
Wel knew he the olde Esculapius,
And Deiscorides, and eek Rufus,
Old Ypocras, Haly, and Galien,
Serapion, Razis, and Avicen

I have started with Geoffrey Chaucer who wrote in his prologue to the Canterbury Tales, and named the great physicians of the past that his 14th-century audience could be expected to recognize Esculapius, Deiscorides, Rufus, Old Ypocras, Haly, and Galien. Chaucer then goes on to name physicians from the medieval world of Middle East Ibn Sarabiyun or Serapion; `Razis’ the great clinician of the early 10th century; `Avicen’, or Avicenna referring to Ibn Sina whose early 11th-century medical encyclopedia was as important in Europe as it was in the Middle East.

And this is one reason why ‘Great civilisations’ should not be subject to ruthless obliteration or bombed they are rich part of our human heritage! You don’t kill a man who has cancer you take the cancer out, the cancerous growth of dogma under mullahcracy is one problem but to address it by bombing Iran is absurd.Âbâd bâd Iran va shad bâd Irani!

Ibn Khaldun emphasized the crucial role of the Iranians in promoting learning, sciences, arts, architecture, and medicine in Islamic civilization. According to Dr. Kaveh Farrokh ‘It was pan-Arabists such as Sami Shawkat who insisted that history books such as those by Ibn Khaldun be destroyed or re-written to remove all references of Iranian contributions to Islamic civilization. The former Baathist regime in Iraq promoted such policies and even worked alongside numerous lobbies to promote historical revisionism at the international level.’ He writes in The Muqaddimah Translated by F. Rosenthal (III, pp. 311-15, 271-4 [Arabic]; R.N. Frye (p.91):

“… It is a remarkable fact that, with few exceptions, most Muslim scholars…in the intellectual sciences have been non-Arabs…thus the founders of grammar were Sibawaih and after him, al-Farisi and Az-Zajjaj. All of them were of Persian descent…they invented rules of (Arabic) grammar…great jurists were Persians… only the Persians engaged in the task of preserving knowledge and writing systematic scholarly works. Thus the truth of the statement of the prophet becomes apparent, ‘If learning were suspended in the highest parts of heaven the Persians would attain it” … The intellectual sciences were also the preserve of the Persians, left alone by the Arabs, who did not cultivate them…as was the case with all crafts…This situation continued in the cities as long as the Persians and Persian countries, Iraq, Khorasan and Transoxiana (modern Central Asia), retained their sedentary culture.”

Dr. Kaveh Farrokh says that ‘Iraq’ actually means. ‘Iraq’ is derived from Middle Persian or dialectical Pahlavi; it means ‘the lowlands’, like the Germanic term “Niederland” for modern day Holland. There is a region in Iran today which shares the same Pahlavi root as ‘Iraq’ – modern day Arak. The term ‘Baghdad’ is also of Iranian origin – “Boghu” (God) + “dad”(provided by, given by, bestowed by) – “Baghdad” is rough Iranian equivalent of the term “Godiva“. The remains of the capital of the Sassanian Empire, Ctesiphon, stand only 40 kilometers from modern Baghdad. If you have a look at the remains of the Archway of Khosrow located just forty kilometers from Baghdad in Iraq. The term “Baghdad” is old Persian for “Bestowed by God” or “Godiva”.

A hospital was called a bimaristan, often contracted to maristan, from the Persian word bimar, `ill person’, and stan, `place.’The earliest documented hospital established by a ruler was built in the 9th century in Baghdad probably by the vizier to the caliph Harun al-Rashid. There is no evidence to associate the construction of the earliest hospital with any of the Christian physicians from Gondeshapur in southwest Iran, but the prominence of the Bakhtishu` family as court physicians would suggest that they also played an important role in the function of the first hospital in Baghdad.

Verses upon the death in Baghdad of the physician Yuhanna ibn Masawayh in 857 (243 H):

The physician, with his medical art and his drugs,
Cannot avert a summons that has come,
What ails the physician that he dies of the disease
That he would have cured in time gone by?
There died alike he who administered the drug and he who took it,
And he who imported and sold the drug, and he who bought it.

Latin translations of these practices provided late medieval Europe with ideas and practices from which early modern medicine eventually arose from Greek medical teaching and medical literature of the 9th to 12th century professionally practiced by `Razis’ and Ibn Sina .

Iranian scholars of the Islamic era are: Zakaria Razi “Rhazes” (860- 923 or 932, born in Rayy, near Tehran), Abu Ali Sina “Avecenna” (980 -1037, born in Afshana, near Bukhara, ancient Samanid Capital), Abu Rayhan Biruni (973 – 1043, born in Khiva, Ancient Khwarazm now modern Afghanistan), Omar Khayyam (1044-1123, born in Nishabur, Khorasan), Mohammad Khwarazmi (d. 844, born in Khiva, Ancient Khwarazm, now in Modern Afghanistan). Not a single one of these scientists hailed from an Arab-speaking region, all were born in what is now Iran or the former realms of Persian speaking world. (source:wiki)

One of the greatest names in medieval medicine is that of Abu Bakr Muhammad ibn Zakariya’ al-Razi, who was born in the Iranian City of Rayy in 865 (251 H) and died in the same town about 925 (312 H).

The most sought after of all his compositions was The Comprehensive Book on Medicine (Kitab al-Hawi fi al-tibb) — a large private notebook or commonplace book into which he placed extracts from earlier authors regarding diseases and therapy and also recorded clinical cases of his own experience.

Following al-Razi’s death, Ibn al-`Amid, a statesman and scholar appointed vizier to the Persian ruler Rukn al-Dawlah in 939 (327 H), happened to be in the town of Rayy and purchased from al-Razi’s sister the notes comprising the Hawi, or Comprehensive Book. He then arranged for the pupils of al-Razi to put the notes in order and make them available.

`Ali ibn al-`Abbas al-Majusi (d. 994/384 H) was born into a Zoroastrian family from the Iranian city of Ahwaz about the time of al-Razi’s death. Al-Majusi practiced medicine in Baghdad and served as physician to the ruler `Adud al-Dawlah, founder of the `Adudi hospital in Baghdad. It was to him that al-Majusi dedicated his only treatise, The Complete Book of the Medical Art (Kitab Kamil al-sina`ah al-tibbiyah), also called The Royal Book (al-Kitab al-Malaki). It is one of the most comprehensive and well-organized compendia in early medical literature. In Europe the treatise was known as Liber regius or Pantegni and the author as Haly Abbas.(source:wiki)

Al-Majusi began his influential Arabic encyclopedia with a critical survey of his sources, which included Hippocrates and Galen as well as al-Razi. While commending al-Razi’s medical epitome dedicated to Mansur, al-Majusi criticized the Comprehensive Book on Medicine, the Hawi, for being too long (the modern printed version is incomplete at 23 volumes) and not well organized, since it had been intended as an aide-memoire and general medical record for al-Razi’s own private use. Al-Majusi stated that the Hawi was so enormous that few could afford copies of it, and that in fact he knew of only two people who owned a copy, “both of whom were people of culture, learning, and wealth.”

Of all physicians, the best known name is that of Abu `Ali al-Husayn ibn `Abd Allah ibn Sina, known to Europe as Avicenna. He was born in 980 (370 H) in Central Asia and traveled widely in the eastern Islamic lands, composing nearly 270 different treatises. When he died in 1037 (428 H) he was known as one of the greatest philosophers in Islam, and in medicine was so highly regarded that he was compared to Galen.

Ibn Sina’s magnum opus by which he was known East and West is the Kitab al-Qanun fi al-tibb or Canon of Medicine. It was composed over a lengthy period of time as he moved westward from Gurgan, in northern Iran, where it was begun, to Rayy and then to Hamadan even further southwest, where he completed it. The large comprehensive Arabic encyclopedia rivaled the popularity of al-Majusi’s compendium and in many quarters surpassed it. (source:wiki)

To expound it further lets read Ali Jafarey who writes ”

”In its thousand years of supremacy, Pârsi has shaped one of the most excellent and premium creative writing from the ‘a’ of ‘anatomy’ to the ‘z’ of ‘zoology’ on animals, art, architecture, astrology, astronomy, drama, food, games, geography, government, history, humor, literature, magic, medicine, music, religion (Zoroastrian, Manichaeism, Mazdak Movement, Islam, Sufism, Christianity and Baha’ism), science, ‘translation and commentary’ (from Arabic,Greek, Pahlavi, Sanskrit, Turkish and other languages into Pârsi), and other fields of the human life. Phonetically, it sounds sweet to ears. Its articulated vowels make it much less guttural. Its poetry is, perhaps, the richest in language, expression, inspiration, narration, rhyme, tune, length, height and depth in the world languages.

Well-known Pârsi authors, numbering around 400 persons, are not only writers, generally prolific, but simultaneously a combination of two or more as architects, artisans, astronomers, chemists, court flatterers, ecologists, fictionists, geographers, historians, linguists, litterateurs, mathematicians, musicians, mystics, philosophers, physicians, poets, politicians, rulers, scientists, teachers, technologists, theologians and zoologists.Among those known better in the Western World are: Abhari (Asir al-Din Abhari), Alpharabus (Abu Nasr Farabi), Avicenna (Abu Ali Sina), Biruni (Abu Reihan Biruni), Ferdowsi (Abol Ghassem Ferdowsi Tusi), Geber (Jaber Ibn Hayyan), Hafez (Khajeh Shams al-Din Hafez-e Shirazi), Haravi (Abu Mansur Movaffaq Heravi), Kashi (Ghyas al-Din Jamshid Kashi), Kharazmi (Mohammad Kharazmi), Khayyam (Omar Khayyam Nishapuri), Rhazes (Zakariya Razi), Rumi (Mowlana Jal al-Din Mohammad Balkhi), and Sa’di ( Sheikh Sharaf al-Din Mosleh Shirazi). Its Shâhnâmeh, the Book of Kings, composed 1,000 years ago by Ferdowsi Tusi, is unique in the World Literature. Consisting of 60,000 couplets, it begins in the name of ‘God of Life and Wisdom’, Who is higher than human conception and Who created the Universe and maintains and guides it. It praises Wisdom as the best Gift of God to humanity. God created the earth along with fire, air and water, and then the plants and animals. Mankind appeared in an erect posture. The human history begins from the days of cave-dwelling, vegetarian food, scanty covering and stone implements, through the discovery of kindling fire, turning to the ‘devilish’ meat eating, animal domestication, architecture, dress making, metal implements, medicine, commerce and navigation, to the invasion of Iran by the Arab Muslims and the end of the Sassanian Empire. That is where the Shahnameh ends. As a nationalist, Ferdowsi did not want to continue the History of Iran under alien occupation. ”