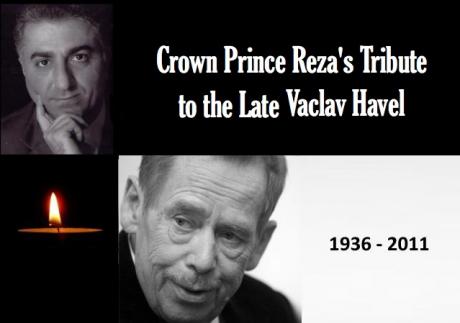 Tributes have been pouring in to Vaclav Havel, the dissident playwright who helped over throw Communism and became President of the Czech Republic, who died on Sunday morning. Crown Prince Reza Pahlavi (who met Havel in person a few years ago during a Conference in Prague) has shared his tribute to the inspirational Czech leader.

It is with great sadness that I join with the many millions who mourn the loss of President Vaclav Havel. He was a gentle man who changed the face of the world by standing up to tyranny and prevailing. Mr. Havel epitomized the essence of non-violent disobedience as a catalyst to bring about freedom and democracy, and he stands in history among other powerful, peaceful agents of change such and Mohandas K. Gandhi and Dr. Martin Luther King, Jr.

I had the honor of meeting Mr. Havel a few years ago at a Human Rights conference in Prague. He encouraged me with his words to continue pursuing the right of my fellow countrymen in Iran to have freedom, democracy, and human rights. The thirty-two year struggle of Iranians against the totalitarian regime ruling my homeland today is no different than the struggle for freedom and Human Rights that Mr. Havel led in the 1980s in his own country. His success proved that right always wins, and that freedom ultimately prevails. As I remember this great man today, it is with a profound sense of loss as well as with the inspiration to continue working to achieve freedom and democracy in Iran.

Tributes have been pouring in to Vaclav Havel, the dissident playwright who helped over throw Communism and became President of the Czech Republic, who died on Sunday morning. He was 75.