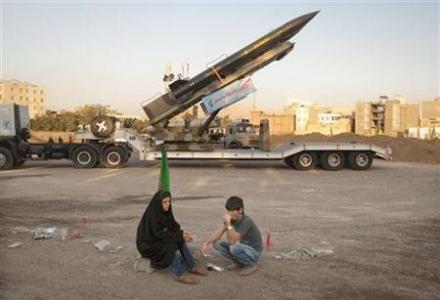 The warmongers are back, and this time they’re training their gun sights on Iran.

Just check out the Republican presidential debates, where almost all of the candidates cavalierly call for war with Iran as a standard talking point. Yet, while the Iranian nuclear program is a major challenge for American interests in the Middle East, not to mention the security of Israel and for global security altogether, we must resist the temptation to seek easy, quick fixes to this problem.

In the Middle East, there are no quick fixes.

Remember, quick fixes by dropping bombs is what the Bush administration told us was the solution to our problems with Saddam Hussein’s Iraq. They couldn’t have been more wrong.

Fortunately, cooler heads are sitting in the White House.

So it’s ironic that as the final American troops leave Iraq, closing a chapter on the most strategically flawed foreign policy decisions in American history, one that cost more than 4,000 American lives and a trillion dollars, the warmongers are back in the news, treated as credible experts.

For example, former Vice President Dick Cheney, the author of the Iraq war who now advocates for military action against Iran, should be ignored at all costs. Just this past week he said that the “right response” to Iran’s capture of an American spy drone would have been to order a “quick airstrike” to prevent the drone’s capture. Contrast this with former Chairman of the Joint Chiefs of Staff Adm. Mike Mullen, who knows a thing or two about war, and strenuously cautioned against inadvertent military clashes with Iran. I’ll pick Mullen’s military advice over Cheney’s in every instance.

Yet while such hyping of military action to resolve the Iranian challenge continues, the Obama administration has wisely committed itself to maintaining pressure on the Iranian regime through international cooperation on sanctions, and has publicly argued against military action while still not taking this option off the table. By maintaining this policy, the administration is keeping open the possibility of a diplomatic solution to the crisis.

Against this backdrop, two significant actions by the Obama administration this past month in Washington demonstrated that the president has smart red lines on Iran. It’s rare that an administration on the cusp of a re-election battle decides to reveal its position on an issue of paramount importance such as Iran, especially when it knows that it’s going to suffer a political cost at home. Yet that is what Obama, to his credit, has done, when he both opposed congressional moves to unilaterally impose American sanctions on Iran’s Central Bank and spoke out forcefully about the consequences of military action against Iran.

First, the Treasury Department opposed unilateral, extraterritorial sanctions against Iran’s Central Bank. It did so, arguing that not only would the sanctions undermine the international consensus against Iran’s nuclear efforts, but they would also enrich Tehran by driving up the price of oil. Counterproductive to the core, these sanctions would accelerate the regime’s grip on Iran’s economy, shutting out ordinary Iranians from economic transactions while ensuring that the regime that, unlike its population, has mastered the art of sanctions evasion would increase its power within the country.

And despite a 100-0 Senate vote for these sanctions, the administration ultimately prevailed and obtained national security waivers for the legislation to ensure that it would impose the sanctions at its discretion — not at the whim of political pressure from Congress.

Second, Secretary of Defense Leon Panetta clearly articulated that a war with Iran is not in our national interest and could have dire consequences for the region, including Israel. War would strengthen the regime internally, cause economic chaos, open up Americans to violent attack, and most importantly, not be effective at halting the nuclear program beyond one to three years.

But to the majority of Americans who want to avoid a repeat of the disastrous Iraq War that is finally over, it should be comforting that the White House is behaving responsibly on what can only be described as a very difficult issue. Instead of political pandering and promoting a reckless policy, Obama is making it clear that while he seeks to resolve the challenge from Iran, he also has policy red lines that should not be crossed.

So let us be thankful that, as this enthralling year of change in the Middle East comes to a close, President Obama has clear red lines on his Iran policy. In a year in which he vanquished Gaddafi, killed bin-Laden, and oversaw the successful conclusion to the Iraq war, we owe him this much.

This piece was originally published in the Pittsburgh Jewish Chronicle.

AUTHOR
Joel Rubin is the Director of Policy and Government Affairs at Ploughshares Fund. He is a former congressional aide and diplomat, having worked for two senior Democratic Senators on foreign policy, defense, and appropriations issues and at the State Department in both Near Eastern Affairs and Political-Military Affairs, winning numerous awards. Follow Joel Rubin on Twitter: www.twitter.com/JoelMartinRubin