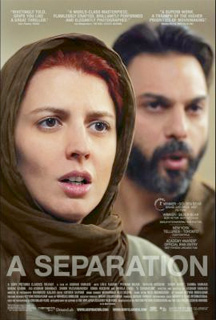 Apparently even in the boundless space that film provides, Iranian filmmakers cannot separate from horrible reality. Apparently we cannot even drift away and experience even a smidgeon of joy or god forbid laughter. Even in film. In Iranian film, apparently George Lucas or just the 6 or 7 Iranians that work at Industrial Light and Magic do not exist.

We are apparently condemned to films that express reality and then we are forced to sit in the dark and watch as our reality once again tears off the barely damp scabs, to open the wound anew. A wound that doesn’t even bleed anymore. It just stings. A lot.

This is honestly how I felt watching “A Separation”. A film that is reaping award after award as it soars across Europe on it’s way to Hollywood, where the Oscar buzz is most certainly buzzing.

After you acknowledge that the film is a dramatic extension of the recent documentary “Divorce Iranian Style” by Kim Longinotto and Ziba Mir-Hosseini, which is actually more interesting, even funny and altogether more enjoyable to watch than the sheer dread and fear you get in the pit of your stomach sitting through “A Separation”. Mind you, you paid to witness this, and bought popcorn (very bad idea) and everything.

To be fair, and to justify what I hope is a solid win in the category at the Oscar’s this time, “A Separation” is a very well made, even better acted film. About the process and tribulation of one Iranian family enduring a tragic separation and break up. Toss in the always reliable Alzheimers stricken parent, and you’re sadly good to go.

There was a slight salaciously sexy hook that I think could have sold the plot better had the story been more hope-filled and less depressing. But in combination with the latter, and considering the consequences, that pretty much turns you off from that fantasy. And honestly, in the sanctum and realm of fantasy that a movie-house is supposed to offer a cold and weary traveler, who, seriously who needs that? Especially Iranians do!

Led by an exceptional cast all around, but primarily the dynamic between Leila Hatami and Peyman Moaadi, the film is also Written, Directed, and Produced by Asghar Farhadi, no slouch when it comes to winning Eastern European film festivals with super sad well-made Iranian stories. Here are some of Farhadi’s best-worst stories he has brought to film:

2003 – “Dancing in the Dust”, a film about a recent divorcee with a prostitute mom who tries to pay back the loan he took out for the failed wedding.

2004 – “The Beautiful City”, a film about a sixteen year old boy convicted of murder, who is held until he is 18, so he can be executed. A fellow prisoner who is freed, tries to stop the execution.

2006 – “Fireworks Wednesday”, a film about 3 marriages in torment at once, interwoven with each other. Think “Crash”, for yet more doomed Iranian marriages.

2009 – “About Elly”, a film about 3 families on vacation, who take their single friend “Elly” to meet and hopefully get set up with a recently divorced friend. After a close call of an almost drowning, Elly goes missing. Hey at least there isn’t a “doomed marriage” in this one!

Which pretty much gives you an idea of the emotional roller coaster ride bent into “A Separation”. Nothing but nothing drives harder and harder, drills deeper and deeper, over and over and over again, in to the deepest recesses of the blissfully blind Iranian mind, than an Iranian filmmaker obsessed with one sad thematic idea. No?

“A Separation” and all of Farhadi’s films are shot extremely well, color, lighting, and in this film the music by Sattar Oraki is well chosen. And the timing, which as you can see in this article, is a very hard thing to get right.

I can’t even spoil the film for you, because like all films of this “Genre” and like the other of Farhadi’s, they are of course spoiler-proof. In that there is no obvious stated conclusion. The hero may either live or die, or lose or win, we’ll just never know. Which makes the exclamation point in Farhadi’s films even sadder and entirely un-uplifting.

Farhadi is a pretty damn good filmmaker. I only wish the stories he chose were more, well – happy. For once I would like to see an Iranian film that runs on laughter, works out tests and trials from adversity through to happiness, and ends by revolving around sheer joy. Is this too much to ask for? I thought you go to hell when you die, not while you are still alive on Earth! I’m not asking for a far out unrealistic heaven scene with an Iranian dancing around naked and happy in it, but Jesus or Mohammad if this is all we are going to get, one of you please come take me now!

I wonder if this may be why we don’t actually get to experience much joy as Iranians. Maybe we are the ones living on-screen in the movies? And our lot is actually a plot written about the real life that we think is one of Farhadi’s films.

So here’s le coup de grace de le palme d’or and Oscar this film is likely going to win. You WILL go see this film because you simply HAVE to see it (dahling!) when it wins a bunch of awards. But you will hate the story the whole time you are sitting in the dark trying not to squirm. You will then, in the lobby, afterwards, try to discuss it with your non-Iranian film buff friends who now think they know a little bit more about you, and Iran. You will feel sick to your stomach, you will try to out-rationalize that Iranian society is not as it was reflected in this film, shown in the West.

But you will not succeed in convincing anyone that Iranians are in fact frequently quite hilarious. Because you will be too sad.

Take a Dramamine. Don’t get popcorn.