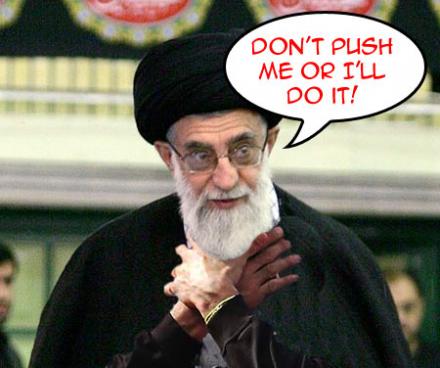 I was about to write a long winded typically “bitter-bahmani” introductory paragraph as an equally long winded explanation of the purpose of this Top 10 list. Then as usual, I was planning on poking Trita in the ribs just to try and make him giggle.

But then I replayed the whole idea in my head and decided I should just shut up and get right to the point. So I put the bitter remarks at the end instead.

WHAT THE US SHOULD HAVE SAID IN RESPONSE TO IRAN’S RECENT THREAT TO BLOCKADE THE STRAITS OF HORMOZ:

Ah! You guys! That was a good one….! bahmani was right, Iranians do have a great sense of humor.”

ANSWER 2: “Go right ahead boys. We don’t import any Iranian oil anyways, but may we remind you that you export ALL of it through the same straits, so if you want to do that, by all means, go right ahead, actually you can consider this as the next US sanction that you impose on yourself.”

ANSWER 3: “Unfortunately the Vice President of Iran, along with Iran’s Navel commander, even in combination have less power than the Mayor of Tehran, who like the President of Iran (a Navel engineer), among many other things he has no business speaking or thinking about, also does not control Iran’s military. However when Khamenei wakes up this week, tell him what you said, and if he agrees and after he has taken his monthly shower, if he actually concurs and signs the military order, then we will refer you to answer #2 above. Or better yet, see answer #1.”

NOW FOR THE RANTING:

The next move, like always is up to Iran. Basically (and as of this morning according to Abbas Milani too) this is all a big bluff by Iran. As I have tried to outline in a previous article (No, you look it up!), Iran’s entire US strategy revolves around numerous examples of taking “hostages” (1979, Hikers, UK embassy, and now the Straits), and merely holding them for ransom. Preferably US Cash, but Oh alright they will take Euros, in a pinch.

As you have seen the main reason Iran has given for this latest taunt, is the recent bout of sanctions coughed on it by the US. Essentially threatening to close down the straits next, if the US even sneezes just one more sanction on Iran.

Now to paraphrastically if not parenthetically poke Trita in the ribs: (Because he is a public figure, and I just found out that the Kardashians and Andre Aghassi aren’t actually Iranian, so who else am I going to chide and chastise? Wait! There is Googoosh… talk about doing nothing with all that power…)

1) Trita is right (What?) on the one hand, because if the US misplays this, and pushes Iran to the brink of losing face in having it’s childish tantrum bluff called and then they don’t actually follow through and block the straits after all, and then everyone on the block now thinks Iran is nothing but a bunch of panty-waisted, ninnies and noonoors, and loos bacheh koonie bitches (no offense to bacheh koonies), that might in fact high-school-locker-room-shove Iran into a whole different level of crazy.

2) Trita is on the other hand wrong, because in spite of NIAC’s position against them, the sanctions are in fact working. In an apocalyptic-hellfire-upon-earth-evoke-the-second-coming-of-the-seriously-pissed-off-Inca-Gods sort of way. Nothing but nothing has so far quite gotten a response and indeed the very dialog going, that Trita has also correctly suggested, is sorely missing from this pie-a-la-ghalamkash. Even inflammatory rhetoric is still better than no rhetoric at all.

As the famous American poet Spike Jones once said, “You always hurt the one you love”

Don’t get me wrong, Trita Parsi is the “Abbas Milani” of his day. At once they are both the most prolific sound-policy thinkers that we have, and at the same time, no one in power ever seems to actually want to listen or talk to them. Except NPR, CNN, Fox, and Al Jazeera. Wait, Al Jazeera is Fox.

Vali Nasr on the other hand, is the “Chauncey Gardner” of his day. May I remind everyone of Nasr’s genius, for it was the great Vali Nasr who recently said, “Today, America’s Iran policy looks to be in disarray.”

Nah Baba! Jeddi Migi? Genius! Sheer Genius! Give that man a beer, then give him a fellowship!