Someone, please Separate me from this movie 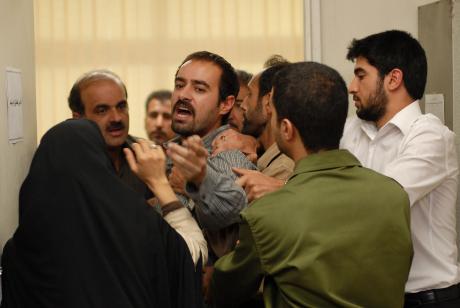 Bear me out for a few minutes. I know there are other goodies out there, and by now I am sure you have heard of the movie, Nader and Simin, A Separation, and you might have even read some of the more detailed reviews of the movie, and know about the plot, and the characters, but here is what I want to say about it:

Under the constant insistence by me, my brother, his family, and I watched this movie together last week.  This movie is so well made that throughout the movie I was thinking they should give the Oscar to this movie right now and get it over with. But, when the movie was over, as usual, opinions about the movie were asked, and when it was my turn, for a few short minutes I gave my usual speech, the movie was excellent, blah blah this, and blah blah that, but in reality I wanted to stop thinking about it, however when it was my brother’s turn to speak, he went on and on analyzing the movie, layer after layer, character by character, one moral issue after another, from one cultural point of view to another, social obligations, family obligations, personal well-being verses well-being of others, the legal system, individual behavior, what is right and what is wrong; and on and on and on…  I don’t know how long he talked, but he perfectly well understood the movie, which was about endless questions about moral code of conduct, ways of appropriate behavior, what is right and wrong under certain situations, and things to think about while you go on with your daily lives, something to think about when you wash dishes, and when you are conducting a meeting about mismanagement of your project resources. Most likely at some point in that span of time you will stop and start thinking about Nader and Simin, and their daughter, and who she is better off with when they get a divorce, and what is going to happen to the old man, and turaa khoda, turaa khoda give up on the divorce idea and try to make it work, together.  aakh, haalam beham khord az een hameh fekr!

I refuse to watch this movie again; it’s good, it’s excellent, don’t waste time, give them the Oscar right now, but I refuse to watch it again.  Some excellent movies I have watched tens of times.  Godfather, I have watched it at least twenty times.  But this movie; once is more than enough for me, not because this movie is a heart-wrenching one, which it is, but that’s not the reason why I don’t want to watch it ever again.  I have watched more heart-wrenching, more gruesome movies than this one before, some of them several times till I puked, but this one, I only want to watch once, and no more, because,,, because there are no right or wrong answers in life, so stop thinking about it.  There might be right or wrong answers in math, physics, in science, in legal terms, in, in, in ‘How many minutes to an hour?’, but not in what people have to do day to day to survive, in people’s daily lives, in a corrupt society, in the lives of the people in Iran, where you have to bend most of the rules to survive, there is no right or wrong answer, I know it.

So, what’s wrong with this picture!  Nothing, it’s excellent, except, it forces you to think, it is designed to make you want to think.  You are going to leave the movie theater without being in control of your own brain.  It keeps on thinking about it regardless of what you do! What is wrong with thinking, you might ask!  Well, I go to the movies to be entertained, not to think, not!  No, not really, as easily as I can be entertained by humor, horror, action, romance, etc., I can also be entertained by being forced to think, except I go to the movies to escape reality.  I don’t mind thinking about out of space creatures once I leave a movie theater; I know thinking about them is entertaining, but the reality on earth, in Iran, is a different kind of reality, I know that reality well, I know it is tangible, and I want to escape it.  I see people dangling from ropes and I want to escape that reality. I know there are diseases out there that will kill you gradually, in twenty miserable years, and I want to escape it.  I know sometimes people, with perfectly functioning brains, freeze in their disabled bodies so badly that they can’t lift a finger, let alone wipe the shit off of their own asses, and at the end they just die, I know there are people out there that have excellent bodies but no brain activities, and at the end they just die, without even knowing they were dead anyway, and I want to escape it. Otherwise, what’s the point of going to movies! I see the real reality every day.  What’s the point of telling me about its existence without offering a way out!  ‘Here come watch it and think about it!’  Give me a break!  I don’t want to think!  I went to the freaking movie to get away from it all, but you laid a trap for me and got me stuck, and like a quagmire I got stuck more, scene after scene, and got me thinking about these nasty moral issues for,,, who knows how long it’ll be! No!  Please, someone tell me the Alzheimer diseased man miraculously recovered and remembered every member of his family, and kissed them and hugged them, and they laughed, and lived happily ever after; and to top it off, he didn’t remember a damn thing about the Revolution, because that part of his memory was still gone.  Now, that would really be an excellent escape-the-reality movie!  Or better yet, a movie about people being hanged from cranes, except when they are about to get ready to pull up a condemned man, the crowd rushes in, like the men of Spartacus, and save him!  Speaking of Spartacus, that movie, I have watched at least twenty-five times.

But, don’t get me wrong, just because I don’t want to watch this movie again, it does not meant I did not like it.  On the contrary, I LOVED THE MOVIE.  Two thumbs up, five stars out of five, ten stars out of ten, 99 stars out of 100, but I am not going to watch it again.