Moby Dick Explains it all 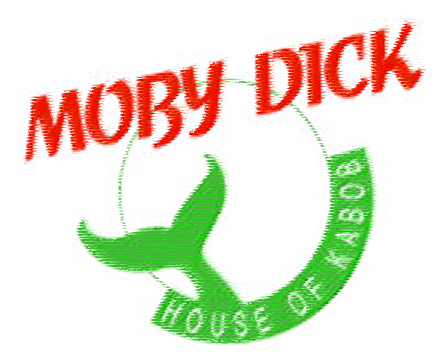 “But oh! shipmates! on the starboard hand of every woe, there is a sure delight; and higher the top of that delight, than the bottom of the woe is deep.”

I’m in DC for a job/project, and whenever I’m in DC for a job/project or for any other reason, right around the corner from PAAIA, and about 16 blocks from NIAC, too far to walk (poor NIAC!), on the opposite side of the corner from one of the only remaining Krispy Kreme shops around, when I can, when I remember, I try and frequent my favorite east coast Chelokababi. Moby Dick House of Kabob. Before you say it, skip it, trust me, I’ll deal with it at the end.

But just saying it makes me feel good. Moby. Dick.

Now, at Moby Dick, for about half what you would normally pay for a real sit down, white cloth table cloth, bona-fide, certified, Farsofied Italian/Mediterranean/Persian/Iranian restaurant, you will get a surprising number of traditional standard-fare state of the art Chelokababi dishes.

Let’s start with the Appetizers, shall we?

What? They missed the Maste-khiar you say? No, no, no, everyone knows that Mast-e-khiar is NOT an appetizer, but a side dish! Which you can correctly get a small, or a large portion. When it comes to Mast-e-khiar, I say, go large, or go home.

Doogh? Both kinds Baby! Bottled fizzy, but also home made. I prefer fizzy. I know.

Salads? check. Shirazi? Of Course! Add in any amount of Soup-e-Joe, Ash, Bastani and Shirini Chaie, time for all that later.

For now, shut up and pick your kabab, any kabab, but whichever kabab you pick, get the combo, so you can pick two kababs! Any one of the 9 different kabab combinations is wonderful. Well seasoned koobideh, tender barg or lamb, with the holy trinity of Joojeh (koobideh, boneless, and bone-in) bringing up the rear.

Surprising? Because this is supposed to be a fast food place. I say supposed to be, but thankfully the food does not come out so fast, so as to ruin it with that awful American spice of fresh ground Speed. Persian food is always best served like revenge, slowly.

You can do the fresh-baked-on-site oversized taftoon style sandwiches of it, if you’re in a rush, no matter, you’re going to get enough wonderful rice, mast-e-khiar and paneer-o-sabzi with it, whether you like it or not. Just that with the main platter portion you get more of the rice. The rice took me back to my younger days in Tehran and the wafting combination of saffron with the steam of rice, with the smokey char of kabab at the tip, or top. Depending how your nose and palate works.

While this is strictly a place to scratch your kabab itch, don’t think you can’t get your nasty Khoresht on. All three polos, Loobia, Baghaleh, and Zereshk, with Gheymeh-Bademjan and of course Ghormeh-Sabzi, which I am officially changing it’s spelling to “Gourmet Sabzi”.

Moby Dick, has 16 shops, exclusively in the DC/Virgina/Maryland area.

Now for the kicker.

As we all know (do we?) Moby Dick, is the most famous fish (*OK, water based mammal!) ever to confound man. It has destroyed many a mightier man. A fish* worthy of one of the greatest works of American literature, one that is required reading for every American (or permanent resident) in America. That fish*, would certainly be our fish*. The Pahlavan of fishes*! Not surprising then, that if Iranians, any Iranians, were ever to pick a name of a fish* for an inspiring endeavor, such as fast-fooding chelo-kabab, it would most certainly be the name of the biggest baddest fish* in history. Moby Motherfucking Rostam Dick!

But while indomitable fish* is the final word and symbol of inspiration, and the inevitable marketing pitch for “Moby Dick House of Kabob”, fish or any aquatic mammal for that matter are nowhere to be found on the menu.

The slightest head-nod to the supreme legacy of Dick, can be found at the very bottom of the list of admirable kababs,

“Fish kabob (Check with your server for availability)”

What I find continually stunning about Iranians in his day, and age, and particular spacial coordinates, is that only Iranians would choose the absolute best name ever thought of for a seafood restaurant, and then proceed to not serve any in it. Only Iranians would take the most classically American of all names, and serve the farthest thing imaginable from it, namely Chelokabab. Serving it with complete pride and without the slightest acknowledgment of the befuddling puzzlement on the faces of Americans who wander [in] and wonder just how they are going to order.

What should be fathomable, is in the end unfathomable. Maybe we are like the famed and fated white whale, at once strangely defiant, while utterly unaware of the degree of utter frustrating wrath that we have wrought by simply being.

“…for we are all somehow dreadfully cracked about the head, and sadly need mending.”