Neither War Nor Nuclear-Armed Iran 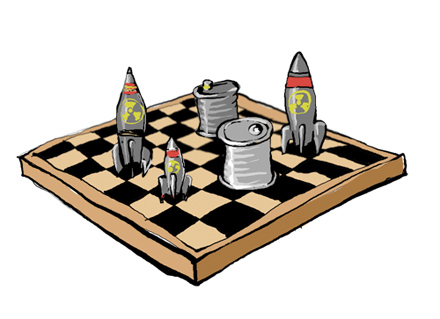 In his widely published op-ed entitled “Iran on the Warpath”, former German foreign minister Joschka Fischer has correctly emphasized the consequences of a potential war on Iran. Not only the democracy movement in Iran itself but also the “Arab Spring” would come to an end, Fischer writes. Moreover, the entire region would be thrown back into violence and terror, and be put in a situation nobody could control. Fischer also doubts whether the Iranian nuclear program could at all be prevented by war. Against the background of the unpredictable consequences of such a war, he calls for a diplomatic resolution with the “the burden of organising, convening, and conducting such highly sensitive negotiations fall[ing] on Europe.”

Fischer’s concerns and warnings should be taken seriously by every responsible politician and urge him or her to look for ways that could prevent the approaching catastrophe. It is however disappointing that his article does not address those considerations for a diplomatic solution. On the contrary, in his assessment of possible threats Fischer constructs a deadlock, which in the final analysis presents a war on Iran as the only possible alternative to a nuclear Iran. However, his plea to resolve the nuclear dispute diplomatically loses much credibility when he stresses that all previous rounds of negotiations had all led to an impasse. Fischer’s threat assessment can in any case be understood or misunderstood as an anticipatory justification of a Western–Israeli war on Iran. The alternative he constructs between “either war or a nuclear Iran” is a leitmotif in his text, which does not allow for a conclusion other than the inevitability of a war against Iran.

Fischer’s momentous choice between a rock and a hard place, which he floats as a suggestion, derives from the fact that he selectively reduces the overall security conflict in the Middle East to Iran’s nuclear program. Without doubt, the Iranian nuclear program – should it really lead to a nuclear weaponization – would bring about a great threat to regional peace and significantly exacerbate existing conflicts. However, an objective analysis of the conflict would certainly lead to the conclusion that the Iranian nuclear program is not the only reason for, but actually part and parcel of the nuclear conflict in the Middle East. Yet, Fischer arbitrarily excludes Israel’s nuclear arsenal and its means of delivery – including the nuclear-capable German Dolphin submarines, for whose delivery he himself was partly responsible as foreign minister. Just as if the over 200 Israeli nuclear bombs were the most natural thing in the world.

Apparently Fischer takes Israel’s monopoly over nuclear weapons for granted, not even worth mentioning. It seems that Israel’s nuclear weapons are part of a strategic status-quo for the West, which is closely related to the control over energy reserves and transport routes in the Persian Gulf. For his main concern about a nuclear-armed Iran is, as he particularly emphasizes, that it “would drastically alter the Middle East’s strategic balance.” Obviously, Fischer seems to have overlooked that the possibilities for the U.S. and the West to push through their strategic interests in the Middle East have already lost their material base. The new powerful energy consumers – China, India, Brazil and other emerging countries – have massively disrupted the old hegemonic oil price regime. Oil prices have become scarcity prices and will remain so.

It might be that Fischer also believes that the nuclear arsenal is a necessary guarantor for Israel’s existence. But this is a huge mistake which is evidently also committed by Israel’s leaders. The Israeli élite exploits the real security needs of its own population in order to continue occupation and war against the Palestinian people and neighboring countries. However, a strategy based on nuclear arms, occupation, and confrontation, in no way serves the existence of Israel, but jeopardizes it to a highest degree. Only its enemies can wish the people of Israel security based on nuclear weapons and war, but not its friends. The security of Israel can only be permanently guaranteed if Israel stops embedding itself as an alien element or bridgehead of the West, but instead acts as an equal state in the region recognizing the rights of the Palestinians in accordance with UN decisions, and lives in peace with its neighbors.

Instead of insisting on strategies of power policy and anachronistic beliefs while putting the case for a “either war or nuclear Iran” specter, Fischer should rather support solutions aimed at sustainably guaranteeing peace in the region as well as the rights of all its peoples, including Israelis and Palestinians. One proposition opening up such a perspective is already on the table: the establishment of a WMD-free zone in the Middle East. It would be an unforgivable mistake to push aside such a proposal as being unrealistic. After all, the 2010 UN Review Conference of the Parties to the Treaty on the Non-Proliferation of Nuclear Weapons (NPT) decided to launch a conference for a WMD-free zone in the Middle East from 2012 onwards. It is most disturbing to see political parties and the media remaining silent about this UN conference. In fact, this conference would overcome the deadlock over the one-sided and selective diplomacy towards Iran that has failed so far. Moreover, it would provide the Islamic Republic with a platform to openly negotiate an end to the nuclear arms race in the region.

It seems that the fear is justified that a Middle East free of nuclear weapons would shift the “strategic balance” in the region (i.e. the pre-eminence of the West) as much as a nuclear-armed Iran would do. In fact, both alternatives contradict the actual or supposed interests of the transatlantic alliance. In contrast to the alternative of a “nuclear Iran” – leading to a nuclear arms race and potentially to wars with disastrous consequences including posing a serious danger to Israel’s existence –, the solution involving a WMD-free Middle East would allow lasting peace, disarmament, and the perspective of common security and economic cooperation.

The objection that the proposal for a WMD-free zone is illusory because Israel is principally opposed to it is absurd. Israeli leaders have rejected the proposition because they would have to pursue policies in total opposition to their current ones. Even in Iran there are forces trying to legitimize their existence by way of chaos and conflict. The two regimes, both in Israel and Iran, are acting for the purpose of maintaining power and against the interests of their peoples. The world community must not be discouraged by these forces and should make every effort to enforce the UN proposal. In order to facilitate Israel’s consent towards the concept of a zone free of nuclear weapons, NATO could for example offer membership for Israel and thus its protection, which would certainly be more effective than any own arsenal of nuclear weapons.

Israeli leaders and the fundamentalist forces supporting them will finally need to realize that the era of occupation and their monopoly on nuclear weapons in the region is coming to an end, and that the continued occupation of foreign territories constitutes the great danger of Israel’s demise. And the radical and fundamentalist forces in Iran should also take note that with verbal attacks and foe images they will finally isolate or even ruin their country.

The prospect of a Middle East free of nuclear, chemical, and bacteriological weapons would not only render the solution of the nuclear conflict with Iran possible, but also facilitate the resolution of the Israel–Palestine conflict as well as many other ethnic and religious conflicts in the region. This would also deprive the fundamentalists from their support and help the newly flourishing democratization process in Iran and the Arab countries to successfully unfold. The goal of reshaping the Middle East via a policy of common security and economic cooperation is exactly the path that Europe took after two world wars resulting in 30 million war victims and terrible destruction – it is therefore no utopia, but quite real. It is, however, essential to place the steps towards that aim on the world’s political agenda, here and now.

* Dr. Mohssen Massarrat: Professor emeritus for global politics and economics, peace and conflict researcher, University of Osnabrück (Germany). For many years, he served as an ombudsman for the Heinrich Böll Foundation, a public education think-tank affiliated to the German Green Party. Author of more than 20 books, he has most recently spearheaded the civil-society initiative for a Conference for Security and Cooperation in the Middle East (CSCME). Website: http://mohssenmassarrat.weebly.com/.

* Dr. Bahman Nirumand: Writer and author of the widely read “Iran-Report”, a monthly account on Iranian domestic and international affairs, published by the Heinrich Böll Foundation. A book he published in 1967 (later translated into English with the title Iran: The New Imperialism in Action, with an afterword by Hans-Magnus Enzensberger, New York: Monthly Review Press, 1969) contributed majorly to the internationalization of the German student revolts of that time. More recently, he is the author of Iran: Die drohende Katastrophe [Iran: The Looming Catastrophe], Cologne (Germany): Kiepenheuer & Witsch, 2006.