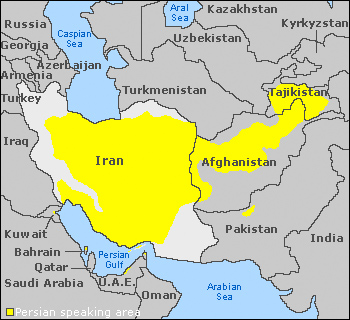 When Mustafa Kamal replaced the Arabic alphabet with the Latin one in Turkey, the Iranian government, which had been pondering a similar measure for a while, decided not to follow suit. The decision had been preceded by much soul-searching among the country’s top literati, who concluded in the end that a change of script would cut Iranians off from the rich literary heritage of the Persian language. Considering how alien Ottoman literature has become to the vast majority of Turks, one has to admire the lucidity and foresight of the statesmen who insisted on keeping the charming old squiggles, in spite of their acknowledged shortcomings. But even the most well-intentioned policies can have unanticipated consequences, and in the case at hand the unanticipated consequence is an abomination called Pinglish.

When I first encountered this portmanteau word, a blend between ‘Persian’ and ‘English,’ I thought of course of Spanglish and Hinglish, i.e., the vernacular spoken by Hispanics and Hindi-speakers who lace their English with Spanish or Hindi words that are either untranslatable or have English equivalents that simply do not convey the culture-specific nuances and emotional tenor of the original. As the children of the Iranian diaspora become English-speakers, they are creating their own dialect: somehow “Khaleh-joon, please pass the tahdeeg,” sounds more satisfying than “Maternal aunty dearest, please pass the rice crust from the bottom of the saucepan.”

Having had a father who was a language teacher and who always insisted that I do not mix the two languages with which I grew up, I am by temperament a purist; marshaling the multicultural sensitivity to find any merit in community-specific dialects does not come easily to me. I need not have struggled against my own instincts, however, for Pinglish, I learned, is not a hybrid English but simply Persian written in Latin letters. There is nothing remarkable in that, for Persian has been written in all sorts of alphabets: Iranian Jews used the Hebrew script until the dawn of the 20th century; Tajiks in the Soviet Union were forced to use the Latin alphabet between 1928 and 1938 and the Cyrillic alphabet thereafter (and have come to be perfectly happy with it); and in today’s India Persian is sometimes written in the Devanagari script, the knowledge of Urdu nasta‘liq having declined thanks to Partition. One alphabet Iranians have never used is an Iranian one, for in their 15,000-year (by the latest count) history, they have never bothered to invent one. And there is no reason why they should have, since first the Sumerians and later the Phoenicians and Arabs created writing systems that could so easily be adapted for use by them. Where, then, is the English in Pinglish? Why not, say, Pertin?

The answer is obvious, if a tad depressing: other European languages have simply fallen off most Iranians’ lingual radar screens, which means that the Latin alphabet has come to be associated almost exclusively with English. Before the revolution Iranian stamps bore inscriptions in Persian and (always correct) French; since the revolution they have been labeled in Persian and (sometimes atrocious) English. English has taken over, as it has in the rest of the world, although loanwords like muzeh, gisheh, and rofuzeh remain as reminders of French cultural ascendancy, not to mention the word farangi, meaning Christian Westerner and harking back to the Germanic tribe that gave its name to the land of the Gauls. Still, in the case of Iran this uncontested supremacy of English is not devoid of a certain irony, considering how much abuse the English-speaking nations have been subjected to in the official Iranian media for the past three decades.

Since successive Iranian governments have neglected (like the Koreans and Israelis, but unlike the Greeks or Chinese) to announce an official Latin transliteration (in which one Latin letter always stands for the same letter in the local alphabet) for the official language of their country, Iranian internet users who are not computer-savvy enough to make use of the Arabic script have no choice but to resort to transcription, where Latin letters are used for the sound they evoke in the reader’s mind. And what sound the letter evokes is conditioned by English, if that is the only foreign language you are familiar with. The trouble with this is that there is probably no major language less suited for such use than English. French, German, Italian, and Spanish all have regular orthography: if you know the rules, you know how to pronounce a word. But in English, to recall George Bernard Shaw’s famous quip, ghoti could conceivably be read as fish: gh as in enough, o as in women, ti as in nation. That is the spelling system Iranians are stuck with! Occasionally it allows for some cross-cultural creativity, especially on restaurant menus – one thinks of such delicacies as Ash Joe (barley soup) and Gourmet Sabzi (meat stew with herbs). But on the whole the transcription of Persian words and names into Latin letters has been haphazard and immensely incoherent, as anybody who has tried to find an Iranian’s name in a Latin-script telephone book can attest.

Consonants do not pose much of a problem, except for the (rather rare) ﮋ (sounding like the s in the word ‘measure’), which is usually rendered as a j (as in the surname of Iran’s beloved president), although j also stands for the letter ﺝ, which in Persian sounds like the j in the aforementioned Joe. One could also point out the obstinate use of the digraph gh for ﻖ, which is doubly objectionable. First, it wastes the letter q, which is a pity, since one letter is always preferable to two (think of the possible confusion if you want to write sagha, ‘dogs’). Second, it is complicit in the conflation of ﻖ and ﻍ, where it is only the latter that should be rendered as gh, as it is a voiced kh, like the guttural French r. In the Persian of southern Iran and Afghanistan and in Tajik the distinction between ﻖ and ﻍ is still routinely made, and there is no reason to give in to the sloppiness of the people of Tehran, who have forgotten about it and pronounce the latter like the former.

These inconsistencies are minor inconveniences in comparison to the problems posed by vowels. One problem is that the letter a has to do double duty for two very different sounds, as a result of which bastani can mean both ‘ice cream’ and ‘ancient’. On a French keyboard one can easily differentiate between bastani and bâstâni, but that takes an effort on English keyboards most users are unwilling to make. Oddly enough, however, the greatest confusion surrounds the long u (as in ‘fool’). In the nineteenth century, when French was the primary foreign language in Iran, Iranians started using the digraph ou for it, which was functional so long as one was consistent and used French spelling throughout. But now English has taken over, and the ou is not only obsolete but also highly dysfunctional, for which ou are we to go by: ou as in thou, thought, through, though, tough, trough, tour, tournament, or tremendous? Although the ou is pronounced in (at least) nine different ways in English, somehow it survives, resulting in such inconsistent spelling as, to take two random examples, Houshang and Gougoush, which should be Hooshang and Googoosh in English, or Houchingue and Gougouche in French. But even if we settled on the oo we would have a problem, as oo sounds differently in foot, food, flood, or floor, not to mention (now that I am being a pedant) cooperate or coordinate.

If Iranians had followed the same policy as the Turks, there would be no problem, of course: Huşang and Guguş are quite unambiguous Latin-script renderings of the two names. An unsettling thought, isn’t it? It seems to me that the only way out of this mess is for the governments of the three Persophone states to agree on a common Latin transliteration.